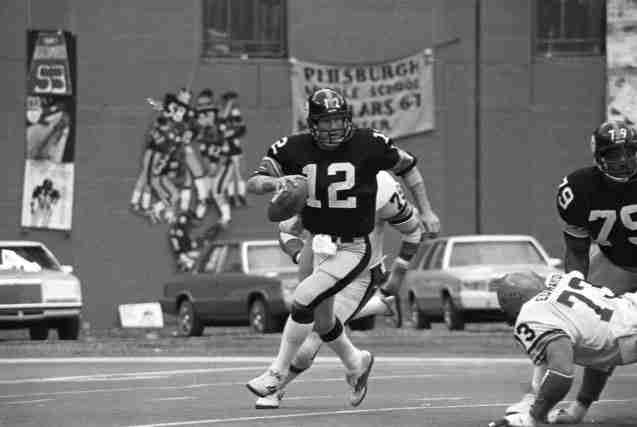 The former #1 overall draft pick in 1970 had struggled in his first five regular seasons, averaging just 1,504 passing yards per season, while throwing 48 touchdowns and 81 interceptions.

But in the 1974 playoffs, something clicked.

In wins over the Buffalo Bills, the Oakland Raiders, and finally, in the Super Bowl IX against the Minnesota Vikings, Bradshaw played the best football of his career, steadying himself long enough to let a powerful running game led by Franco Harris, and legendary “Steel Curtain” defense dictate the tempo of games and slowly bleed out opponents.

In 1975, Bradshaw set a career high in passing yards, posted a 2-to-1 touchdown to interception ratio, was named to the Pro Bowl and guided the Steelers to a victory in Super Bowl X.

Over the next four years, the Steelers won two more Super Bowls (XIII and XIV) because of Bradshaw and a ferocious defense, not in spite of him.

The evolution of Terry Bradshaw as a quarterback can be neatly surmised via a casual glance at his statistics in each of the four Super Bowls which he participated in and won.

From throwing just 14 passes for 96 yards and one touchdown in his first Super Bowl, to throwing 21 for 309 and two touchdowns and winning the MVP Award in his fourth, Bradshaw rebuilt himself and completely changed the trajectory of his career.

After a brutal first five years as a professional quarterback, Bradshaw was named NFL MVP in 1978 and was the first quarterback to win three, and then four Super Bowls, collecting two Super Bowl MVP awards in the process on his way to Canton, Ohio and a spot in the NFL Hall of Fame.

I spoke to Terry Bradshaw about his progression as a quarterback, the Super Bowl, and the Steelers dynasty of the 1970s.

As a rookie, you were the first overall draft pick, and in the ensuing season, you threw a league leading 24 interceptions and split time with Terry Hanratty. What are your thoughts on that year in hindsight, after all the success?

Terry Bradshaw: “Well, I came up out of a small school where I was not exposed to the media, not exposed to fans, what it was like to have a bad game and the repercussions. So being booed, being ripped in the papers, this was all new to me. I had to learn how to be a professional, I had to learn how to study, I had to learn defenses. It took me a while. I wasn’t a real student of the game, I never really was one even as the years went on. I was never a guy that could sit down and just pound out tape after tape. Now, it’s a lot easier. Back then, tape would break and you’d have to glue it back together. I could sit there and my coach could tell me the coverages they would use, take all that information and put it on a piece of paper, go through all the plays and everything, and I would know what to do. I learned how to be a professional and it was brutal. Being booed and being called all those horrible things left a lasting impression on me. I never forgot it.”

How many times has your last name been altered to “Bad-shaw” in a story headline after a rough outing?

Terry Bradshaw: “Oh gosh, I don’t know. I will say this to ya. If you do, you’re not coming up with anything new. I’ve been asked a lot of strange things and I always answer them. But nothing surprises me anymore.”

How different is your life if the “Immaculate Reception” doesn’t happen?

Terry Bradshaw: “The ‘Immaculate Reception’ did nothing to help me; we won a game and got beat the following week. It’s voted a great play every year, but not much. It wouldn’t change anything.”

Before winning four Super Bowls in six years from 1974 and 1979, in 1972 and 1973, your Steelers teams made the playoffs for the second and third time in franchise history, but lost in the AFC Championship after the “Immaculate Reception” and the Divisional Playoff the following year. What did you get out of those losses and what did they help you address?

What makes the Steelers teams you were a part of so transcendent? 40+ years ago and everybody still remembers all the key players and components. Part of it is because you won, but a lot of other good teams won the Super Bowl that no one remembers. Was it the personalities of the team, guys like you and Franco Harris, Rocky Bleier and the “Steel Curtain” defense? Or was it something else?

Terry Bradshaw: “I think it was because of the defense; we had a great defense. We had a great defense that would transcend into any era, today’s game, very easily. We had big corners, 6’3″. We had big safeties, 6’1″, 6’2″. We had big guys. We had fast linebackers, quick linebackers. We had a Hall of Fame tackle in Joe Greene who was 275 or 280 and quick, strong. Power running game. Bombs away offense. It’s an offense and a defense that moves right along as time moves along. And today, if you were to see the Steelers, we’d be Seattle; that’s who we’d be. When you’re looking at Seattle, you’re looking at Pittsburgh.”

Super Bowl Radio Row – What’s It Like In Person?