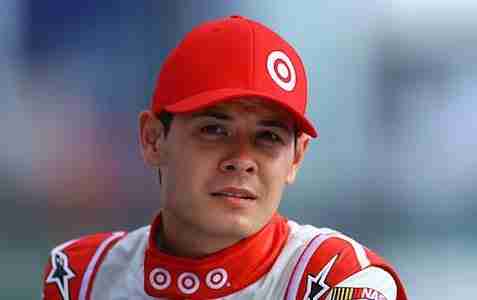 What were you doing when you were 21 years old? For NASCAR Sprint Cup Series driver Kyle Larson, the answer is driving the #42 Target Chevrolet, going head to head with NASCAR legends like Jeff Gordon, Jimmie Johnson and Tony Stewart.

“Being only 21-years old, I get to race against a lot of guys who have been racing since I was a toddler,” said Larson regarding his rookie season. “It’s neat to race those guys, especially Jeff Gordon and Tony Stewart. It’s going to be a lot of fun, but hopefully I can beat them.”

Larson made his Sprint Cup Series debut in last week’s Daytona 500 and was slowed early on, finishing 38th. But he followed that up with a 20th place finish at Phoenix this past weekend.

A rookie hasn’t won a Sprint Cup race since Joey Logano in 2009. Then again, no rookie has been hailed by both Jeff Gordon and Tony Stewart as a can’t-miss prospect.

The Elk Grove, California native has gone from being a local driver to a Sprint Cup driver in just two and a half years.

“I started racing when I was seven. I think it’s a lot tougher now to get to the top level because there are so many kids who are good and sponsors are hard to come by, so you definitely have to catch all the right breaks and I do think you have to start when you are young. You almost have to start out when you’re five to seven years old.”

Speaking of youth, one of Larson’s favorite aspects of being affiliated with Target is the work he does with kids.

Last month, he met with the kids at Target House in Memphis, Tennessee, which provides patients and their families a free, long-term home-away-from-home while undergoing treatment at St. Jude Children’s Research Hospital.

“I get to do a lot of things for Target outside of racing their car for them,” said Larson. “Last year in Phoenix, I got to help remodel a school library at an elementary school and got to give the kids, 17 of them, new books, computers and iPads that go into their library. Target gives around $4 million dollars a week for charity. So that’s really cool.”

“The kids get excited because they get to watch somebody on TV they know, and root for them. So it’s great to see the smiles on their faces.”

For people who are unfamiliar with NASCAR, it may seem easy to get into a car, make a few hundred laps and win a race. But it’s a lot more difficult than that.

“Overall setup of the car, of the chassis, is a pretty big deal,” said Larson. “I’d say it’s 60% car and setup and 25%-35% driver. And you gotta have some luck also. You can’t take anybody and throw them into a good car and make them a good racer.”

“I think why I am as good as I am is because over the past four or five years I’ve raced a ton. NASCAR drivers only get to race 36 times a year, and up until now, I’ve raced 100 times or more per year.”

Larson has proven himself at every level prior to the Sprint Cup Series, which is what has a lot of people excited enough to tout him as an early favorite for 2014 Sunoco Rookie of the Year. “The rookie of the year battle is going to be really good with Austin Dillon and the other rookies,” said Larson.

But the seemingly immediate success in NASCAR was the result of years of work.

Larson’s parents met on a race track, and he attended his first race a week after birth. He started racing go-carts at age seven, then progressed to open wheel cars as a teenager.

In 2007, at age 14, he became the youngest Sprint Car driver ever allowed to participate in the state of California. He won the 2011 4-Crown Nationals at Eldora Speedway, winning in all three types of USAC cars in a single night, only the second driver in history to accomplish that.

Larson joined the NASCAR “Drive for Diversity” program in 2012, and with his victory that year, became the first program participant to win a championship and Rookie of the Year award. He is also the first graduate to make it to the Sprint Cup.

Even with all the success and ascension through the ranks, Larson still gets excited before every race.

“It’s always fun. It’s going to be a really good year, I hope. I enjoy everything I get to do and am really loving life now… Racing is my main love. So anytime I get free time, I’m trying to go watch a race or compete in one. It’s my main passion so I try to put 100% into it all the time.”