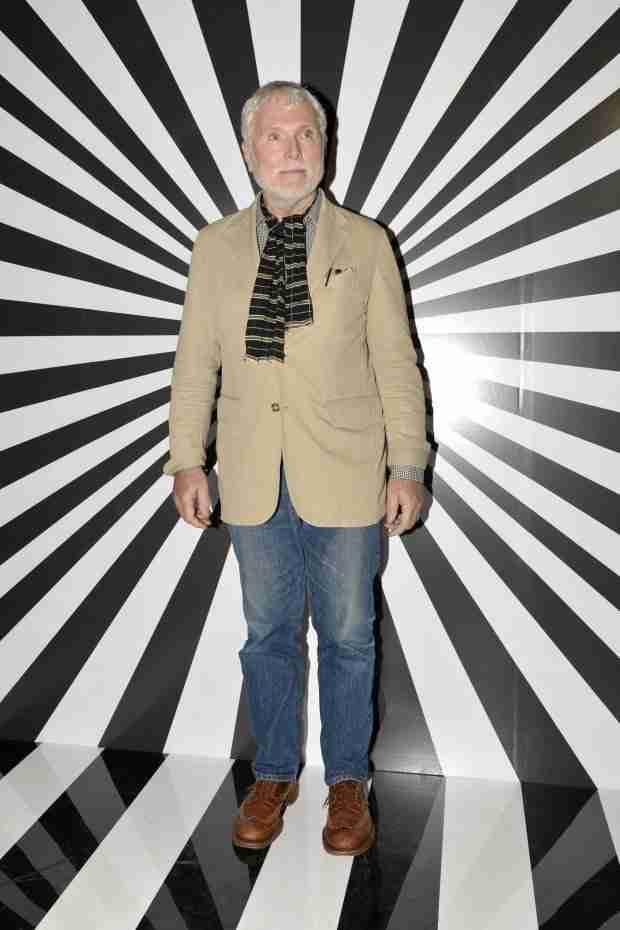 Glenn O’Brien has done a ton of cool things. He was editor of Andy Warhol’s Interview magazine, and then the first Editor-at-Large in magazine history at High Times.

He produced and starred in Glenn O’Brien’s “TV Party,” which David Letterman called “the greatest TV show ever,” and he wrote and produced the film “Downtown 81,” starring Jean-Michel Basquiat. He has also worked as a stand-up comedian and an advertising creative director and copywriter.

I spoke to Glenn about when growing a beard doesn’t work, how to handle thinning hair with style, and the new 2015 Dove Men+Care Hair and Face range of products.

What are you doing with Dove?

They wanted someone to talk about their new line of grooming products and it’s something I know about. During the whole awards show season, we’re talking about how men can achieve the looks that one sees on the red carpet and improve their looks. I like the old sort of Renaissance Man idea, where you might not know everything about everything, but you know something about everything. It makes for a well-rounded person. And Dove is here to help you look like you know what you’re doing, even if you don’t, as far as grooming.

Out of the entire line of Dove Men+Care Hair and Face products, which is the best product? What is the one that a guy can’t live without?

For me, speaking as somebody who’s not in their 20s, I think the hydrating products are really important. Because that’s something that most men who aren’t in show business or in the public eye tend to maybe not take care of their skin. Somebody threw a figure at me, like 50% of men never wash their face. The Dove Men+Care Hydrating Face Lotion, if you do that every day, you’re going to see the results. You might see the results in a month, but you’ll really see the results in 10 years.

As a stylist and creative director at varying points in your career, what do you place more emphasis on: emulating what’s hip or cool, or embracing a natural strength?

Good style is always personal, not just trying to look like everyone else. It’s going with what you’ve got and what you want to project. That’s the way I approach it.

What’s the most common male grooming mistake you see, amongst all ages, all ethnicities? Is it a unibrow? Is it neck hair?

I think in the general population, I think you see a lot of guys, now that we’re living in the new age of beards, you see a lot of guys trying to achieve a false jawline by trimming their beard, and thinking that is going to cover up for being a little overweight or whatever, give them a crisp jawline. Usually it backfires. And it just makes them look, like, you know, worse. It’s surprising, because you see it on a lot of sports anchors and people you think would know better because they get a lot of public exposure, but I guess nobody wants to be the bearer of bad news.

Being in the public eye for over 30 years, can you talk about your experiences going from a “spring chicken” to more of an “experienced guy” and pulling it off gracefully?

You have to go with the natural progression. It’s funny because that’s the whole issue with the idea of the comb-over. People are trying to pretend they have the same hair they had ten years before, when it’s just not there anymore. Michael Keaton is a really good example. Because I think if you’re losing your hair or severely receding, the best strategy is usually to go short. You still have hair and people notice it, but it doesn’t look like you’re trying to present yourself as having a youthful, full head of hair. I felt like at the Oscars; I saw a lot of people trying to extend their hairline to places it really isn’t.

Is there a tasteful way to do that, or just go short?

I think going short is the most effective. Otherwise, you’re going to be found out. One thing you notice a lot of is guys trying to have a sort of architectural look to their hair. Like Eddie Redmayne. He’s really a good-looking guy, but his hair looks like it was designed by Frank Gehry; it seems like architecture, almost. If you’re a handsome young guy, you can pull it off.

Also now I feel like we see a lot of verticality in hair. It’s okay, but it’s not going to really make you taller. I was thinking about Ryan Seacrest when I said that. He’s kind of developed a nuclear warhead hairstyle.

I always thought it was just to take the focus off of his nose. It’s really weirdly misshapen.

Well maybe it is, because I never really noticed it.

When you look back on things you’ve written 20 years ago, 30 years ago, is there any of it that you look at that you can’t relate to anymore and you just don’t like to read?

Not really so much. I don’t do a lot of revisiting of stuff from early in my career. No, I don’t think so, nothing I’m ashamed of. I have recently looked at things I wrote about art and was surprised to find that I thought it was good.

I think I’ve gotten better. I think when you’re a writer, I think one of my motivations was to be able to just continue my education. Being a writer is a kind of way to carry on with your scholarship, in a way. Also, I think you get more confident. You get used to expressing yourself and maybe you get better. I mean, you should get better. We’re used to people peaking in their 30s or something because we put a lot of emphasis on sports and things like that, where it really involves your whole body. Now they’re talking about Tom Brady (at 38) being an old man. Time to take up golf (laughing).

With an increase in digital media, would “TV Party” have the same success now as it did then?

The difference between public access cable and YouTube was that we didn’t really think that there were that many people watching. In a way, looking at “TV Party” is almost like anthropology, because we were kind of just doing the show for fun. And we didn’t expect to get any kind of global reach with it. But because it’s in the archives, now it’s interesting.

I think from my generation, a lot of people that got into music, art and whatever creative form didn’t have such high expectations as far as global success as people do today. If you were to ask a kid, “What do you want to be when you grow up?” They say, “Famous, rich.” They don’t say, “Guitar player or writer.” It’s more about being a celebrity.

SUCCESS: What I Learned From Ludacris, Mike Trout, Terrell Owens, and...

Eric Stonestreet Isn’t Gay – Not That There’s Anything Wrong With...