The concept of a sports dynasty is a largely subjective thing. If a given team wins enough titles in an allotted period of time, it is a “Dynasty.” 100 years from now, people will look at the New York Giants’ recent Super Bowl run and potentially refer to it as a Dynasty. In fact — somewhere in a dingy Secaucus, New Jersey bar — this is undoubtedly happening right now.

But does anyone seriously consider the recent Giants to be better than the St. Louis Rams teams of the 2000s?

What killed the Rams being regarded as a dynasty was Mike Martz and his stupid, inexplicable boner for Marc Bulger. Martz was hell-bent on benching the man with the greatest statistical three-year run in NFL history, Kurt Warner, for nerd-ling Bulger. Bulger’s game was much like his personality — robotic and completely dead inside.

The Bulger problem was indicative of a greater issue — Martz was a terrible personnel man and an even worse coach.

Martz gets so much credit for being an “offensive genius,” but the real genius was Vermeil. Martz knew that sex sells and a big cocked, productive offense covered up a lot of other “holes” that would gape more largely with each passing season.

The Rams led the league in offense and scoring for three straight years from ’99-’01. But, in ’02, when Martz made the ludicrous switch to Bulger, the offense took a big shit (23rd in points), but the defense — the unsung hero to that point — also fell to 23rd, after consistently leading the league in turnovers.

Suddenly, the Rams couldn’t score points. Coincidentally — at the exact same time — Kansas City, Vermeil’s new team, became the most productive offense in the league, finishing 1st or 2nd in scoring in three of the next five years.

So, who is responsible for the Rams failing to become a legit dynasty by winning at least two Super Bowls?

And — in “Great Gatsby-esque” fashion — he passed himself off as an offensive genius, when all he did was work for Vermeil, the true mastermind, at the right time — a monkey could have done the same job.

The Braves, just like the Rams (and Lindsay Lohan, who I would definitely still raw dog right now), were an absolute doormat for years. In 1991, it all turned around.

After winning 65 games in 1990, Atlanta hired Bobby Cox, immediately won 94 games and made the World Series — where it lost to Minnesota in seven games, in what was the most entertaining World Series I’ve ever seen.

Equally entertaining was the Braves’ seven game NLCS victory over the “Killer B”-led Pittsburgh Pirates, including a dramatic bottom of the ninth, in which ATL scored three runs to win the game and the pennant — Sid Fucking Bream, bitch!

In 1993, Atlanta had its best regular season yet, winning 104 games. People started taking the Braves for granted. Atlanta took itself for granted and lost to the Philles in a six-game NLCS.

But people began to talk shit because ATL couldn’t win the big one.

Best starting rotation in the majors. Terry Pendleton won the MVP in ’91 and was 2nd in ’92. Deion Sanders led the league in triples. Young David Justice looked like a future HOF-er. Ron Gant’s ARMS!

The strike happened in ’94 and the Braves didn’t win a thing (so sad that the Montreal Expos were the best team in the majors after 114 games and got absolutely no recognition, unless you count getting their roster raped by every other MLB team and then the forcible relocation of the franchise).

In between those two WS appearances, Atlanta made the NLCS twice … and lost in six games, both times.

In eight seasons (excluding the strike year), the Braves appeared in five World Series and three NLCS — but 14 straight division titles and only one WS victory, “does not a dynasty make.”

So, what’s the point of this article?

But I do know that the line between a recognized “sports dynasty” and a “perennially good” team is razor thin, like John Waters’ mustache.

Maybe we should loosen our standards a little, like Lindsay Lohan at a keg party in ’99, or take Riggo’s famous advice to Sandra Day O”Connor and, “Loosen up, Sandy baby.” 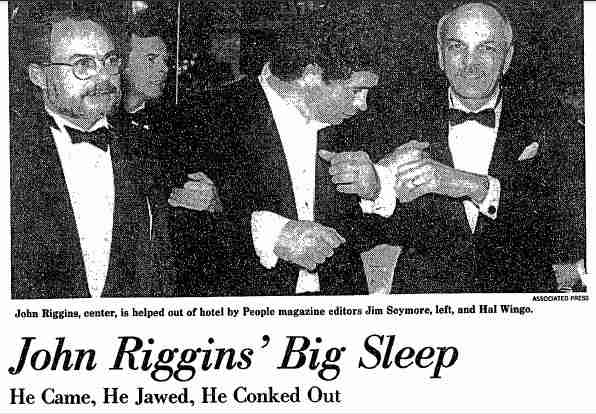 Riggins told Roll Call that he was nervous around such heavyweights, and so to “loosen up,” he had a few double scotches and chased that with several glasses of wine — all on an empty stomach.

The 240-pound football player also slept on the floor for an hour as Vice President George Bush and other dignitaries spoke to the crowd of 1,300 at the Washington Press Club’s annual salute to Congress banquet Wednesday night.

Riggins was later helped from the room by two editors of People magazine who had been seated at his table.

Douglas Woloshin, Riggins’ agent, said he spoke to the player Thursday, and “he said he had a good time — a very nice time, in fact.”

Being a perennially good sports dynasty is a lot like being married — you can do 99% of everything right, but, if you fuck up that 1% (lose the World Series or squander a Super Bowl), that’s all anyone remembers … and it will be incessantly hammered into your skull anytime your spouse gets drunk, or any time she is sober — i.e. ALL THE FUCKING TIME — despite absolute excellence the rest of the time.

So, let’s all lower our collective standards and have sex with someone at least four points (on a scale of 10) lower than us, tonight.

Then, during that post-coital cigarette, we can finally appreciate what the Rams and Braves accomplished.

Related reading since you stuck around this long: