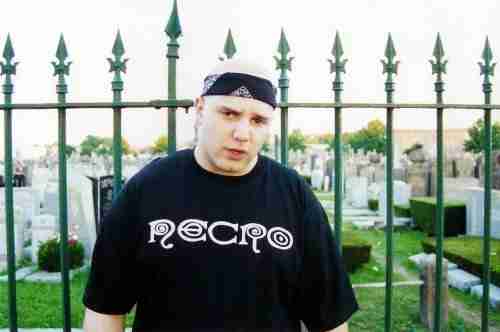 The first time I ever heard Necro was the winter of 1999 in East Chicago, Illinois hanging out with a bunch of hip hop heads.

While Britney Spears, Lou Bega and TLC were dominating the radio, these guys were listening to underground hip hop artists like El-P, Non-Phixon and Necro — all the time.

And it blew my fucking mind.

It’s important to note that internet music sharing services like Napster had just started, so aside from the radio and increasingly less, MTV, the only way to get exposed to new music was passing cassette tapes or CD’s amongst friends.

What’s more underground than that?

Music at its optimum level dictates or at the very least, reflects a culture.

Every time I hung out with these “heads,” hip hop songs and artists I had never heard before were being pumped in the tape deck of an ’89 Oldsmobile that served as the communal vehicle.

The music wasn’t being played because it was “cool” like what Puff Daddy was doing in marketing rap music, but because the music reflected the pace and events of life as it was happening.

Necro’s song “STD”, a narrative about an encounter Necro had with a female acquaintance, was in rotation at all times.

The production was stripped down and grimy, while the beats reflected the rolling drone of Necro’s New York roots.

Since ’99 (as of 2013 when I first published this), Necro has been featured as a rapper or producer on 16 different albums.

His 2007 album “Death Rap” featured appearances by Scott Ian of Anthrax, Dave Ellefson of Megadeth, and even Jamey Jasta of Hatebreed.

As a rapper, Necro has been featured with the likes of Wu-Tang’s U-God, DMC from Run-DMC, and his real-life brother Ill Bill from Non-Phixon and La Coka Nostra.

As a producer, aside from producing all of his own tracks, Necro has created tracks for Raekwon of the Wu-Tang Clan, Cage of Eminem battle rap fame, and most recently Kool G Rap, one of the most influential emcees in history and the original gangster rapper.

Necro’s latest project, The Godfathers, is a collaborative effort with Kool G Rap. “Once Upon A Crime.”

Speaking to Necro was a legit honor. And STILL is, you FUCKING slime bucket:

The first Necro song I ever heard was “STD”. Is that based on a real experience you had with a “nasty stinkbox?”

It’s fiction but it’s based off reality. I came across a lot of stinky bitches and it turned me off and I couldn’t relate to how any chick could smell, even that young getting pussy at 12, it was like “wtf?”

What was it like when you were pushing the “Necro EP” in ‘98? How many record execs, DJ’s, etc. were telling you that pushing it was a waste of time?

Necro: In 1998 my lawyer was the one that got Eminem his deal, and my own lawyer told me nobody is willing to sign white rappers, then he hooked up Em.

I felt disgusted, jealous & betrayed. I wasn’t allowed a chance by these industry people but they were all sucking Em’s dick, like there is only room for one white guy in hip hop.

It was very racial and demeaning, but obviously hip hop was in my heart and I decided to start my own label because I related to Master P and his hustle.

But it was whack man, that no one would give me a record deal; I got no love at all, even from lawyers I was paying.

Back then lawyers wanted to get their asses kissed and wanted to be like the artists, hanging out at the clubs. I didn’t get that shit, I was never taught to politic; I was about the art. I just didn’t have that manager that could play the fake game like Em had with Paul.

What made your album “The Sexorcist” come to be? Does it bother you that people can’t overlook the sex-drenched theme and appreciate what you did production wise?

The fact anyone would have issue with the topics is suspect because we wouldn’t be on earth if ya mom and dad didn’t fuck – it’s not a bad thing.

That’s why everyone does it; to make humans you must fuck, so should it be a chore? Or can it be awesome? So awesome sex is positive and I rap about that and I tap into the foulness of it all too.

Since it’s sensitive with disease and other sickness –I got no time for anyone that don’t salute my steeze.

I didn’t lose my $20k investment, but I didn’t make anything but my money back so it was a cool experience I suppose.

How did you and Kool G Rap hook up? In a lot of ways you guys have had similar careers, both rhyming about subjects a lot of emcees wouldn’t touch.

I reached out to G first on twitter. When we first met, KGR said something interesting to me regarding being respected for lyricism and being rich.

He said we chose being respected for lyricism first while most of the commercial rappers chose making money first. Although I have been trying to be a millionaire since 18, it made sense, because I have always followed my heart artistically and a lot of the times it didn’t help me financially because I was out for respect.

It was strange when you analyze that comment G made, because it’s real and makes you think about choices and what we really choose deep down to end up where we are in life.

While you’re making The Godfathers album, are you two writing together and planning out verses? What determines how you’re structuring the songs on this album?

We have discussed a lot of things regarding the project together, and on some beats we just do our thing and then present it.

We don’t live next door to each other, but we are in sync mentally on the vision. The concept has changed from being just gunnin’ to adding some Mafioso style tracks to it, but it’s not like a concept album where its one subject.

That’s Necro debuting 10 years after KGR, even though there is videos of me spitting on YouTube in ’92 and doing radio shows since ’94, I wasn’t ready for my debut til 2000 – and I see a lot of rappers that look up to me, they didn’t drop their debuts until 2010 – so its weird how every 10 years new blood comes in.

Combining Kool G Rap & Necro is a unique thing since he is the Godfather of all technical lyricism and gangster rap, and then me being influenced by G, I decided to create my own genre, Death Rap, to separate myself from everyone else, because I always wanted my own lane, and I am definitely the Godfather in that realm.

So that’s why the name worked because we are both Godfathers in what we do, but I can see how the name would evoke thoughts of the mafia.

So after avoiding that, we decided to rock a few joints with that style, but the majority is gunnin’ with some topics on criminality. It’s a very street record but with pure lyricism and east coast production like the era’s we loved.

Way back when Necro first started doing live shows, is there a time or bad experience that comes to mind where you thought about giving up because what you were doing was so different and innovative compared to anything else?

I would joke all the time that I am gonna quit just to hear whatever fans I had at the time go, “No, no, no don’t!” Or whoever was around me, they would say nah, you got something, keep doing it. Plus I love the music above all, it’s in my heart and soul.

I always view my career as past the point of no return, can’t go back now, I have come too far, so it’s either win or die! And I don’t plan to die yet, so winning is the only option for me.

All true winners have faced triumph and defeat and loss and obstacles in their life at some stage.

For more information on Necro, check out his Facebook page here. To order a copy of “Once Upon A Crime”, visit Necro’s website here.