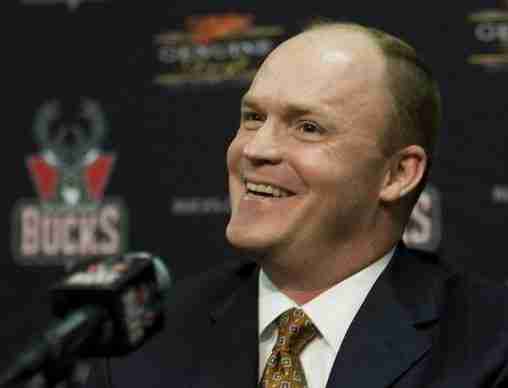 It’s over Scott Skiles; pack your dry erase board and move on with your life. Who will Milwaukee blame next when they continue to suck after this?

Ironically, nearly 20 years to the day he set the all time NBA single game assist record, easily his most notable achievement in the NBA, Skiles has been unceremoniously let go.

The real question is, how will Skiles manage to feed all of his children, allegedly as many as eight and as low as six? You’d be bald too, friend, if you had spread your seed like that. His penchant for “assists” extended off the basketball court, to generating life.

As a man who has also reproduced once (with one woman) I have no idea how Skiles can afford it, even with a full-time job. But apparently, Skiles “hated his team” and didn’t want the job anymore.

Skiles has had a unique coaching career, “assisting” in rebuilding different franchises and then “passing” them off to the next coach, who inevitably had more hair and less kids.

He took over a Bulls team that won 23 games the previous year and led them to 47, 41 and 49 wins and three straight playoff appearances and was rewarded by being fired after a 9-16 start to the ensuing season. In Phoenix before that, he inherited a solid squad from Danny Ainge and led them to 40 wins (in 62 games), then 51 wins othe next year over a full season, and two playoff appearances. He was then fired in year three after a 25-26 start.

Skiles got hired in Milwaukee in 2008 and led them to 34 wins after just 26 the previous season. The following year turned out to be his peak in the home of Laverne and Shirley, as the Bucks won 46 games and made the playoffs for the first time in four years. It was downhill from there and culminated with him leaving the team yesterday.

The Bucks are currently 16-16. It seems like the Bucks have been parked at .500 for at least 20 years, and history proves this. In the last 21 seasons, the Bucks have finished over .500 five times.

But now, they suck, and no one remembers that they used to be perennially good, and their logo used to be a harmless looking, happy reindeer-like Buck spinning a basketball on its finger/hoof.

Now, it just looks like a souless, empty-eyed reindeer that’s aimlessly wandering around with no direction, which coincidentally is how I would describe Lindsay Lohan. Like Lohan, the Bucks have no identity and no direction.

Anyway, Scott Skiles is out. And the Bucks suck.

Why Can’t Kurt Rambis Get An NBA Head Coaching Job?