What is Rumble Kong League?

Launching with a set of unique 10.000 ERC-721 tokens, called Kongs. Alongside a truly unique look, each Kong comes with a randomly generated set of attributes that can influence their performance in a match, providing additional depth and strategic elements.

Why am I so bullish on Rumble Kong League aka RKL?

1. The Rumble Kong League Community is Second to NONE

As an owner of 24 total NFTs across 8 collections, this is the most engaged and friendly group I am in. The most popular platforms for communities to engage one and other are Discord and Twitter. At literally ANY moment in time, you can jump into the RKL Discord chat and find someone as stoked as you are about the project.

Whether it is the General chat about all things KONG, or the Clubs channel for people looking for a team to join, everyone is welcoming and ALWAYS up! Rumble Kong holders are a true worldwide audience, just like the game of basketball.

Which explains why these current NBA players/execs are also owners of various Rumble Kongs:

Steph Curry – The greatest basketball player in the world owns 6 KONGS. He excited the community by sporting an RKL beanie in a recent postgame press conference. 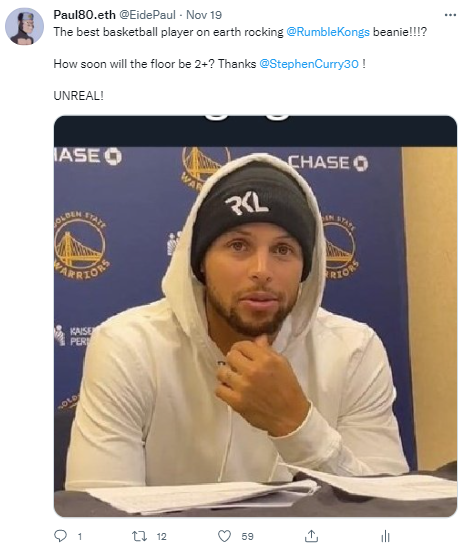 Andre Iguodola – Dre just bought one this week and shared it to his IG Story: 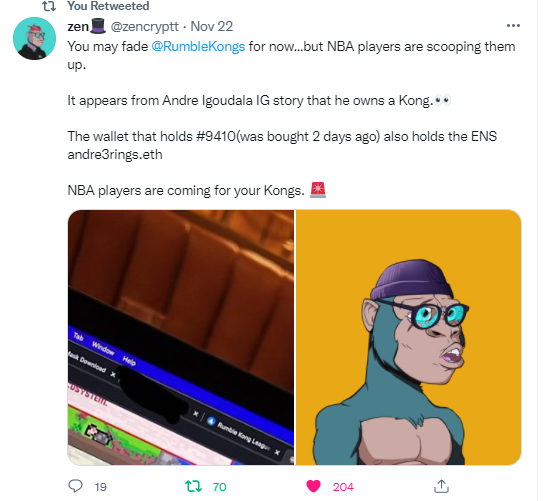 Daryl Morey – The evil genius himself. If Mr. Analytics owns one, you probably should too. 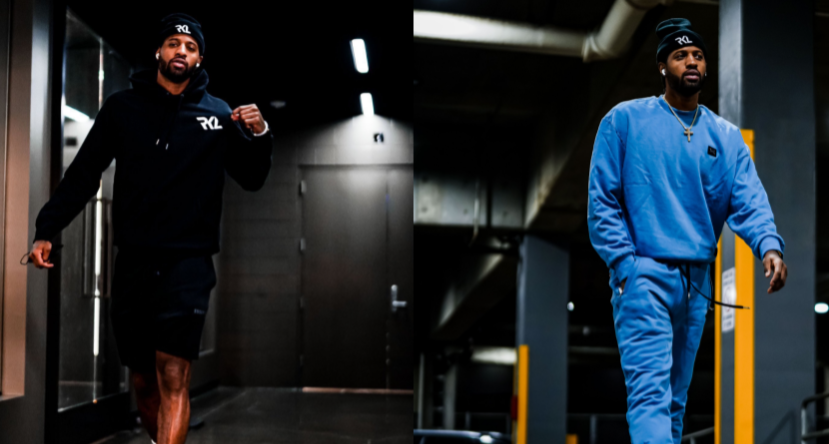 2) The Long-Term Vision of the Developers

From the Rumble Kong League white paper aka “Kong Paper”:

“We are combining various popular features from the blockchain, and gaming industry, such as collectibles, social avatars, algorithmic gameplay, play-to-earn functionality, and highly brandable content. Rumble Kong League is taking these features, combining them with their own vision, and thus creating a next-generation sport-based universe of playable NFTs, backed by digital value.”

Each Kong has rarity traits like all NFTs. But even cooler is that each Kong has in-game boosts based on four categories – Defense, Vision, Shooting, and Finishing – all on a 100 point scale. 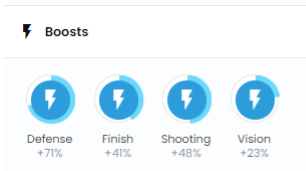 Rumble Kong League: A competitive 3v3 basketball game where each NFT avatar is a player on the court.

Beyond “just” the game and NFTs, the dev team is also developing an NFT marketplace to compete with Opensea and others. The team is building a completely self-sufficient infrastructure. And other NFT collections can play in games as well – details forthcoming.

Here are the screenshots of the games we have so far, developed by noted video game developer iLogos Game Studios (external development partner of Supercell, EA, Ubisoft, Disney, and more). 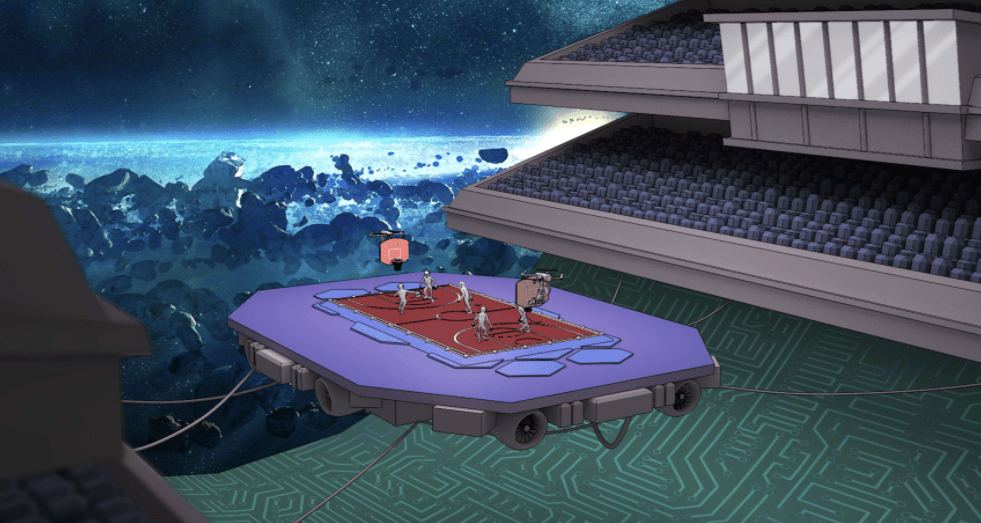 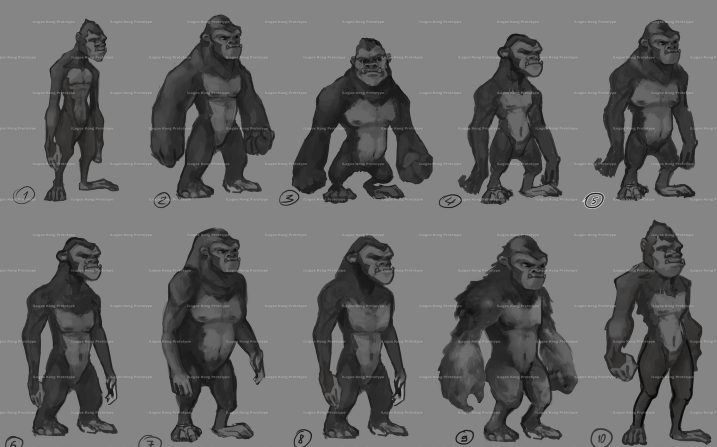 Few extra snaps of our kongs hitting the court to take you into the weekend. 🏀📸

Thanks again to this amazing community, your support with the project is truly appreciated.🤝

Who’s hyped for that club drop 👀
Sound off below 🔥⬇️ pic.twitter.com/Os4bL2iKmA

Ok, so it’s a really cool basketball game, a merger of esports and NFTs. But what’s the point?

(RELATED – What Is Opensea And How Does It Work With Metamask?)

Fun, strategy, money, and basketball – what else are you living for?

Step one – Buy a KONG via Opensea here
Step two – Buy enough to make a team/club (I own 4)
Step three – Buy a Club NFT (yet to be released)
Step four – Join other RKL lovers and make a Club in advance via Discord or Twitter. (link to current Clubs here)
Step five – Once the game is launched, play other clubs, make money, increase value of Kongs

Each club will be it’s own organization that can sell branding, build a fanbase, drive revenue independent of the game.

Your club is one club associated with Rumble Kong League. Like the REAL LIFE National Basketball Association! The teams/clubs comprise the league, while the NBA/RKL regulates it.

When launched, your club will be able to compete in pick-up games, leagues, and tournaments.

The future of this game/NFT project is limitless. This is why it is the best NFT basketball game, and possibly best sports NFT, in the entire metaverse.

Remember buying an NFT is not spending your crypto, but rather STORING your crypto in a crypto-leveraged asset.

Imagine if your stock in Amazon or Facebook had an individualized playable component that you could watch play basketball against other stocks.

In addition to garnering value dictated by the market/supply and demand of the limited run of 10,000 Kongs (the average Kong owner owns 2.9), your success leads to more revenue in a myriad of ways.

I am so BULLISH on RKL, my mom bought 2 this week! We now have TWO full squads!

The amazing part is that Rumble Kong League is barely 3 months old.

The Discord channel has just under 40,000 members (link here).

Imagine where we will be in a YEAR. Visit the RKL official website here. And watch out for scammers!!

I bought another Kong and the dopest pair of kicks in the RKL UNIVERSE.

Look at this beautiful baby: 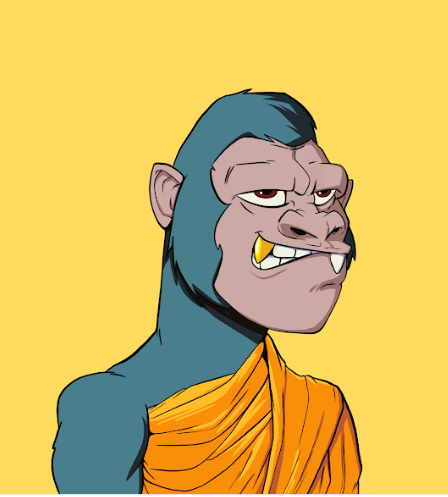 And these gorgeous Rumble Kong League sneakers, best looking shoe in the metaverse: 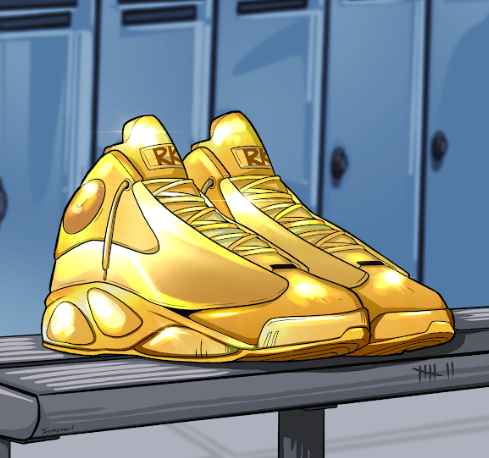 Hit me up on Twitter to nerd out and talk NFTs, basketball, or KONGS!