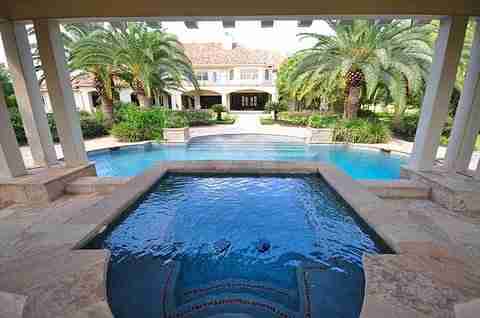 For just over a cool two million, you can pretend to be a 6-10, 16-year NBA vet named Robert Horry.

Robert Horry had a strange career for a guy with a well-earned rep to make huge shots.

He averaged double figures only three times in 16 years and retired with career averages of 7.0 ppg, 4.8 rpg.

But the only stat that really matters is championships and he won a total of seven, the most of any player who didn’t play for the Celtics teams of the 1960’s. He is also the second player in NBA history to win a title with three different teams, the other being John “The Spider” Salley.

Second is Kareem (who owns almost every conceivable NBA record). Horry also holds the NBA playoff record for most three pointers made with 53, 11 more than Michael Jordan in second.

Horry was also incredibly versatile (which goes along way explaining his longevity) as he was the first player to ever have 100 steals, 100 blocks and 100 threes in the same season.

Here is a quick glimpse at some of his “clutchness”:

How different would Horry’s career have been if a proposed trade in 1994 that sent him and Matt Bullard to Detroit in exchange for Sean Elliot would’ve actually gone through? In all likelihood he would’ve been just another front-court player and we as fans would’ve missed out on some truly legendary playoff moments of the last decade plus.

Another funny stat is that from 1993-94 to 2002-03 either he or veteran guard Steve Kerr were on the roster of an NBA Finals team and both won every time. In a 14 year period, he and Kerr combined to win 12 championships.

– May 22, 1993, Western Conference Semifinals, Game 7, Houston Rockets at Seattle SuperSonics. With the score tied at 91 late in the fourth quarter and the shot clock winding down, the rookie Horry took a pass from teammate Hakeem Olajuwon and knocked down a midrange jumper to give the Rockets a two-point lead with 32.7 seconds remaining in regulation. However, Horry’s heroics were not enough to secure the victory for the Rockets, who succumbed to the Sonics 100–103 in overtime.

– June 10, 2001, NBA Finals, Game 3, Los Angeles Lakers at Philadelphia 76ers. With the series tied at 1, the Sixers were down 89–88 with under a minute left after a three-point play by Kevin Ollie. Brian Shaw found Horry wide open in the corner; he then hit a three-pointer with 47.1 seconds left to give the Lakers a 92–88 lead. Horry, who had been a 44% free throw shooter in the playoffs to that point, also made 4 free throws in the final minute to seal a 96–91 victory. The Sixers never recovered.

– April 28, 2002, Western Conference First Round, Game 3, Los Angeles Lakers at Portland Trail Blazers. Down 91–89 with 10.2 seconds left, Kobe Bryant drove on Ruben Patterson and kicked it out to Horry, who hit the game-winning 3 with 2.1 seconds left.

– May 26, 2002, Western Conference Finals, Game 4, Sacramento Kings at Los Angeles Lakers. The Kings led 99–97 with 11.8 seconds left. After Kobe Bryant attempted a game-tying shot and missed, Shaquille O’Neal attempted a putback. When that missed, Vlade Divac knocked the ball away to try to run out the clock. However, it went right to Horry, who hit the game-winning three-pointer at the buzzer to give the Lakers a 100–99 victory and tie the series at 2 going back to Sacramento for Game 5. L.A. eventually beat the Kings in 7 and went on to win their third straight NBA championship.

– June 19, 2005, NBA Finals, Game 5, San Antonio Spurs at Detroit Pistons. Horry inbounded to Manu Ginóbili, who was cornered by two Pistons defenders. Ginóbili passed it back to Horry on the left wing, who then hit a three-pointer with 5.9 seconds left to give the Spurs a 96–95 victory and a 3–2 series lead heading into Game 6. Horry scored 21 points in the fourth quarter and OT combined to carry the Spurs.

– April 30, 2007, Western Conference First Round, Game 4, San Antonio Spurs at Denver Nuggets. With the Spurs up 90–89 with 35 seconds left, Tony Parker drove into the paint drawing his defender and Horry’s defender Marcus Camby away. Parker then passed to an open Horry on the right wing, who hit the three-pointer to give the Spurs a 93–89 advantage. The Spurs won 96–89.

In terms of his playing career, is Robert Horry the most clutch shot maker in NBA history? Who is better?

The Biggest Trades In NBA History