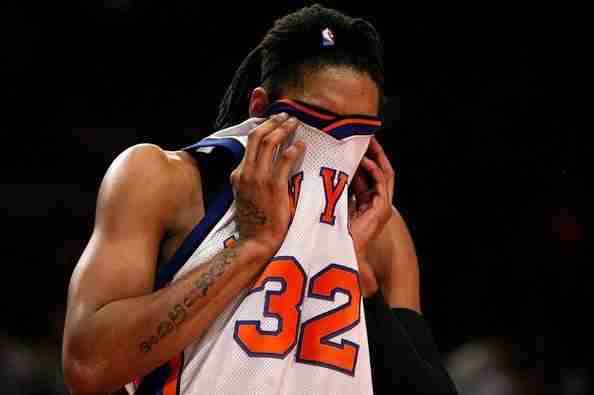 (Note: I originally published this on 3/29/11. In some faraway land, Balkman is still swindling a basketball loving audience.)

Even Bill Wennington had a jump shot. Paul Mokeski could at least rebound. Mark Eaton could block shots. Renaldo Balkman isn’t good at any of the previously mentioned skills.

The only time he plays is when the team he happens to be on at the moment is down by 20 in the fourth. He is absolute garbage and I won’t even listen to anything to the contrary.

The Renaldo Balkman’s of the world are why the owners are going to force a lockout next season; last year he made $2,112,417 to play seven minutes a game and score 1.1 ppg.

Thanks for showing up, Renaldo!

He’s so bad I heard he tells people on the street he’s actually Chris Wilcox. But no one believes him because he doesn’t know how to make a cursive “W” when signing autographs. If you’re pretending to be Chris Wilcox to mask your real identity, s#!t is ROUGH.

The only reason he is even in the NBA is because Isiah Thomas is a lunatic and the drafting of Balkman with the 20th pick of the 2006 NBA Draft is just another layer of his lunacy. To show you how bad a selection this was, the NBA’s Draft Guide that year, which featured 300 players, didn’t include Balkman.

Thomas, trying not to look stupid, claimed the Suns were going to draft Balkman if he didn’t, a claim the Suns flatly denied. Uhhh, yeah Isaiah. And you didn’t touch that Knicks employee’s breast either, right?

To hear Renaldo Balkman described as an “energy player” as Thomas did after drafting him in the vein of Dennis Rodman or Ron Artest is an absolute steaming pile.

Rodman and Artest’s non-stop motors are what defined them on the court, while Balkman doesn’t even know you have to hold down the clutch to start the car, then to get it into first gear.

The thing that really bothers me about Balkman is that in the seven or so minutes he actually plays in a game, he just mopes around with no energy or enthusiasm whatsoever, as if we’re all so fortunate to get to watch him saunter up and down the court, half-assed.

And that’s why he has been a “throw in” player in the two Knicks to Denver, then back to New York trades he’s been involved in.

Making a claim that can’t be statistically verified is a good way to give credit where it isn’t due, like everyone in the pro Balkman camp saying he, “Makes plays that aren’t quantified in the box score”. No, he really doesn’t. He really does nothing and is paid handsomely.
For nothing.

Looking at Balkman, you want him to be good, you think he would be, but he isn’t; so let’s stop making BS reasons and just admit it.

At least with Jud Buechler, like any good white stiff, you knew he was going to come in and knock down a wide open shot or two.

If you’re going to be a white stiff, at least work hard.

– NBA Players By College – What College Has The Most NBA Players?
– Vlade Divac Flop and the Wussification of the NBA
– Latrell Sprewell Chokes PJ Carlesimo – Where Are They Now?
– Jordan Flu Game vs. Isiah Thomas Ankle Game (Video)