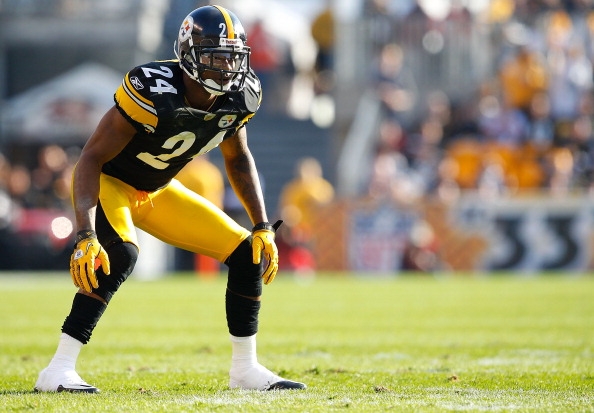 If anyone on the Steelers roster had a more tumultuous year than quarterback Ben Roethlisberger, it was fourth-year cornerback Ike Taylor.

Taylor’s 2006 started out great with a Super Bowl victory over the Seahawks in February and got even better when he signed a four year contract extension worth $22.5 million dollars in September.

But after the Steelers struggled to a 4-6 record to start the season ‘07 Taylor was benched by then head coach Bill Cowher in week 11 and didn’t start again until week 17.

Recently I spoke with Taylor about his demotion, the hiring of new head coach Mike Tomlin and the team’s victory in Super Bowl XL.

Have you spoken to Mike Tomlin since he’s been hired? Did he indicate his plans for you next season?

“Coach Tomlin and I have spoken several times since he was hired. He said with me the sky is the limit, and he wants me to come out and be an elite corner in the NFL. He’s already shown me some drills that are so simple, but so effective. And I’ve just been putting those types of things into my workouts and I can already see a difference.”

During his time in Tampa Bay coach Tomlin helped turn Ronde Barber into one of the best cornerbacks in NFL history. Do you see yourself filling that same role and becoming a Ronde Barber type of player for the Steelers?

“Time will tell, but hopefully yes. Really, it just comes down to me maximizing my talent. I have all the tools that you need as a cornerback: speed, strength, experience. But it’s just about getting it done. Coach Tomlin thinks I’m talented and I think I’m talented, so it’s just about getting in the film room, really locking down, looking at tape, studying your opponent, and then playing football just like we’ve done since we were small.”

“We’ll mix it up. We’ve got a new coach but we still got coach Lebeau, our defensive coordinator. He (Lebeau) is a guru who is well known for disguising blitzes and whatnot so it should work in our favor. He likes to mix it up so I know between him and Tomlin they’re talking about how to use all of our personnel and with all the talent we should be able to use aspects of both. “

Can you describe how it felt to go from winning the Super Bowl in ’05, to finishing 8-8 and failing to meet expectations in ‘06?

“We could do no wrong in the Super Bowl season. Everything was going right for us. Every play, every bounce of the ball, every call was going are way, but then the tide turned last year. Every thing that went our way the year before went against us last year. It was just like the exact opposite of the year before.”

Did getting benched last season leave a sour taste in your mouth?

“It definitely hurt a lot at the time, but that was last year. We’ve got a new coach, a new season to think about, so the stuff in the past is behind me. I keep it professional because you’ve got to expect anything. All I can do is work hard and play like I’ve shown that I can.”

Despite having both a top ten offense and a top ten defense, the team struggled to just an 8-8 finish. What was the main culprit for the .500 record?

We see defending championship teams in all the major sports typically struggle the following year. Is it hard to get motivated for the next year following a championship season? Did that have anything to do with the team failing to meet expectations?

“No at all. You’ve got to stay motivated because every year they tappin’ into some new talent, looking for the bigger, faster, stronger ‘Ike’, so you’re always motivated because we’re professionals and this is a job. With what happened last year, more that anything it was just being inconsistent. The ball just didn’t bounce our way. I mean to really win the games that we won (in ’05), you’ve gotta get some calls or have the ball bounce your way in a few crucial spots and last year that just wasn’t happenin’.

What’s the feeling going into this offseason compared to last year?

“It’s a new leaf. It’s kind of hard because for 15 years Cowher was here and you knew what to expect, but that’s the nature of the game. It’s a business and that stuff happens. We’re all excited, we’ve got a new coach who seems like he’s hungry and we’ve got to ride his coat tails.”

How are you training this year compared to in years past?

“More focus on body control. Football is a fast game, and my speed is one of my strengths, but you need to learn how to do everything under control and make it easier for yourself.

Who is the most difficult wide receiver to cover that you’ve faced?

“There really isn’t just one. I look at every receiver I face as a challenge because every receiver from the top to the bottom is different. Each one brings a different challenge to the field. On any given Sunday you can get beat by any one of these guys because they’re all so talented. So, I don’t look at it like ‘this one’s better than the other’. I treat them like they’re all the same because you never know.”

What’s one thing that the average NFL fan doesn’t know about the NFL?

“It’s a 9 to 5 job. You gotta be there at seven, eight o’clock in the morning and leave the facilities at four, four-thirty. You work hard all week and hope it works out on game day. It looks good on Sundays, but the work that goes into it during the week…we’re putting in the same amount of work as y’all do going to work. There is so much work behind the scenes that goes into what happens on Sunday that unless you’re a part of it, you have no idea.”

What was your feeling on the field the split second after you won the Super Bowl?

“Man, I’m a Super Bowl champion. You can’t even really talk about it. You have to go through that experience to know what it’s like. You got guys plain 10-12 years who never get the opportunity to go there. For me it came in my 4th year and it was a great experience at a young age. Its kind of hard to explain, but just seeing that click with four zeros in the fourth quarter, the whole world is watching…, now that is a great feeling. “

1 thought on “Q and A with Steelers Cornerback Ike Taylor”