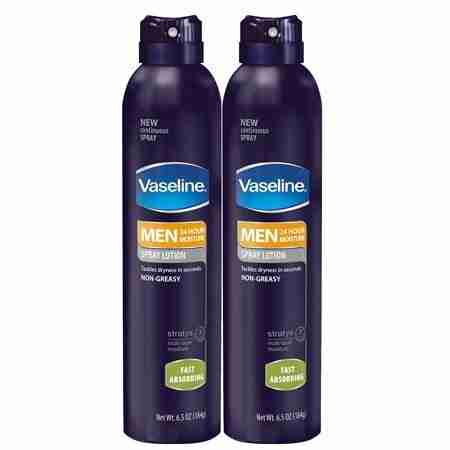 The new Vaseline Men Spray Lotion came to me in a time of need. My skin was drier than the driest Norm McDonald joke. So dry, in fact, that had my friends known, my new name would’ve been “Ashley” rather than Paul because I was so ashy.

Spray-on lotion may sound like a gimmick, but it’s actually really useful for certain troublesome areas. For me, one such area is the top middle of my back.

I’ve gotten used to glopping an excessive amount of lotion on my hand and sort of waywardly slapping it back there, usually with mixed results.

But the continuous “spray-ability” of Vaseline Men Spray Lotion allowed me to zero in on an area I couldn’t have otherwise reached. No, not that area, sir. I can reach there just fine, thank you.

The continuous spray feature, which is akin (or should I say “a skin” #ZING) in functionality to Old Spice Refresh Body Spray, means that not only are areas covered, but they are covered evenly.

Vaseline Men Spray Lotion absorbed into my skin faster than any lotion I have ever used. And there wasn’t a slimy residue that made my clothes stick to the area I covered; at least not from the spray lotion, anyway.

Also, there was no perfume-laden aroma or scent to assault your nostrils. There was a hint of something, a certain “Je ne sais quoi,” but it was masculine and invigorating. It certainly didn’t smell like Vaseline. Or, sex covered in Vaseline.

Speaking of sex, Vaseline Men Spray Lotion came to be thanks to the union of three special elements:

1) The container that Vaseline Men Spray Lotion comes in has this cool thing called a “twist-lock actuator” that essentially allows the spray apparatus to either be engaged or disengaged to prevent spills.

2) The internal structure of the container utilizes “bag-on-valve technology.” #ThatsHOT

3) Vaseline Men Spray Lotion uses the perfect balance of “humectants” and “occlusives” to make sure the lotion isn’t sticky and effectively moisturizes.

So, leave your Brand X cocoa butter from Wal-Mart on the shelf and keep the safety engaged on your “spray apparatus.”

10 Best Lines to Pick Up Chicks On Vacation