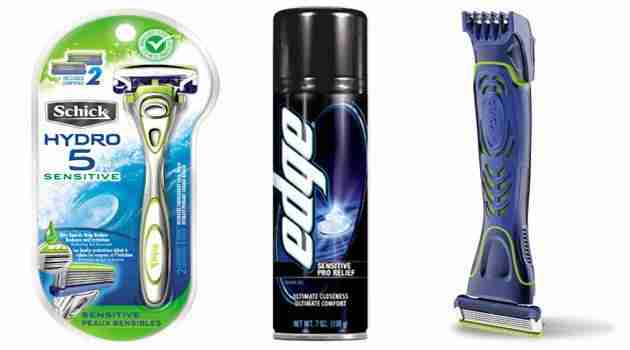 The Schick Hydro 5 Sensitive Collection had all the sensitivity of a toddler petting a kitten on a pillow with a rainbow in the background, while listening to Richard Marx’s hit power ballad, “Hold Onto the Nights.”

As a dude, shaving your chin is a delicate, sensitive process. I can’t tell you how many times I’ve nicked myself in that particular area based solely on excessive speed and a lack of tenderness.

Luckily, the Schick Hydro 5 Sensitive is here to save us from ourselves. The Ultra Glide Blades are equipped with Skin Guards (that would be a sweet band name) that smooth the surface of the skin while you shave. In the 20-plus shaves I used the product, it didn’t happen once. And I sped through my shaves like a young Apollo Ohno.

Since we’re being sensitive, I have a confession to make. Thanks to investing in high priced, high-end shaving creams (not to be confused with the Tribe Called Quest classic, “The Low End Theory”) over the years, I’ve tended to look upon Edge products with a jaundiced eye.

I mean, look at the people Edge hangs out with — Wal-Mart, Target and almost any other national retail chain. Edge will pretty much align itself with anyone that will have it, and those whoreish tendencies have never been lost on me.

But, as with the case of many whores, there is also something that attracts you in the first place, no matter how many strange beds she’s laid in.

Thanks to this review, Edge and I reconvened, and after a few go-arounds with the Sensitive Pro Relief Shave Gel, I have to say that it was pleasurable.

The combination of Edge Sensitive Pro Relief Shave Gel with the Schick Hydro 5 Sensitive was the most formidable pairing of sensitive elements since K-Ci & Jo-Jo teamed up for their 1997 #1 hit, “All My Life.””

Speaking of K-Ci, he exposed himself at a concert in 2001 and was charged with lewd conduct. The New Schick Hydro 5 Groomer exposes itself too, but it’s a good kind of exposure.

The Hydro 5 Groomer, as well as the Schick Hydro 5 Sensitive razor, features a flip trimmer that “exposes” all five blades, which allows you to reach tight spaces with ease. Ahem.

So, who’s ready for a cigarette? Grab my pack of Winstons from off the bureau while I set the mood with the Color Me Badd classic, “I Wanna Sex You Up.”

The Hydro 5 Groomer is half-razor, half-power trimmer, which makes it the Centaur of shaving. It has the classic “man part” elements that you expect of a razor on top (five blades, aloe gel reservoir) mixed with the horse legs (the edger and flip trimmer) on the bottom.

Unless you’re afraid to get a little bit sensitive, check out the Schick Hydro 5 Groomer and Schick Hydro 5 Sensitive at schickhydro.com and Edge Sensitive Pro Relief Shave Gel at edgeshave.com.

“Watch” How You Accessorize