In the last 30+ years, there hasn’t been a heavyweight boxer as good as Mike Tyson.

Arguably the greatest heavyweight of all-time, the 5-10 Tyson, with just a 71-inch reach, routinely knocked out opponents that were five inches taller and a quarter of his own bodyweight heavier.

After his 38-second knockout win over Lou Savarese in 2000, Tyson uttered potentially the greatest quote in boxing history. “My style is impetuous, my defense is impregnable, and I’m just ferocious.”

And it wasn’t just about his success in the ring.

The brand of Mike Tyson has experienced the crossover appeal that no other boxer, outside of only George Foreman and Muhammad Ali, can lay claim to.

If you grew up in the ’80s or early ’90s, you spent hours engaging the likes of Soda Popinski and Mr. Sandman in the Nintendo sports video game “Mike Tyson’s Punch-Out.”

At his peak, “Kid Dynamite” was one of the most popular athletes in the world and still is to this day, thanks to his one-man show, “The Undisputed Truth.”

Even several years after his final official bout, Tyson’s legacy as a fighter and as a brand are both as impregnable as ever.

Roots of Fight pays tribute to the rich history of martial arts, boxing and MMA, and connects the history with images of iconic fighters like Mike Tyson, Muhammad Ali, Helio Gracie and Bruce Lee in its clothing collection.

And we aren’t talking Affliction, Silver Star or any other weird fighting apparel that gives a nod to the strip mall jiu-jitsu black belt ethos that permeates the modern fight landscape.

Roots of Fight is all substance, no flash and dash. If Affliction is for the twenty-somethings who still haven’t learned humility is where it’s at, Roots of Fight is the quiet man whose presence alone controls the room. 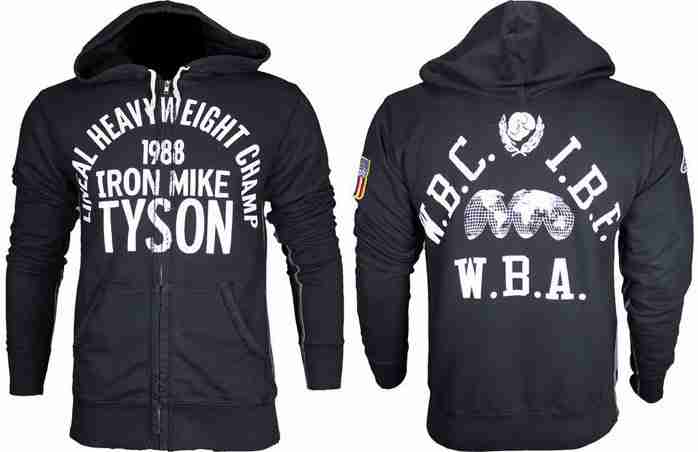 The hoodie from Roots of Fight celebrates Tyson’s greatest achievement inside the ring; becoming the only heavyweight in history to unify all the titles.

In 1988, Tyson became the lineal heavyweight champion by holding the titles of the three major organizations: the WBC, IBF and WBA.

The Tyson ’88 special edition hoodie features sleeve badges inspired by details from the trunks Tyson wore the night he knocked out Michael Spinks to become the lineal champ.

The super soft throwback is a mix of cotton, polyester and rayon that feels unlike any other hoodie I own.

When you wear it, not only will you not want to take it off, but you will steer clear of precarious environments (i.e. bars, the gym, anywhere outside your house) that could damage your Tyson ‘88 hoodie.

But Roots of Fight didn’t just stop with a #badass hoodie. There is a whole collection featuring “Iron Mike”.

My personal favorite outside of the hoodie is the Iron Mike Photo T, where a 20-year-old Tyson gleams with pride as he poses with all three world championship belts.

The Tyson ‘88 hoodie feels as cool as it looks and lets everyone know you are a true old schooler who respects boxing history and the career of the greatest heavyweight of all-time. It’s a great gift idea for the fight fan on your Christmas list.

Check out all the Roots of Fight gear by following this link.