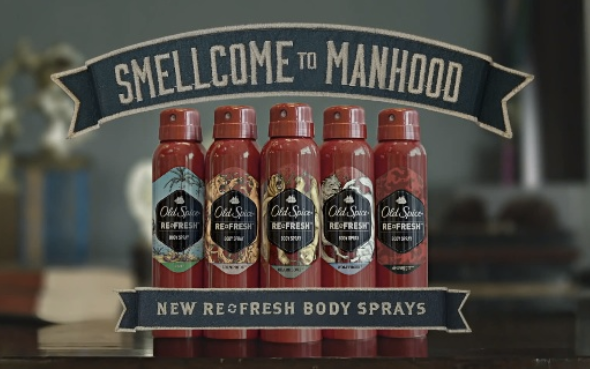 Ever since I saw the first Old Spice “Mom Song” video, I have been praying to my non-denominational Spray God every night, asking (begging) that one of the smell technicians at Old Spice reach out to me for a product review of their new Re-Fresh Body Spray. In the meantime, I used an old bottle of Fiji shower gel to feel like I was part of the movement, to show I was “down,” i.e. the way gang members have to “do dirt” to be accepted into a particular gang or sect. And it paid off.

Old Spice reached out, but just like in gang life, they wanted something from me.  Even though I killed that drifter (needlessly, as it turned out) to peg my “real-a-meter” into the red, what they really needed from me was to recruit more members who cover their members in body spray. After all, 67% of guys who use body spray aren’t using it correctly.

I blame AXE for the cavalier spray techniques that have been developed, because after those ads, you thought the only way to apply body spray was via Spray Cloud. I seriously didn’t think “too much” existed in the body spray vernacular.

If AXE isn’t to blame, perhaps it is the lesser known GED equivalent, Bod and the famous song/tagline conveyed via sex drenched female voice, “Hot bod/I want your bod.” And who could forget that dude’s ripped abdominals?

Whoever you want to blame, it doesn’t change the fact that an Overspraying Epidemic exists thanks to the lack of proper training regarding spray techniques and men’s body sprays.

FACT: 68% of young guys reveal that no one has taught them how to spray properly.

FACT: 55% of young guys apply body spray to their clothes.

We truly are the products of our Spray Environments, and the kind of men we “spray into” is either because of or in-spite of the products we are exposed to by our moms, and more hopefully, other man’s moms.

So what is Old Spice doing about this? Re-introducing you to your manhood for the first time, like that crush you had on your cousin at the family reunion in the early ’90s. Except this time, there will be no guilt or unwanted pregnancy, and you will be doing it correctly. (Rachel, if you’re reading this, I miss you.)

Re-Fresh features a patented cyclic molecule with an empty core that absorbs fragrance as the body spray dries on the skin. “Observe that, Newton.”

“Swagger” could easily have been renamed “New School Pimp” scent. It was fresh and young, yet esteemed and established. It was highly educated, but you can tell via a knowing glance that it always keeps its pimp hand frosty, with a subtle yet fully viewable “Make your move, sir” glean in its eye.

The Fiji scent of Old Spice Re-Fresh Body Spray was a welcome addition, like a revered half-brother, and didn’t shame its native family of products in the Old Spice Fresh Collection, which I spoke to Minnesota Vikings receiver Greg Jennings about previously, (click here for a “Re-fresh”) and Super Bowl bound Denver Broncos wide receiver Wes Welker earlier this season.

Frankly, Fiji was fresh, fruity and ready to fight funk. It’s a hip scent that’s “with it” and invasive, in an endearing yet “single on Valentine’s Day desperate to hook up” forceful type of way.

There are three different Re-Fresh collections to choose from: Wild Collection, Fresh Collection and Red Zone Collectio, including new scents “Bearglove” and “Lionpride.”