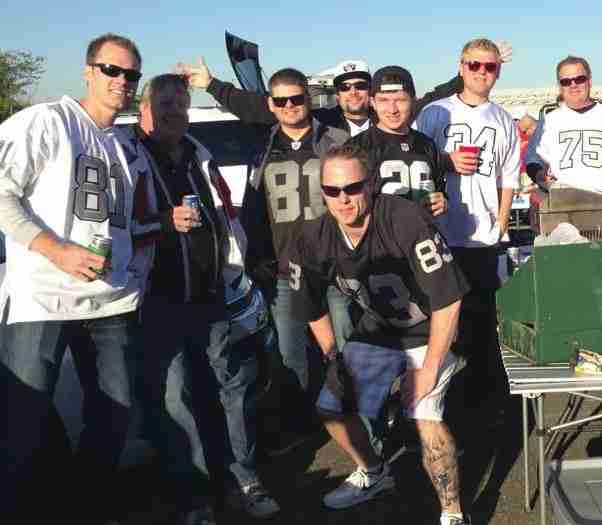 As I stood in Arrowhead Stadium — section 125, row 33 — rocking the #83 jersey of Raiders legend Ted Hendricks, the last thing on my mind was the shave I enjoyed that morning courtesy of a razor from 800razors.com.

There I was, getting my sexuality questioned by endless Chiefs fans, in front of endless Chiefs fans in an assault befitting of Kansas City’s league leading defense. But one thing that wasn’t getting questioned was the closeness of the shave delivered via the five-blade men’s razor from 800razors.com.

Just like the Raiders, 800razors.com is anti-establishment. If the razor game were the AFC West, 800razors.com would be gunning for opposing pretty boy quarterbacks in Denver and San Diego. Sorry KC, outside of Joe Montana, you’ve never had one. From the company’s site:

“Gillette — the monopoly-like gorilla of the razor industry — burns people with their outrageous prices, while the internet razor guys with the funny video burn people by importing crappy razors from Asia and screwing Americans out of jobs. 800razors.com ensures people get the best razor for the best shave at the best price or it will provide a full refund via its Burn-Free Guarantee — no skin burn, wallet burn, or American job-loss burn.”

The concept is simple. You go to 800razors.com and select the razor of your choice (three blades or five) and the number of cartridges you want. You can place a one-time order, or sign up for a new delivery every two, three or four months.

Every new customer gets a free handle. And it isn’t some plastic, POS handle from God knows where; it’s made of metal, like Motorhead. It’s solid, like the one your dad would use.

And the insane amount of rubber grip on each one could well be from an abandoned tire. A tire that had to grow up rough, hard and on the streets, not knowing where its next meal would come from. A tire that probably grew up like this one:

Not only are the razors from 800razors.com cheap, but they are high quality and delivered directly to that double-wide you call “home,” Chiefs fan.

On that day in Kansas City, Chiefs fans had a lot to say, but I made it through, untouched and unscathed. Probably because of the reputation Raiders fans have earned for being armed with knives. Like this guy:

I wasn’t packing a blade, but if I were, it would’ve been a blade from 800razors.com.

When you look good, you feel good, and what feels better than a crisp black Raiders jersey, capped off with a clean close shave? As the kids say, “Hater gonna hate.”

Now, I have two favorite teams; whoever is playing the Chiefs and the team at 800razors.com.