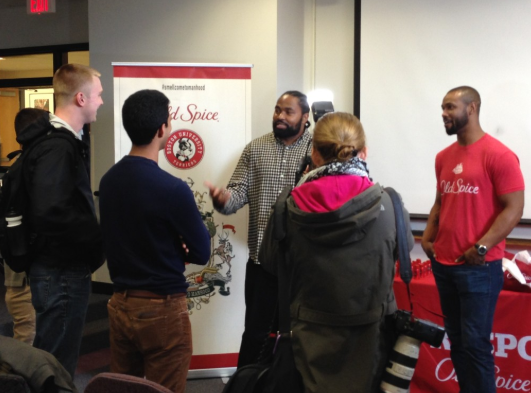 There’s a war going on that you may not even know about. We hear a lot about world events like missing Malaysian Airlines flight 370, Syria and the Middle East. But one thing we don’t hear about is the overspraying epidemic that exists for 75% of guys.

Patriots All-Pro linebacker Jerod Mayo and Old Spice have teamed up to teach men how to scent responsibly and stop this epidemic the way Mayo stopped Ravens tight end Dennis Pitta in the 2013 AFC Championship.

“I’m actually on my way now to educate young guys at Boston University to teach them how to scent responsibly,” said Mayo, concern evident in his voice.

“They know how to drive responsibly, and do other things responsibly. It’s all about scenting responsibly in 2014. I’m very excited to help end the overspraying epidemic that’s happening now.”

One reason the problem has reached epidemic levels is ignorance; 68% of guys admit that no one had ever showed them how to apply body spray properly.

The first step is acceptance; realizing that you have an overspraying problem and then taking the necessary steps to move forward.

Mayo, Captain of the Patriots defense, is here to call out your defensive spray audible.

“There’s some rules you have to abide by. First off it starts with a shower; you have to take a shower with your Old Spice gel. That helps gets the pores open so you can put on the Old Spice Refresh Body Spray. But the thing about refresh is that you don’t need too much of it.”

When he isn’t spending his time helping the youth, tackling odor, Mayo can be found grooming his beard. Old Spice Refresh Body Spray will not only make you a better man, but a better overall groomsman.

Does a mean face wig aid him when he’s blasting opposing running backs or fullbacks when they try to power through a gap?

“Ha, we call it getting “Blammed,” said Mayo as he laughed and discussed getting blasted by an opposing player. “If I get blammed on a play, I want to go back in, find the player and try again. I guess that’s what makes us football players. We’re not gonna get blammed and that’s the end of it, nah. You go back and you try it again until you get them.”

Does the way he smells thanks to Old Spice have anything to do with the way Patriots defense is able to plug in cast-off players other teams have given up on and make them key components?

“The coaches do an excellent job of getting everyone in the right place to make plays. Guys from other teams come over they enjoy it, we work hard but at the end of the day it’s all about wins and losses.”

“It’s all about mental toughness. No matter what the outside world is saying it’s all about going to work every day and chipping at the rock, We’re not going to win a championship today, but you can work towards winning the championship each and every day. And that accumulation of hard work equals wins. And that’s the mindset here.”

And that’s Old Spice’s mindset as well; if you keep chipping away at your pathetic spray attempts with non-Old Spice products, someday, you can be a scent world champion, perhaps even with the help of Old Spice’s Champion Scent.

“Scent can be a strong personal motivator for a lot of guys in 2014. It can lead to a lot of good things. If you overspray before you go into a job interview, you are not going to get that job. Old Spice Refresh Body Spray is an aphrodisiac for jobs. Spray it up, but not too much.”