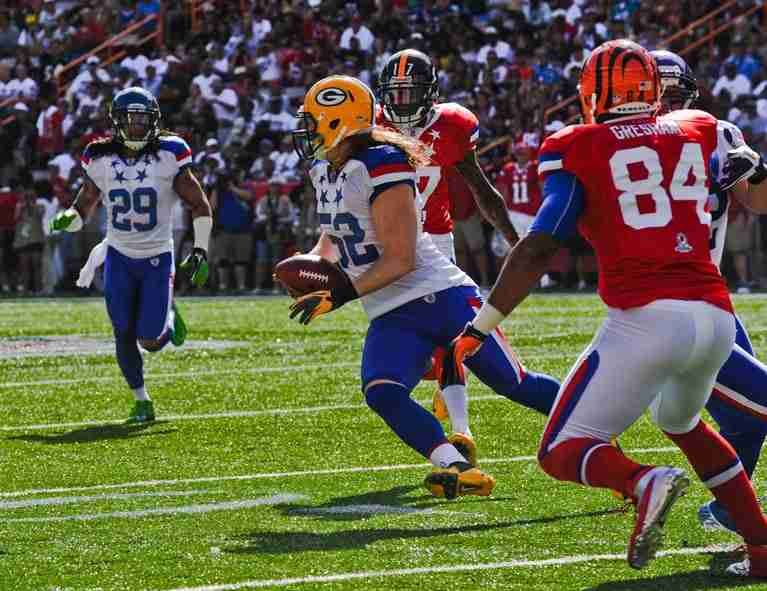 Clay Matthews could definitely steal my girlfriend and probably yours too, bud. Upon scheduling this interview, my girlfriend did a quick Google search to put a face with the name.

As images of “The Clay Maker” flipped across her iPhone, she said, “Wow. This guy is a complete stud.” The accompanying far away look in her eyes told me all I needed to know; that if given the chance, she would shed me the way Matthews sheds opposing double teams.

Aside from getting the ladies flustered off the field, Clay Matthews has established himself as arguably the best pass rusher in the Packers history.

I talked with Clay about his career, his lineage and the Campbell’s Chunky “Sacks for Soup” campaign.

Talk about the partnership with Campbell’s Chunky Soup.

Clay Matthews: For the past year I teamed up with Campbell’s Chunky and created the “Sacks for Soup” campaign. For every sack that I was able to get last year, Campbell’s Chunky donated 2,000 cans of soup; 1,000 to a local Green Bay food bank and another 1,000 to the opposing team’s city. To date, we’ve donated over 40,000 cans of Chunky soup. For every sack, they also donated $1,000, so we were able to get around up to $20,000 for my foundation (CM3 Charitable Fund), so it’s been a fantastic campaign; one that not only provides for myself, but gives back in the process of doing so.

Clay Matthews: My favorite kind thanks to the Green Bay weather and obviously a play on the Packers is the Hearty Cheeseburger. They’re all fantastic, so it’s hard to choose, but just like on the commercial, I like the Clam Chowder and the Spicy Quesadilla as well. They’re all really good, so I have to say all three.

I thought they’d make you a special kind called “Bear Chunks” for the way you’ve annihilated Chicago Bears quarterbacks in your career.

Clay Matthews: I’m willing to try! I don’t know if it would be a big seller, but I’d be all for it.

Speaking of the Bears, do you get more amped to play a team like that in Chicago compared to other games, or at this point in your career, are you excited regardless of the opponent?

Clay Matthews: It’s just exciting to go out there each and every week. But any time you play a division rival, especially the Bears, there’s always a little extra magnitude put on the game. It’s not so much for playing against those players, but it’s the direct result of playoff implications and the fan involvement, especially playing in Chicago because of the hatred they have for the Packers but the respect they have for the rivalry, so it makes it that much more fun.

I write about men’s grooming and I’d be remiss if I didn’t ask you about your great hair. What is the key to having such great hair? Are you lathering it with Campbell’s Chunky? It IS full of vitamins.

Clay Matthews: I could be wrong, but I think if I did that I’d have the exact opposite effect. It’s funny, I decided to grow it out in college and I never thought it would get the amount of exposure it does today. But it’s one of those things. I don’t think the fans will allow me to cut my hair, so for the time being, I’m just going to roll with it.

Who wins an arm wrestling contest between you, your dad (former NFL linebacker Clay Matthews) and your uncle (Hall of Famer Bruce Matthews) right now, and does “Old Man Strength” enter into the equation at all?

Clay Matthews: I was about to say, because of old man strength, I don’t know if I’m there quite yet. They would come up with the excuse that they are too tired if they lose. A lot of people would love to see that, and also what our family Thanksgiving dinner football game would be like too. There’s always a lot of thought-provoking ideas when it comes to the legacy of my family.

How much has your lineage affected the player you’ve become? You’ve got the DNA of these badass old-schoolers. You just had to become a kickass outside linebacker; it’s as simple as that, right?

Clay Matthews: Well, that’s definitely what I thought I was going to grow up and do. I grew up thinking I would be the next great linebacker to follow in my father’s footsteps, and fortunately, it worked out that way. I’m fortunate in having come from where I’m at, but at the same time, it’s a lot of work. I definitely think growing up in my household helped my transition. Having my dad, my uncle and even my grandfather, who played in the NFL, helped me understand the business, that it’s a results-driven business, and that’s part of why I’ve had the success I’ve had so far today.

Talk about your Super Bowl experience in XLV versus the Steelers. Your forced fumble on Rashard Mendenhall changed the game and is for a lot of fans your signature play, similar to Jerome Bettis running over Brian Urlacher on a snowy Pittsburgh day. Do you feel that way about it?

Clay Matthews: It happened at the right time, especially on the first play of the fourth quarter with the Steelers driving to take the lead. I was fortunate enough to have led the play in which we come up with the fumble recovery, and then we were able to score and the rest is history. So it’s one of the plays I look back on and am happy it happened in such a big game. And it was great to put in so much work to know that was the play they were going to run. So, yeah, it was a key play, but I’m not going to sit here and think about it too much, especially while I continue to play. Maybe in the future when I’m retired and I look back, I’ll appreciate it more, but for the time being, I’m always trying to figure out the next play, trying to get back to that game.

What’s the coolest thing about being Clay Matthews, besides your hair, because that would be too easy? And is there something stressful or challenging about being a public figure, also in that same vein?

Clay Matthews: Well, like you said, it’s cool to go into every game and represent yourself accordingly. It’s not difficult to do, but at the same time, with the cameras and people pulling you every which way, you have to manage it. It’s one of those things where you sign up for this lifestyle to put yourself out there, so you try to represent yourself the best way possible. For me, it’s no different, and I like to think I’m a good role model to not only my peers but kids who look up to me that potentially want to play football one day, or whatever life brings them.  For me, just conduct myself like a professional in all regards.

When your career is over, what do you want to be known for?