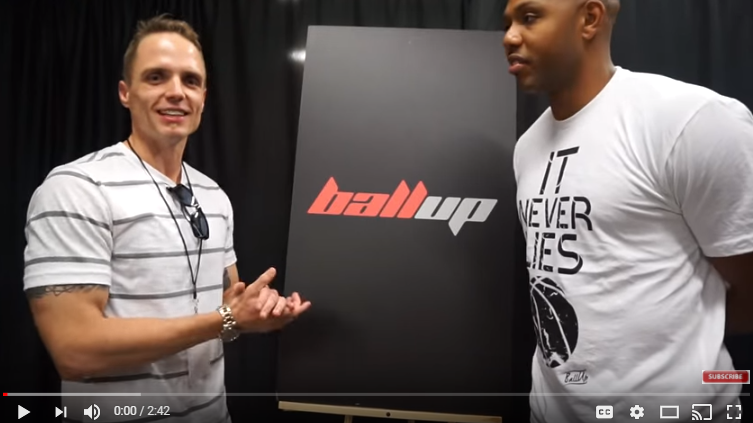 Streetball gets a bad wrap. After being exposed to the And1 Mixtape Tour, and occasional Rucker Park Tournament highlight, it’s easy to envision four guys standing around while one guy dribbles, each possession punctuated by a slam dunk with little or no defense.

But the Ball Up “Search for the Next” is completely different from its predecessors. It’s a 10-city tour looking for the best undiscovered player in the country that culminates in $100,000 and a roster spot for the tour’s winner.

In 2003, the most popular streetball player in the world right now, The Professor, was one of them.

While attending an And1 Mixtape Tour stop in Portland, Oregon in 2003, the 5’10,” 155-pound 19-year-old Professor competed in an open run competition prior to that evening’s game and did well enough to get invited back that evening to square off against Team And1.

After a solid performance in the game, he joined the team full-time and was suddenly getting paid to play basketball, literally overnight.

“Yeah, true story. We would’ve been fully content just watching the game,” said Professor about the experience. “I got there early and saw that there was an open run going on and that there was a chance. I hopped in as soon as I could and showed them what I could do.

“And next thing I know, I’m selected to play against the And1 Mixtape Tour team. I got the crowd excited again a few times in that game, and then that night, they asked me to go on tour with them, and I was just shocked.”

Ball Up started in 2009 and took the concept of touring streetball to a new level.

“The whole experience has been a blessing. I’ve been able to travel the world, got to call basketball my job thanks to the company giving me my first contract in 2003. So I just feel really blessed to be in this position and that Ball Up wanted to start this movement up again.”

The Professor is humble, but let’s not forget how sick he is.

Here’s that move, in a single frame: 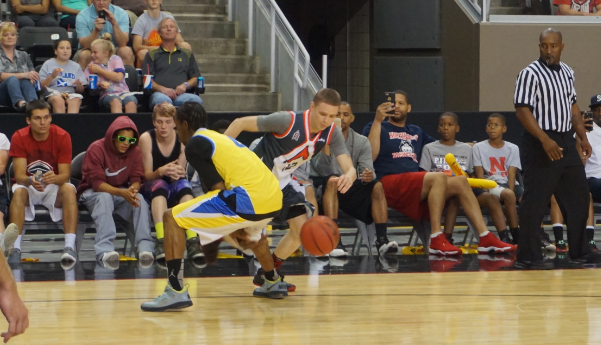 In every city on the tour, a team of local talent, assembled earlier in the day at an open run, faces off against the Ball Up All-Stars, including streetball legends The Professor, Bone Collector, AO, Sik Wit It and Air Up There.

The team is coached by former NBA world champion and 12-year vet Tracy Murray – which warrants special mention, because as a teenage basketball junkie in the 90s, I used to love watching him stroke the three-ball from deep.

So when I saw him leaning against a wall in the lower level of Ralston Arena, I had to tell him that. And, have my daughter take a pic. 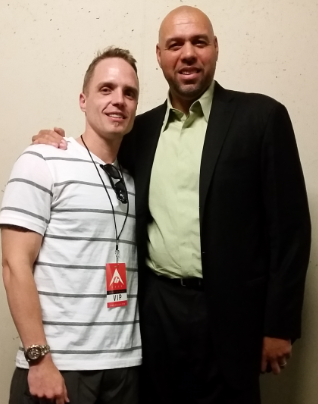 This isn’t the Harlem Globetrotters playing the Washington Generals every game, every city, over a period of years, replete with hi-jinks and “laffs.”

It’s a literal competition, pitting the hungriest ballers against the Ball Up All-Stars in front of their families and hometown crowd.

As far as making the team, at a Ball Up event, you get to watch the drama unfold, as it did for the former Grayson Boucher, aka The Professor, with two players from the local team (as the full squad stands in the middle of court in front of the entire crowd) selected to move forward in the competition at the conclusion of the game.

It’s high level basketball and a reality show right in front of your eyes.

Below, Ball Up CEO Demetrius Spencer, The Professor and the New Orleans Pelicans’ Eric Gordon determine who will move forward, while two participants anxiously await their fate.

Two MVPs from each city are then invited to participate in a 20-person, two-day combine camp at the end of the tour. 10 finalists are selected from that to play against the Ball Up All-Stars in a championship game taking place in Ball Up’s hometown of Los Angeles.

The MVP of that game earns a spot on the Ball Up roster and a professional contract worth $100,000. Each stop on the tour features an NBA guest coach.

“I have a good relationship with Ball Up,” said Eric Gordon, the NBA guest coach for the Omaha tour stop.

“It’s just been fun. I enjoy the game and so do they. You just gather a bunch of guys out here in Omaha and try to beat the Ball Up team. Mostly, it’s all about having fun and enjoying the game.”

Nobody captures the energy and excitement of a Ball Up event like Sik Wit It, streetball icon and ball handler extraordinaire.

Just like The Professor, Sik Wit It attended a tryout for the And1 tour that ultimately changed his life.

Watch him in this interview and tell me you don’t love the guy:

Each tour event is filmed and later broadcast as part of the “Ball Up: Search For The Next” TV series on Fox Sports. Here are the remaining dates: