Old Spice Guy Isaiah Mustafa is more than a pretty face with a a tightly toned torso and a voice like butter. At one point, he was actually a real dude — just like you.

After running track in high school, Mustafa decided to try football and ultimately walked-on at Arizona State University as a wide receiver.

He played in the 1997 Rose Bowl and caught passes from quarterback Jake “The Snake” Plummer.

Post graduation in 1997, Mustafa played on the practice squads for the Tennessee Oilers, Oakland Raiders, Cleveland Browns, Seattle Seahawks and even played a season in NFL Europe for the Barcelona Dragons.

After football and prior to landing the “Old Spice Guy” gig, Mustafa owned and operated a restaurant in L.A., won $47,000 on game show The Weakest Link, and landed acting roles for shows on NBC, ABC, USA Network and The CW.

I spoke to Isaiah just prior to the kickoff of Old Spice’s year-long partnership with Tough Mudder at Glen Helen Raceway in San Bernardino, where he and thousands of athletes took on a grueling 10+ mile obstacle course.

As a matter of fact, I hung out with Isaiah several times, from Cincinnati where we ran a Tough Mudder together to LA at the ESPY Awards, and the dude is legit as cool as he is in the ads. Totally chill and unassuming, I can confirm he is a fun guy to be around! 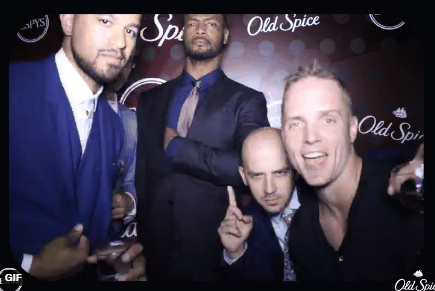 Isaiah Mustafa on his workout routine:

“I workout every day and each day I do a specific muscle. I like to lift weights whenever I can, but if I can’t do that I have a workout system devised by Ross Dickerson who I follow on Instagram. It’s some plyometrics, but really a mix of a lot of things. I also play ice hockey five nights a week, so that is where I get my cardio.

Isaiah Mustafa on his diet:

“I am a big proponent of intermittent fasting, which Terry Crews got me into. I don’t eat anything in the morning, other than a pot of Bulletproof Coffee, until three o’clock. From three o’clock in the afternoon until 11 o’clock in the evening, I eat all of my food for the day. I usually eat a lot of grains, vegetables and fruit, and fish.”

Isaiah Mustafa on his smoother than velvet vocal styling:

“I wanted it to be a mix of James Brolin, Billy Dee Williams, Adam West and Ron Burgundy. So far, I think I’m pulling it off.”

Isaiah Mustafa on The Hardest Working Collection and his relationship with Bob Giovanni:

“Bob Giovanni and I have a great relationship. A working relationship that is. You know, as in the The Hardest Working Collection. See what I did there?”

Isaiah Mustafa on being the Old Spice Guy: