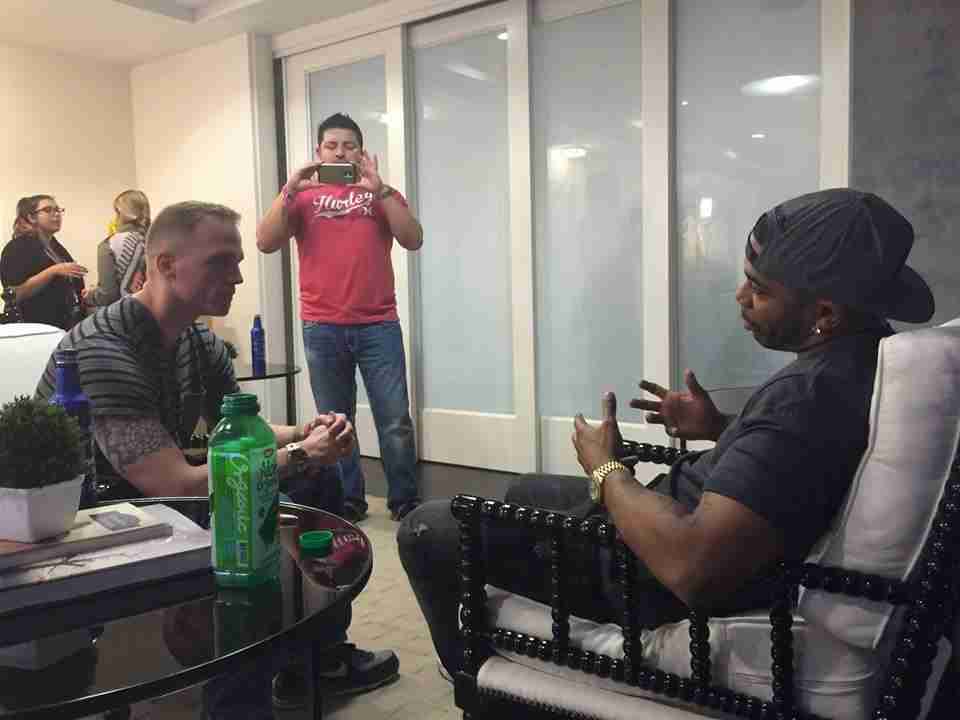 I interviewed Nelly at the Super Bowl in Phoenix, AZ about his career, the (endless) rise of Taylor Swift, and how he does his best work on the toilet, while some light jazz played in the background.

Here are a few highlights.

On “E.I.” and the line, “Get a room in Trump Tower just to hit for three hours/kick the bitch up out the room ’cause she used the word ‘Ours'”:

“It came from real life. It was cool. But you’re talking about lines that were said in 2002. I was a young, thriving Nelly. Hopefully, when you get in this game, you build your own type of fan base and actually have fans that appreciate what you do and grow with you. It’s funny, because it’s a double-edged sword. You hear so many people say, ‘I wish you would do another album like Country Grammar.’ And I say, ‘You were in school when Country Grammar came out, right. You can’t get that feeling back. The reason Country Grammar meant something to you is because you were in school at that time. It was the buddies that were around you, the moment for you. It was your theme music to what you were going through in that life.’ You can’t make that. You don’t think Michael would love to make another Thriller? You think he wasn’t tryin‘? You can’t, because it was that moment. It was music that was unheard at that time. And you can never get all of those elements back again.”

“I don’t chase [past success]; I just make music. Music is creativity, it’s a career. You up, you down, you up, you down… You can’t have a career without an up and down. Nobody is consistently up. Well, probably Taylor Swift. Taylor Swift is probably the only one I see that is like, ‘Yo, she’s just gonna keep going (up), huh? Just gonna keep fuckin’ goin’.”

On when he’s the most creative:

“Songs pop up at the weirdest moments. You can be in a hotel, sittin’ in a room, being in a club, bein’ on the shitter. That’s my office. I can think, I’ve got the phone on the wall, set the laptop up on the dirty clothes hamper; I feel my freest.”

On what motivates him:

“I don’t do that anymore. When people are like, ‘Yo, what do you want to do?’ It’s not about that no more for me. Succeeding is not what drives you. I think what drives you is knowing where you don’t want to be – I know where I don’t want to be. That’s the motivation to keep going. Because as long as I keep going, I’m not gonna be there. Because to say what I want to do, I’ve accomplished so much and I’m steady going, I just don’t know, I just keep it movin’. But I know one thing that never changes; It’s where you don’t wanna be.”

On what makes Nelly, “Nelly”:

“It was everything. When you get counted out so many times, you look for a sense of, ‘Where am I going to channel and put this energy that I have to succeed?’ Some kids take it and take it the wrong way. Some kids work hard, they study, they go to school, they graduate and become something. Some kids do it through sports. But again, being a product of who you are, it can be a fuel. Sometimes, too much fuel can blow you up. But majority of that time, if you take that fuel and use it right, you can go to the moon.”

“You’re not content. If you’re content, you’ve already started the giving up process. This is a game of creativity, being competitive, it’s a ‘dog eat’ and I love it.”