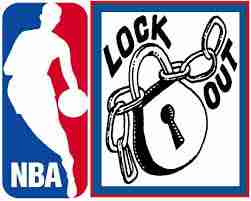 I’m standing right behind you like I have been all season. I know you are trying hard not to notice me, the NBA Lockout, but I’m not going anywhere.

Sure, it’s been pretty easy to forget about me for the time being because the league is doing well.

The Knicks are good again which suddenly revitalizes the NBA’s largest media market. Regular season games are getting their highest ratings since 2004. Blake Griffin is a freak and is proving a year away was worth the wait.

But no matter what happens during the season all the good feelings and temporary uptick in revenue go down the toilet once the end of June strikes and there is no CBA in place.

So temper your enthusiasm until then. Or just continue to ignore me as most people have.

From my perspective, it’s pretty obvious who is at fault here; the owners. They’re the ones who want me, “The NBA Lockout” to take all the blame and balance their books for them and to eradicate the flawed system that they created.

The players are fine with the system as it is. The owners want more money and since they are billionaires, can afford to lockout an entire season and outlast the players, who are “only” millionaires and would suffer the worst.

The entire situation breaks down to the owners trading the long run for the short term i.e. paying mid to low level talent huge contracts to get players to sign, over the last five years in particular.

The average NBA player makes $3.5 million dollars a year which is all guaranteed money. Most of the players in the league are not worth what the owners have agreed to pay them. Hence a possible Lockout.

For example, Eddy Curry and compare his salary to his production. Or Joe Johnson. Or Drew Gooden. Or several other players.

These contracts weren’t just bad, but caused league wide contract inflation that the owners can’t support long term, especially considering the contracts are guaranteed.
Now it isn’t the short term anymore, the long term is finally upon us.

The owners don’t want to ante up and pay what they agreed to. So instead of abiding by the terms and conditions they set in the first place they threaten a “NBA Lockout” or at the least “Contraction.”

Contraction means all the NBA teams losing money would be shut down and all that money would then be redirected to the financially successful franchises that remain.

The players see the lockout as a way the owners would strong arm them into agreeing to a less lucrative deal, as is contraction because contraction means less opportunity/money for the players, while offering more of both to the owners which is interesting because the owners lack of frugality is ultimately what created the necessity for this option in the first place.

The owners need a lockout because the financial system in place cannot be sustained.

“Basketball Related Income” or BRI is again at the center of this potential lockout as it was during 1999’s work stoppage.

BRI is the revenue each team makes from tickets, jersey sales, etc. that it has to share with the players. The owners of course want more money and the Player’s Association wants more for the players. The agreement right now (51% of BRI income for players and 49% for owners) is going to expire.

The players are not the ones wanting a lockout because they are happy with the BRI, the guaranteed contracts and the majority of the CBA that’s in place.

They stand to benefit directly from it without having to do much especially in terms of risk. The owners argue that the players gain all the benefits but don’t pay for any of the financial risks involved.

But, Players Association head Billy Hunter says the benefits are impossible to quantify thanks to the owners not being as transparent with its figures as the Player’s Association would like and as a result, they can’t tell how much money is on the table.

In response to David Stern’s assertion that the league lost $370 million dollars last season said Hunter, “There might not be any losses at all.”

“It depends on what accounting procedure is used. If you decide you don’t count interest and depreciation, you already lop off $250 of the $370 million dollars, and everything else was predicated upon what they were projecting, which was a decline in attendance that didn’t happen,” said Hunter. “Attendance was the second-highest ever.”

“We had the best Finals in years, Game 7 had the highest TV rating in 12 years, the ’09-10 BRI was the highest in NBA history, player salaries went down, and right now we’re experiencing an all-time high in season-ticket sales coupled with the fact that the interest being demonstrated by the public is unprecedented.”

This week the owners announced they were pulling out of a negotiation session with the Player’s Association during All Star weekend which begins on February 19th.

NBA All Star Weekend has long been a time for both sides to come together and discuss concerns or viewpoints, but the owners have again decided to take a hard line stance by pulling out of the meeting, seemingly growing more comfortable with the idea of a lockout and making sure it happens.

See you in June, NBA fan.