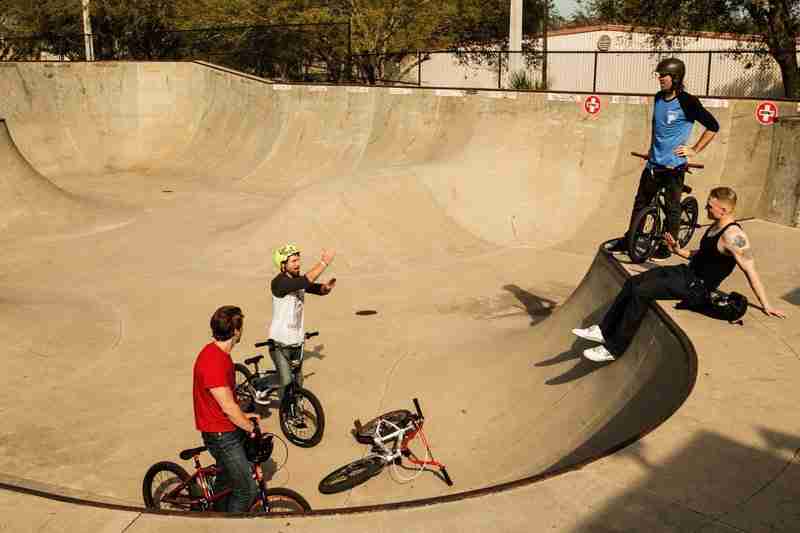 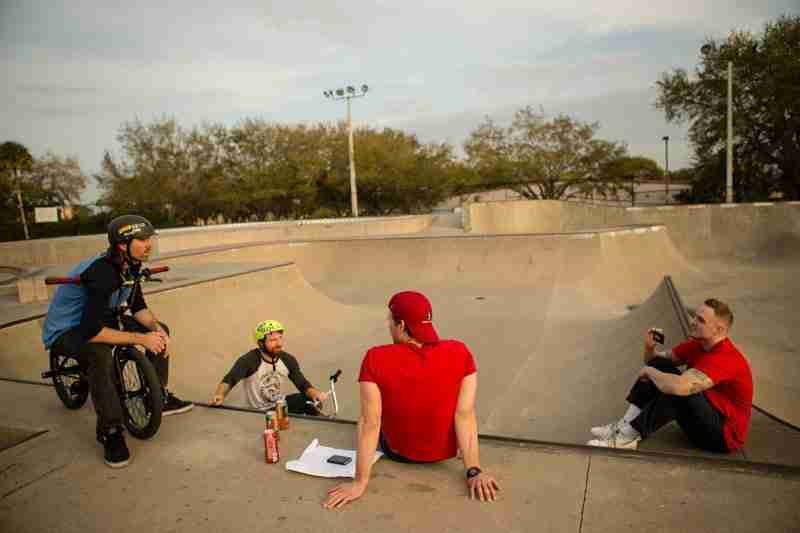 Why didn’t I get into this shit when I was 12? It would be pretty emasculating to hit up a local skate park, present day, and get crushed by some teenagers, and, to completely shatter my face doing a rudimentary move in front of some kids who love Wiz Khalifa, tiiight pants and jacking off, in that order. Worrying about your insurance deductible and the associated out of network costs never helped anyone’s BMX performance. But, I wouldn’t be the first person to seriously injure myself.

Getting to Orlando Skate Park/OSP (which is what you call it, Brojam) at roughly 7 AM was a serious thing of beauty. The sun had just began to rise, which gave everything a cherubic, surreal glow, and was accompanied by an endless chorus of early morning bird chirping action. It was like a bird mixtape that you made to impress a chick (when you used to do shit like that), except this was played against the backdrop of crisp morning air and the excitement of doing something you had never done before: Riding a BMX bike.

When I first attempted to straddle the BMX, my first concern was for my nutsac. I’m all vasectomied up, so I wasn’t worried about reproductive function being compromised (spray and pray, baby); I was literally worried about crushing my nutsac on the pointy plastic seat.

And with that, I mounted the bike from behind, and rode it, in a rather wobbly way for about 10-15 feet. The bike was really small, my legs felt super long, and the safety of my ballsac was still floating through my mind. Maybe it’s because when I was 13 and playing little league I watched a kid in the on-deck circle take a well hit, yet foul, line drive directly to the nuts which resulted in one of his balls deflating, right there on the field. What a sound!

I mean, I guess dudes can live with one nut a la Lance Armstrong and former Philadelphia Philly John Kruk, but is that really an optimal way of living? DeGroot picked up on my nervousness/total lack of overall coordination.

“When was the last time you rode a bike?”

The skate park was divided into two areas; what I like to call the “Double Diamond,” where pros like Chad, Mark and Rob Dolecki (Pro BMXer/photog for DigBMX.com who snapped some killer images you can see here) make incredibly difficult shit look incredibly easy, and the “Kiddie Pool,” where myself and my friend Zach Goldsztejn from Mountain Dew rode around to get a feel for our bikes.

Having never done this, going down even the slightest of declines is a nerve wracking experience. Even a simple move called a “Bunny Hop,” where you literally hop on your bike until both wheels come off the ground, is hard to do. But it’s been a long time since either DeGroot or Mulville had any difficulty doing a Bunny Hop.

DeGroot turned pro when he was 19. “The first trick I ever did was on a curb where you smash your front wheel in and your back wheel pops up, called an “Endo.” I didn’t have a brake and you just smash it into the curb. It felt like you did something aside from just riding in a straight line.”

Mulville also turned pro around that same age. “I just really loved to jump — jumping was always my thing. A lot of other kids wanted to race or whatever but it was just too competitive. I just liked jumping and would get kicked out from a young age for doing it.”

In BMX, there are two sorts of riders: “Flatlanders” and “Jumpers.” And if it sounds like two warring factions, in the BMX subculture, it really is. Flatlanders, like DeGroot, stay on the ground and do technical maneuvers involving their hands and feet and a ton of coordination. Jumpers, like Mulville, get huge air and perform tricks.

“My go to is a Superman,” said Mulville. “Where you jump out and extend your arms and legs off of the bike completely and soar.”

To get up to snuff on current BMX slang, I had Chad and Mark break it down for me:

But, as I would learn, that’s what’s cool about BMX — there’s room for any style and every rider brings their own flare and interpretation to a particular move, from the way they build their bike (the size and weight of the frame, tires, etc.) to riding with no brakes because the cords can “jam you up” when performing tricks.

“It’s paid the bills, flown me around the world many times,” said DeGroot. “I’ve got friends in every state, crazy sponsors. But yeah, that’s what I do.”

Both guys have met hella cool people as well, like Eminem, Russell Crowe and Juliette Lewis:

“All of Europe is crazy huge for BMX,” said Mulville about popularity overseas. “Kids are more excited there. You go to a random city in south of France and every kid knows more about you than you do. I’m going to Estonia next month and it’s the same thing. It’s crazy.”

“My record is 220 days on the road in a year,” said DeGroot about the most he’s ever traveled since turning pro. And the coolest place he’s ever been?

“Japan, no doubt. They pride themselves on service and making people happy. They truly, truly love what you do. You could take of your shoes and change your socks and they’d be like, ‘Wow he changed his socks, awesome.’ They love this stuff over there. No disrespect to other countries, but Japan was the one that really stands out.”

So after talking with the guys about the basics of “BMX Theory,” it was time to quit being such a wuss and carve some bowls! 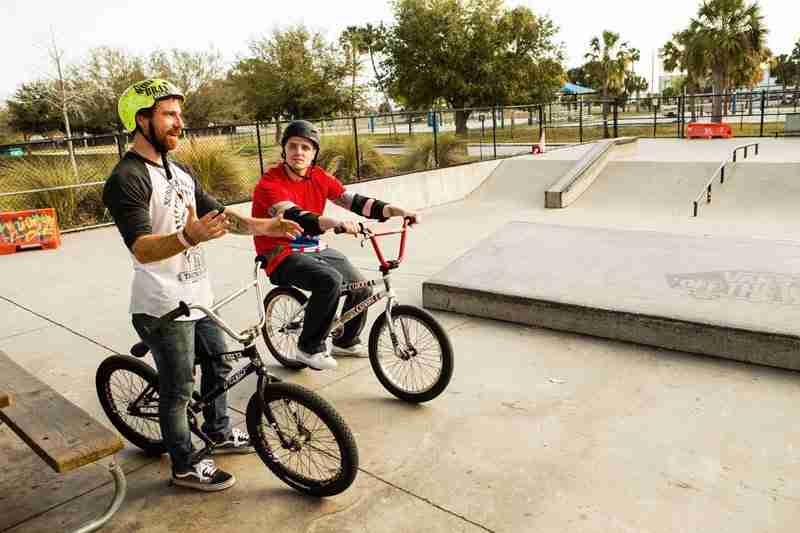 Initially, I was riding my brake pretty hard like a complete woman. So, I needed something to break the ice, to cut the tension, to get my juices flowing. I was able to procure a can of Mountain Dew Kickstart Orange and I sucked that thing down like Jesse Pinkman at an all-night meth party. It tasted like original Mountain Dew, but with an orange flavor similar to Sunkist or another popular orange soda.

Within minutes, I could feel the effects, and it immediately paid dividends in my BMX game, which you can see here, as Mark Mulville takes my “drop-in” virginity and was surprisingly gentle about it for a man with such rough, firm hands:

To put this adventure into perspective, I entered the Orlando Skate Park with the BMX wherewithal of the average nine-year-old in terms of understanding, the average 12-year-old in terms of athletic skills, all packed into a nearly 33-year-old frame of a man. Why didn’t I get into this shit when I was 12? It would be pretty emasculating to hit up a local skate park at age 32 and get crushed by some teenagers.

Once I got to the airport, I had some time to reflect on the previous two days. But as soon as I got started in the act of reflecting, a relatively hot chick sat down across the aisle from me… and pulled out a banana. 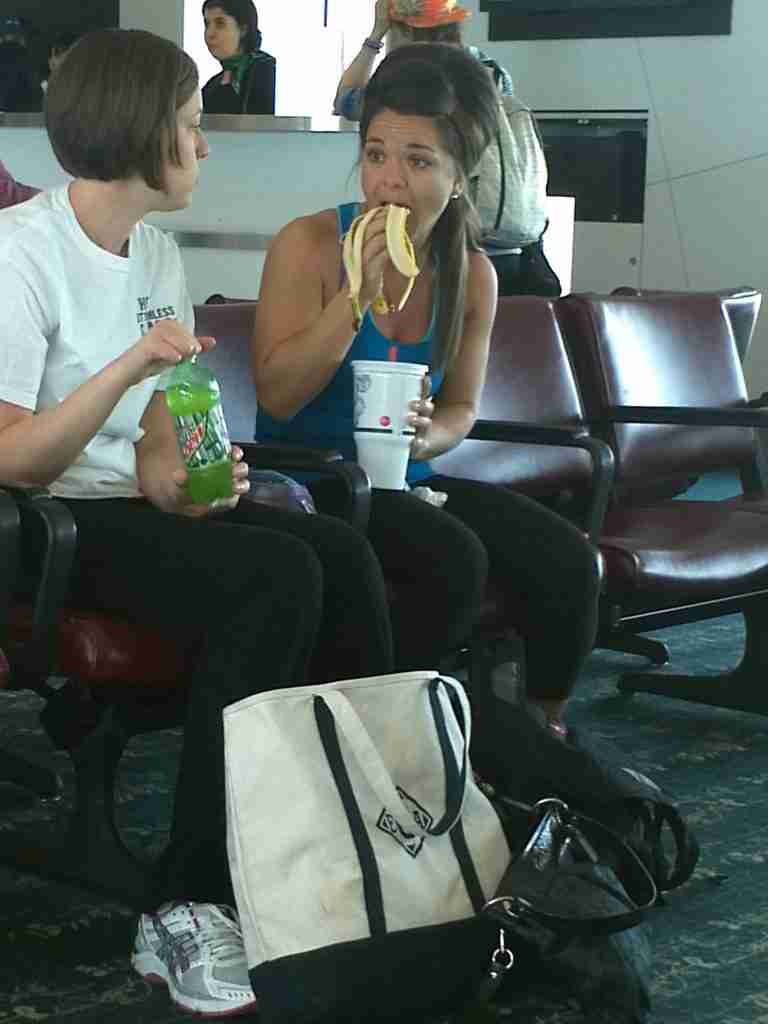 The next four minutes were pretty awesome. Wait, what was I saying again?

What made it even more awesome was the way her friend was simultaneously enjoying a Mountain Dew; unbeknownst to her, the only reason I was there was because of Mountain Dew. It really put the whole trip into perspective.