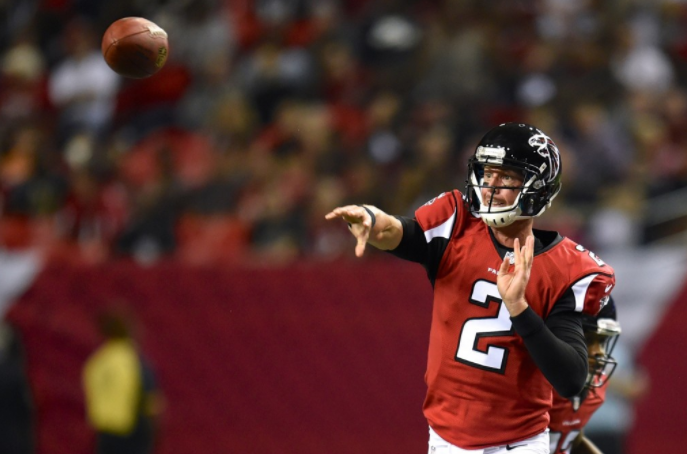 I asked Matt Ryan aka Matty Ice what it feels like to get chased around by a beast like Julius Peppers, his defining NFL moment, and if doing press at the Super Bowl without playing in the game (like he did last year) felt like going to prom without a date.

You have to go by positions – defensive line, linebackers, secondary and defensive backs. There’s so many good ones. I think of a guy early in my career that we went against a couple times every year in Carolina, Julius Peppers, around 2008. He was about as good as there is. Basically unblockable. In the secondary, early on in my career, seeing Ed Reed and the way he could go sideline to sideline, or Troy Polamalu. I remember I threw an interception against the Steelers my second or third year, and he just made an unbelievable play. Those three guys are three of the guys who jump in my head right off the bat.

It’s funny as a fan we don’t perceive it the same way you do; we don’t have a 6’7” freak like Julius Peppers trying to grab us and throw us on the ground! It doesn’t seem real when you’re watching it on TV.

He was a different guy. He looked different than everybody else, he was so big. We were scared to even try and throw a screen to a running back outside because his arms were so long; you were scared he was going to come down with the pick. Kind of like J.J. Watt is right now.

One thing that has struck me about watching you over the years is how composed you seem to be on the field and off the field.

I think as the quarterback, eyes are on you all the time. Your team, opposing teams, people are kind of looking at you all the time to see where you’re at. And I always feel like, if I’m the calming influence, or just straight-line, that guy doesn’t get too high, doesn’t get to low guys respond well to that. And that’s pretty much my personality.  That’s the way I am and I really think that helps at the quarterback position.

That’s actually something a friend wanted me to ask you; are you really as nice as you seem?

(Laughing) I’m sure there are some people who wouldn’t say that, right? “I don’t know about him, he’s been a jerk once or twice.” Yeah, this is just kind of who I am.

You’re on the verge of completing 9th season already. That’s insane, and means I’m getting older now too, Matt.

It’s crazy and it goes by really fast. To think now that I’m in year nine, going into the locker room I’m one of the veteran guys, not only in our locker room, but in our league. It’s a unique spot to be in. I also think I am a better player than I have ever been. I feel like I’m at my prime, in terms of physically, I can throw it, and run, and do all the physical things I want to do, better than I ever have. Then I also have a lot of experience, both good and bad, positive and negative. That’s going to bode well for me moving forward.

Because of the rules limiting the defensive secondary, how often are you willing to just fling it up there on a 3rd and 15? It seems like 60% of the time something good is going to happen.

I tell our wide receivers all the time that they have to trust me; I am not going to put them in a bad spot and hang them out to dry. We also have some pretty special guys. A guy like Julio Jones, if you put the ball anywhere around him, I think DBs are scared to go hit him because he’s such a big, physical guy. And that’s a huge advantage for us.

What’s the one play or general memory you have that really defines you, to yourself, as a football player in the NFL?

Some late game stuff. I think that’s one of those things I’ve done well, and we’ve done well throughout my career, is making plays late in games, to win games, and there’s a number of them. I think back to my rookie year where we hit a deep out route to Michael Jenkins against Chicago…

YES, I remember that vividly, I’m a Bears fan! How dare you sir!

We were able to kick a field goal and win!

Exactly. Stuff like that, that competitiveness, we’ve had a number of examples like that throughout my career and I think that has been really important.

We’re a month into the New Year. What New Year’s resolution did you make, and have you kept it?

Hahahahaha, hmmm. I’m not big on New Year’s resolutions. But I feel like every year it’s like, OK, I’m gonna really eat better this year and that’s already gone out the window, right?  When it’s a Friday night or Saturday night, you might get a little sloppy.

When is the last time you had a song stuck in your head and what was that song?

Ugh, man. I feel like that happens all the time, whether it’s a good song or not! I Can’t Feel My Face, that was stuck in my head on a flight, coming out here to San Francisco! I had heard it in the car on the way down to the airport and I couldn’t get it out of my head for the entire flight. It’s one of those things that just gets stuck, man. What was yours?

Exactly! I don’t want it stuck and I just want to get rid of it.

Last year for the Super Bowl you were out in San Francisco to do media. What’s it like to be out there and not play in the game? Is it like being at a dance without a girl, or what’s the deal?

Yeah, probably being at a dance without a girl is a little bit worse, right?  I mean, those are traumatic experiences when you’re young. The goal for everyone out here is to be playing in it, so from that stand point it is not as much fun as it could be. But at the same time, it was great to meet guys from around the league and meet some former players. It was a great opportunity to get to know some of the guys in a forum that’s a little bit more relaxed, so from that standpoint it was really fun.