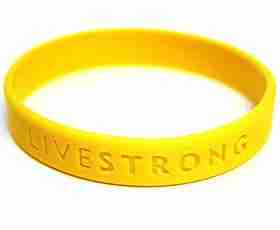 Did you know that Livestrong bracelets are mass produced by parent-less, orphaned, child laborers who sleep in cages, deep within the seedy underbelly of downtown Tokyo?

You didn’t see Lance Armstrong thanking them after his 6th Tour de France victory, did you? No! But, I bet you saw him pimp these godless items in the name of cancer prevention and treatment, didn’t you?

It has now become “cool” for everyone to wear them and if you don’t, then you’re not “sensitive about cancer” or “willing to donate to save lives,” like Carson Daly or Justin Timberlake are. The drug dealers in my neighborhood have even started wearing them now. That’s how played out they are.

I loved Livestrong bracelets in the 90’s when they were called “Zubaz”, kinda like how I  liked the red kabbalah string in the 90’s when it was called a “Friendship Bracelet.” (Or if  you were a Saved by the Bell Fan; “Buddy Bands.”)

Which reminds me; wasn’t Madonna cooler when she was deep throating a champagne bottle in “Justify My Love,” rather than telling everyone else how to live like she does now? It’s like Bill O’reilly messing with Ludacris for objectifying women, while he  objectified his own secretary with phone sex messages he left on her answering machine.

Wouldn’t it be creepy to get that message from a drunk, disheveled O’Reilly at 3 AM?

“You’ve just entered the no spin zone and I will forcibly enter your no spin zone! And my cock won’t take no for an answer!! See you at work on Monday. Oh, by the way, I’m gonna need you to take some dic-tations from me in the morning.”

The Livestrong Bracelet will sooner or later go the way of Debbie Gibson. One minute she’s a wholesome teenybopper remaking “Locomotion” and selling her perfume  “Electric Youth” and everyone loves her. A year or so later, when the bandwagon isn’t as  full, she changes her name to Deborah, puts on a flannel and tries her hand at grunge  music. That doesn’t work, so a few years later in a last ditch effort for public affection,  sans anything to lose, she poses for Playboy!

See you in Hell, Livestrong!

Do you know how they embed the word “Livestrong” in these plastic representations of man’s inner need to fit in? With teeth from the mouthes of the child laborers, that’s how! They use a modified version of Eli Whitney’s “Cotton Gin” that functions as a printing press but only with teeth from 5-9 year olds. Truly barbaric.

So, how do you feel about wearing one of these Shit-strong bracelets now, barbarian? Conflicted, I would assume.

Next time you see Sally Struthers raising funds for homeless orphans, just remember what their other career choices are, aside from bracelet production, if you don’t help; Michael Jackson’s nude “Garden Attendant” or a living ashtray for the Japanese Mafia.