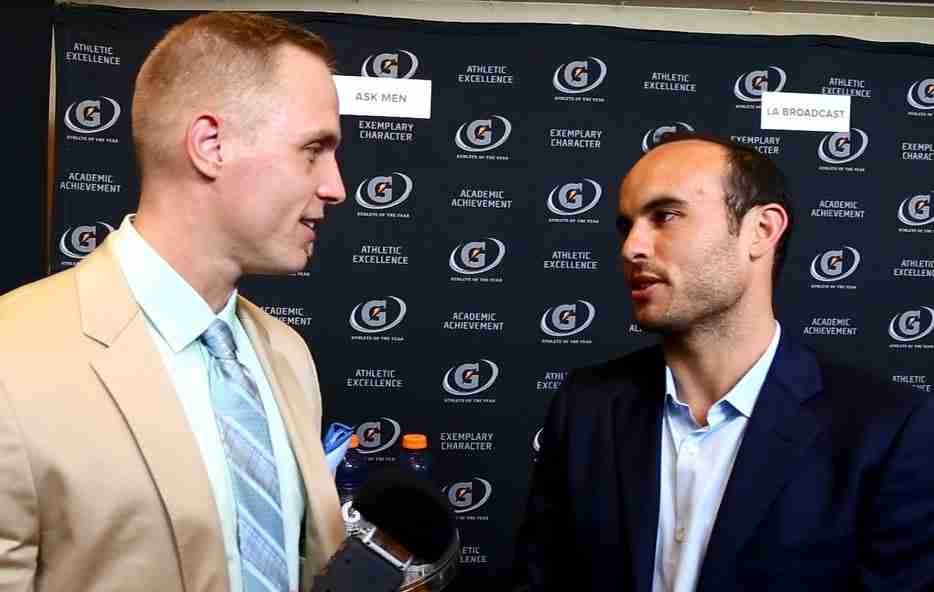 Landon Donovan is the greatest American soccer player ever. And he became that while no one was watching – literally.

“In the early days, there were two barometers,” said Donovan, the all-time leading scorer in the history of Major League Soccer about the attendance problems that once plagued the earliest days of the league.

“One was, a lot of the games weren’t televised. I remember games from early in my career where I scored a goal or two goals and there is literally no footage of it. I couldn’t watch it right now if I wanted to. Which is crazy to think of.

“And the other thing was, we had games on a Wednesday night, mid-week, in stadiums that were NFL stadiums. I remember playing at Gillette Stadium, Mile High Stadium, where, during the game you could literally hear people say, ‘Hey Landon – how’s your sister doing?’ It was like you were playing in a high school soccer game. When you juxtapose that with that with what you see today, it’s pretty remarkable.”

Donovan won a record six MLS Cups and was the league’s all-time top scorer with 145 goals (until Chris Wondolowski scored 146 on 5/18/19) and all-time assists leader with 136. The league changed the name of its MVP award to the Landon Donovan MVP Award.

How weird is it to have an MVP award named after you, in a league you once dominated? (watch Landon answer this question here)

“You know what? This…this is going to sound crazy, but this is the first time I’ve really thought about it, now that you just asked it. I don’t want to sound jaded, but you get to a point where those things mean a lot – it’s a special thing. But there’s other things going on in your life that in each given moment, are more important. So I’ve never thought about it in that way. It is really special. I’m very proud, because I worked hard to make it happen, and I’m very grateful.”

Of all professional sports, soccer may get the least amount of credit for degree of difficulty. After coaching youth soccer for several years, I willfully admit how “easy” it looked. But it isn’t.

A group of fans in downtown Los Angeles discovered this for themselves when Landon set up a goal and asked fans to jump in and play keeper.

“We setup shop right in front of the Buffalo Wild Wings in front of Sherman Oaks in LA,” said Landon. “I don’t think people really understood what was going on at first. We had a goal there and I was just juggling the ball, passing it around with people walking by. And then I walked over and said, does anyone want to try and get in goal and save some shots? I don’t think people knew if I was for real or not. But then we got a couple people who were pretty brave and wanted to be the first ones so, they suited up, got in goal, and I just got to unleash on them it was really fun.”

Q & A With Landon Donovan

How many miles per hour can you kick a ball?

Landon Donovan: I think generally it is probably in the 70 MPH range or so. But I think the really strong guys can kick it in the 90s or so.

Did the fans expect you to kick the ball as hard as you are able to?

Landon Donovan: I don’t think they expected it. And there were a few particularly kind of macho guys that were competitive and I think really believed they were going to get in there and stop some of the shots. I made sure for those in particular I focused a little more.

What was your overall conversion rate on the day? Like 80%?

Landon Donovan: Probably…I think 80% is probably right. Not bad for an old guy.

I saw some early MLS highlights of you when you had the frosted tips going on – as we all did –I’m not going to deny it. What do you remember about that time period and style in that time period?

UGH. I was such a dumb, naïve, twenty-year-old kid that didn’t know what he was doing. Ugh..I…I…I don’t know. I mean, you just want to stand out. You want to be brash.

The problem was, is that I should’ve had it at least professionally done. Because I would literally sit in my sink and rub in the dye. So there were all kinds of spots missing and half the time it would come out orange as opposed to blonde. It was just a disaster.

I did the same thing! I had my head in the bowl of peroxide/bleach mix. And it looked just as good as yours!

By the way, how bad is that for you?

I’ve read some really interesting stories about the history of the MLS in its initial stages about how stripped down everything really was, to put it mildly. Is there one experience that you had that encapsulates that?

Yes. I was a lot younger at the time so I was a little naïve. But I remember the older guys having discussions, my first year in 2001, and I vividly remember guys saying, ‘I don’t know if the league is going to be around next year.’

For me, that was just the reality we lived in – none of us were sure it was ever going to make it to any level. So when you turn around and see what’s happening now, it’s pretty remarkable. And I know we’re not the NFL. And we’re not like some of the other big leagues around the world. But it’s still pretty remarkable to hear them realistically thinking about just folding the league and quitting, compared to where we are today.

So the fans weren’t taunting you; they were legitimately concerned with how your sister was doing.

Yes! Ha ha. It was probably my uncle asking me!

I’m curious about the early portion of your career, prior to the MLS experience. What is your earliest soccer memory?

Wow, good question. Not sure I’ve ever been asked that. I think my earliest memory is playing with my brother in my backyard. I was probably about three years old. In roughly 1985. Again, at that time, literally nobody played soccer – I’m not even sure why my brother was playing. My mother was really adamant about me playing – I was a really, really hyperactive kid and that was the best way to burn energy.

The reason I asked about your earliest soccer memory is because I coached my 8-year old daughter’s soccer team this session and today we actually won the league, she had five goals in the final. As a coach, you want them to be excited, you want them to feel good about themselves. And it made me wonder how impactful those early years were for you.

It’s a good question and it’s well-said, because they were vital to me. Without getting too philosophical or personal, my childhood was a little bit rough. And so soccer became an identity. I was playing so much at a young age, when I got to five and 6-years old and started playing organized soccer, I was way ahead of the other kids. I got a lot of attention and recognition and built an identity that way. And like you said, you want them to do well and feel good about themselves and that was a place I could go out and play and feel good about myself.

In terms of goal scoring, what attributes of a keeper do you value the most-highly in terms of being difficult to score against? What makes a keeper great? Is it intuition?

Yeah. For me the biggest deterrent was making the goal look small. They didn’t have to be 6’ 5” with a big wingspan. But if the way they used angles, and timing as far as when they came out to put pressure on you, they could shrink the goal; that always made it hard on me.  If a goalie stayed back and appeared smaller in stature, it made the goal seem big and gave you a lot of confidence. That was always what I wanted. And conversely, when a goalie did the opposite, it made you really think about trying to score, that you’d have to hit the perfect shot. And a lot of times you’d miss because of that.

What is your greatest moment ever? What is the one event you experienced that made your heart almost beat out of your chest because you were so excited?

There’s two of them.  One was in 2010 at the World Cup scoring the goal against Algeria that put us through to the next round. Just because of the – and I don’t want to be too dramatic – but because of the historical significance. Because of the timing and what it meant for our team. And helping to grow soccer. And the other was the first time I walked out of the tunnel for my first World Cup game for warm-ups in South Korea in 2002. I was walking with a buddy who I had come up through the ranks with for four years prior to that. And I just looked at him and thought, ‘Can you believe we are doing this?’ We both just had this huge smile. Because it was our dream. It was absolutely, literally, our dream come true.

At that point when they’re asking about your sister, they really don’t care about her well-being…