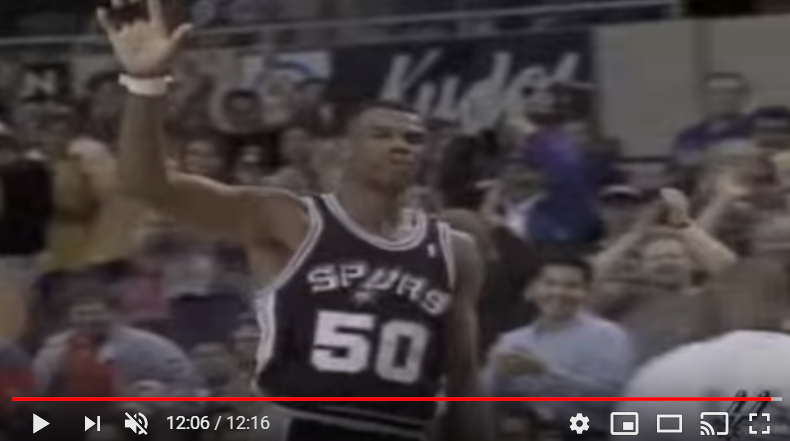 A lot of Spurs fans seem to think that David Robinson’s performance against the Clippers doesn’t get the respect it deserves. Namely, that Kobe gets more love for his 81 point game.

My response is, why wouldn’t he? He scored 10 more points. And that’s only one of five reasons I can think of.

With nothing to play for as a team, the Spurs only focus was getting Robinson the ball as much as they could. Suffice it to say, most NBA players could have a career scoring day if they were the sole focus of the outcome, regardless of what was happening in the game.

What’s more impressive about Kobe is that he did it gradually, in the normal flow of the offense. When it became obvious he had the hot hand, he was given the green light. Two other players (Chris Mihm and Smush Parker) had double figure scoring outputs during his 81 point game. The second highest scoring Spur during Robinson’s 71? Dennis Rodman with eight.

The Spurs had already clinched a playoff spot and the Clippers had been eliminated from playoff contention. And it was the last game of the regular season.

Conversely the Lakers were a game above .500 (20-19) losing to a bad Raptors team (14-25) by 15 at halftime and 16 early in the third quarter. Kobe’s team needed him to step up and he responded in the second half, carrying the Lakers to victory.

Robinson’s performance was great, but he had a lot less on the line. The whole offense was setup for him to take 41 shots and 25 free throws. Kobe took his 46 shots and 20 free throws without preferential treatment.

Which is why he was able to score 7 points in the last minute, five of them on free throws, in a game the Spurs would win by 15. Robinson scored his 64th point on a free throw with 1:33 to play. Spurs coach John Lucas then instructed his team to foul the Clippers intentionally even though the Spurs held a 101-80 lead.

“Robinson was spectacular,” Clippers coach Bob Weiss said after the game. “I think the foul situation was a little ridiculous, though.” Kobe scored all his points in a legitimate fashion, within the flow of the game.

Most Of Robinson’s Shots Were Made From 10-15 Feet

As a center, this goes without saying. Does this mean he didn’t work as hard as Kobe did to score? Not at all.

Robinson was double and tripled teamed the majority of the game, especially in the second half. It was a great performance by Robinson, no doubt.

But, it just wasn’t as impressive as Kobe’s. Bryant was hitting shots from all over the court- dunks, deep jumpers, three pointers; you name it. It was a display of scoring and overall skill that few in the game could ever rival.

Robinson’s scoring binge was epic, one for the ages, no doubt. But to say it was as good as Kobe’s is a mistake.

Whose scoring output impressed you more: Kobe or The Admiral?

NBA Players By College: What College Has The Most NBA Players?