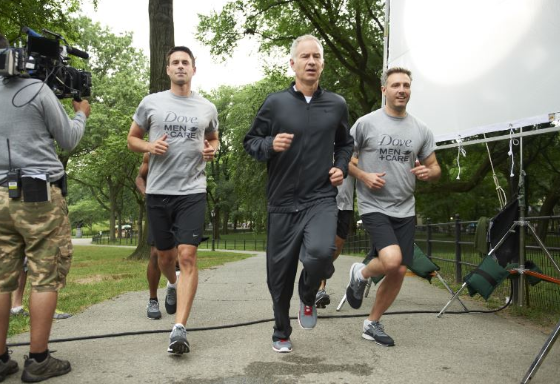 McEnroe is serving as “Anti-Irritation” coach to the Dove Men+Care Marathon team, a group of five runners that elected to run with 48-hour anti-irritation protection on their side. The best part is, readers can enter DOVE’s contest to run the marathon and occupy the team’s two final spots!

Johnny Mac will be ready to chide, deride and humiliate the members of DOVE Men + Care 2013 NYC Marathon team and you could potentially be dehumanized by the most historically significant US tennis player of all-time.

“”With me being the irritable type, the product we’re working with at DOVE made sense,” he said in a recent interview.

John only wants the best for you, and his level of apparent irritation as he trails you with a bullhorn is only spewed at that sad-sack that you refer to as a “body” because he’s irritated; irritated at inferior men’s skin cleaning products.

“I know a thing or two about irritation and I am giving these guys tips so they can make it to the final mile without any distractions,” says McEnroe.

While Dove Men+Care Antiperspirant/Deodorant has anti-irritating underarm care covered, McEnroe is tackling physical and emotional irritation on the road, starting with a series of humorous shorts.

Johnny Mac used to break rackets and degrade line judges in tennis to release stress and irritation. And he isn’t alone.

Approximately 56 million U.S. men currently experience underarm irritation, and research shows many men are likely to have that irritation at the forefront of their minds during important life moments. The greatest salve of all for stress relief? Going for a run.

Research commissioned by Unilever found that 62 percent of men have experienced some irritation from deodorant, and that when it came to choosing a deodorant, a nonirritating formula was the third most important attribute, behind efficacy and scent.

Register here for a chance to join the DOVE Men + Care Marathon Team and run in the 2013 ING New York City Marathon.