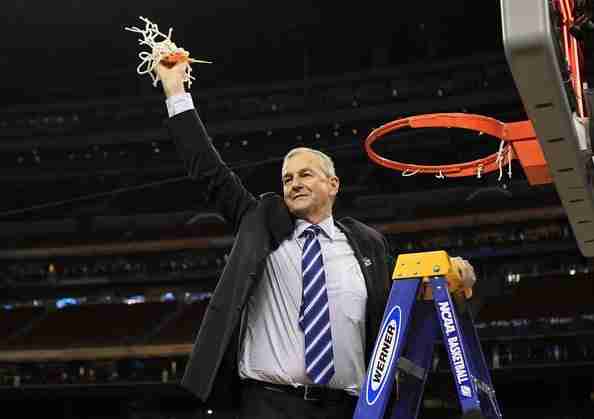 Before Jim Calhoun ever coached a college basketball game he worked as a grave digger, a granite cutter, a headstone engraver, a scrap yard worker, and a factory worker.

His father died when he was 15 and as the eldest boy, the responsibility to provide for the family – a total of seven people including himself, his mother and five siblings – fell to him.

Calhoun earned a basketball scholarship to Lowell State, only to have to leave three months after school started to support his family. It was over the next two years that he worked the aforementioned jobs.

“Those years I worked, I was upset that I wasn’t in college.” said Coach Calhoun when I asked him to reflect on that time in his life. “When I wasn’t around that environment I thought, ‘Maybe there is another plan for me.’ And part of the plan was that I built confidence in myself, in what I could do. And learning how to work for something that you really, really think is meaningful. That you really care about.”

The plan that Calhoun wondered about as a younger man would eventually reveal itself as 873 head coaching victories and three NCAA National Championships.

Only four other coaches have won that many titles. Their last names are Wooden, Rupp, Knight and Krzyzewski.

The wins were great but the most important thing, said Calhoun, were – and still are – the relationships.

“I found out with the all players that I didn’t recruit them for a minute, or a career – I recruited them for a lifetime.

In speaking with Calhoun, even if you knew nothing about basketball or his coaching career, it is apparent you are talking to a leader.

A person of great strength. You can just feel it. His energy level is through the roof. His body may have been on earth for nearly 75+ years, but his spirit is boundless, timeless.

His rapid fire delivery is so quick, he has so much experience and wisdom to imbue, his mouth and jaw can’t sync up at times.

Particularly when I asked him about his philosophy and approach to life.

“If you attack every day, it’s pretty tough to lose. Are things going to get in the way? Yes, we actually lost games – I know, it’s shocking.

“We lost games, and maybe you had things happen in your life. And things that didn’t go quite as well as we’d have liked them to go. So, OK, good. Now in this day, you’ve got an opportunity to fix all that stuff.”

How special is it to work with Kevin Ollie considering you recruited him as a player?

Our program was built upon a family atmosphere, about relationships, about the strength of the program, how we cared about each other. Kevin, all these years ago, 27 years ago, from South Central L.A. Crenshaw High School we got together and pretty soon we found out a lot about each other. He put a lot into me by coming 3,000 miles east to go to school in Connecticut from Los Angeles. It was a little different as you can imagine!

When you were talking to a recruit and getting them to buy in to the program, you can only make certain guarantees – ‘I think you’ll start,’ ‘I think you’ll get a lot of minutes.’ How do you balance those initial expectations with when it’s actually happening and unforeseen circumstances arises?

I just think you’ve got to make sure that everybody gets the picture. For example, if you tell me you want to be a great player, I’d say, be careful about that. Why? Because that means you’ll have to do a great amount of work.

You’re going to have to have a great amount of focus. You tell me you want to be great, I’ll always believe you. And therefore, it’s very, very important that you understand this is going to be a great journey and there’s going to be days when you’re not going to like me because I am going to demand so much of you.

But I only throw so much at you because I truly believe in you and think you can do this.

You’re the head guy and everyone is looking at you all the time. The team, the administration, the fans are all feeding off of you constantly. Where does the confidence come from to meet the demands?

It’s not even confidence. It’s an ability to know that you have to attack every day as a tremendous opportunity and you attack every single day.

It’s pretty special when you can do that. And that’s what I did. If you attack every single day – people have great plans all the time. And then life gets in the way. My point is, I learned how to do that first hand.

A guy says, “Well I had a tough time as a kid.” Really? Guess what? Not my problem; join the club. Because there is so much more that you can accomplish. That’s what I sell kids, but it’s not just selling. It’s believing it’s going to happen to them.

I think all of us can meet people that when we meet, you can see they believe what they are talking about and that’s the number one thing.

How do you deal with people who don’t understand your passion? And think of it as something else, like arrogance?

And if other people didn’t see what I did and have things to say about what I did? I can’t control that. I believe in myself. How do I feel about the team? It was my responsibility to coach the kids in every part of life.

Some of the greatest people I’ve met in life had a deep sense of insecurity because things had been taken away in their life and the key thing you want to make sure that happens is that you’re always prepared for the next thing that happens. And I was. If I’m going to work harder than you, don’t blame me for that.

Of the three teams you coached at UConn that won National Championships, which one was your favorite?

Back in ’99, it was the culmination of so many years of coaching, so many years of almost getting there, so many years of Christian Laettner making a shot against us with no time on the clock. All those things that happen to you and all it did was fortify me and make me more persistent until we finally get there.

Then we had the 35-2 team, beating Duke, all those things are incredibly special for us.