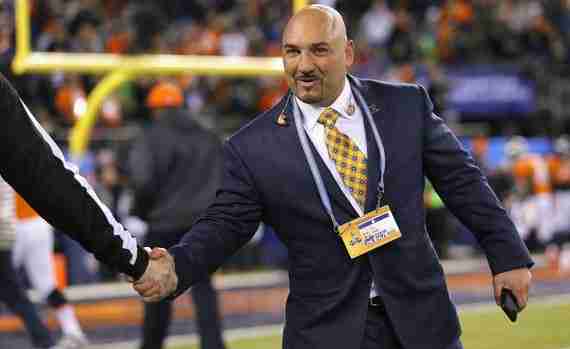 The coolest thing about Jay Glazer is that he is living the dream and he knows it. But it didn’t show up overnight, as he explained in this interview.

Does your phone ever stop ringing? Or is there always some dude from some website like me at the other end?

Jay Glazer: “The phone never stops. I’ve got to take every single call that comes in. I was on a date with a young lady last night and I told her, ‘These calls are going to come in and I’ve got to take every single one.’ Because you can’t just take one phone call and use someone for info; it’s about relationships. You build relationships and the scoops come your way. You have to figure out how to broker information the right way. So it’s non-stop.

I have one head coach who I won’t name who calls me on his way to work at 5 AM. And I asked why he liked to call me so early. He said, ‘Because I just like to piss you off in the morning, because this is all the time I have. As much as you mess with all of us, I have to screw with you.”

What’s their incentive to give you inside info?

Jay Glazer: “It’s a loyalty thing, and I’m a a loyalty guy. If it’s going to come out anyway, it may as well come out through me. People want information. I’m an information broker and my job is to get more stories and scoops than anyone else. And I’m not talking about breaking someone’s contract, I’ve done that, everyone knows that. I care about the big scoops that people don’t really know about. I try to come out of left field with stuff.”

What was your biggest scoop of all-time?

Jay Glazer: “That’s a no-brainer: Spygate. With the Spygate video, my life changed that day. What people don’t realize is that it was my second day in the studio with Fox. Here you are with Howie Long, Terry Bradshaw, Jimmy Johnson and Curt Menefee and no one wants to give up their stake of the top show out there. Then all the sudden I’m getting three segments, then four segments. I’ll never forget sitting there and they go, “Four segments? Why are we giving this guy four segments?” And our producer said, ‘Well, Jay has the Spygate video.’ And Howie Long says, ‘Hold on, hold on, hold on – you’ve got the actual Spygate video?’ And I was like, ‘Yep, I have the video.’ And Howie again was like, ‘Hold on, hold on, hold on, back up – you’re saying you have the actual video?’ And I said, ‘Yep, sure do.’ And Howie was like, ‘Four segments is fine with me!’ From there on out, I was part of the family. It completely changed my life. Thank God Almighty.

This job is more than just breaking stories. Then, you’ve got to cover your tracks. Congress launched an investigation into how I got the Spygate tape. Senator Arlen Specter called me basically telling me I have to give him the tape. I told him no, I don’t have to do anything. They were negotiating with me to supposedly get me something bigger and better. But I said, ‘No offense here Senator, but I’ve got a grand slam in the bottom of the ninth with two outs at the Polo Grounds in the World Series against the Yankees. There is nothing you can give me that’s bigger.’ And he said, ‘Well, I’ve got something bigger.’ And I told him ‘I don’t think you do. I appreciate it, but I don’t feel comfortable dealing with Congress.’ That shows you how big that thing got, dealing with Congress.”

Talk about what you were doing before Spygate and what your life was like before making a name for yourself?

Jay Glazer: “For the first 11 years of my career, the most I ever got paid in one year was $9,500. For 11 years, I was a bartender, I boxed, I did anything I could in addition to writing and building relationships. I just wanted to be real with who I was. My brand is to have a lot of fun. All I wanted was to live in a place where the ceiling wasn’t going to fall in and I wasn’t going to have trouble with the criminals outside when I walked out. So, thanks to God Almighty in Heaven, I am living the dream, man.”