Paul Eide: I want to talk about an AL central rival the royals and particularly Salvador Perez and how amazing is the season he’s having, in your opinion?

As a as a former AL MVP, two-time in your case, what he’s doing with no protection in the lineup, am I overblowing it? Or is the season he’s having just that awesome?

Frank Thomas: No, you’re not overblowing it it’s been an awesome, incredible, historical season for Salvy. Salvy is one of my favorites i said all the way back in 2014, I think he’s a playing Hall of Famer.

And people thought I was crazy but I saw his attributes – what he did behind the plate and his hitting, and holding runners, calling games and he’s a complete catcher. And to watch him excel this year without any of the big power hitters behind him anymore it’s an amazing feat.

I really believe he’s in this MVP race and I don’t know what’s gonna happen now because of his performance at the end of the season, he might steal some first place votes.

I think its gonna come down who gets all the second place to determine the MVP this year.

Paul Eide: That’s a really good point i hadn’t even thought about that. Did Salvy just pick the wrong year because of what Shohei is doing?

Frank Thomas: Yes, I mean I think they both (Salvy and Vlad) did. But you know you got to think about what they’ve got potentially happening down the stretch. And Vlad you know yeah still has a chance of walking away just because they’re one game back from making the playoffs with a week to go in the season.

And, he plays the Yankees three games on national TV. So you know you’re gonna get to see him.

And if you have a big six games to close out this season on national TV, Vlad could sneak away with MVP this year too. And it’s not sneaking because he’s basically been in the triple crown race all season long, battling Salvy for home runs and RBIs.

He’s been flirting all year. so any way you slice it, and whoever wins, just an incredible year for all three of these guys.

Even if Salvador Perez does not win the 2021 American League MVP award, he has solidified his place in history as one of the best catchers of all-time.

Even though it seems like a million years ago, Salvy won a World Series in 2015 and appeared in back to back versions of the Fall Classic. He was also the World Series MVP in 2015.

Perez is a seven-time All Star, a 5x Gold Glove winner (will be six after the voting is completed for 2021), a 3x Silver Slugger winner, and was the 2020 AL Comeback Player of the Year.

But what is overlooked is how great he is on defense.

“Opponents have had the opportunity to steal a base 1,338 times on Perez this year. However, Perez has only allowed 19 successful stolen bases. 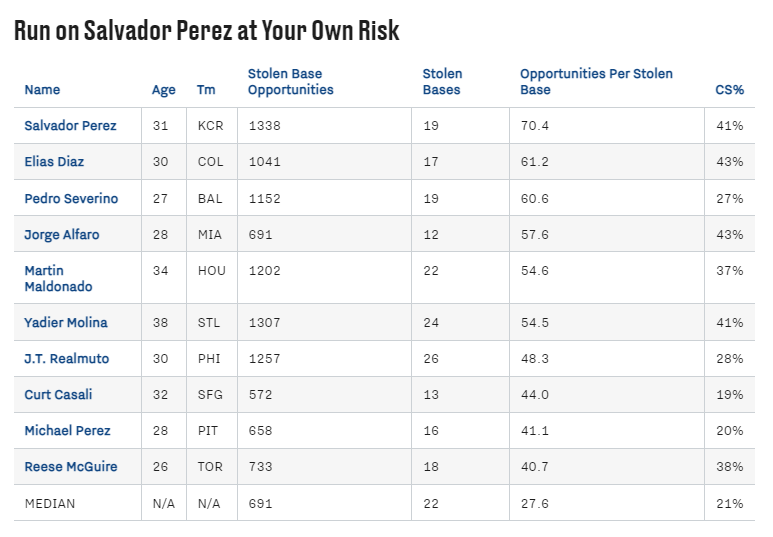 Between Salvy, Vlad, and Shohei, Salvy and Shohei have contributed just as much defensively, as they have offensively.

I think that makes this a two-horse race for AL MVP. And Salvador Perez has every reason to consider himself the 2021 winner.

Varilux changed my life; it is the #1 progressive lens in the world. So as for most of us around 40, we develop presophobia which is a condition. And to be honest you know i had 20/10 vision my whole baseball career. And then around 45 to 47, you know, you started stretching out those menus, those text messages and all the apps, it all became hard to read. I thought something was wrong with me so I’d reach out to my eye doctor and he was laughing at me he’s like “welcome to being old.”

That condition is real and uh you know you need to do something about it.

Make sure you check us out at varilux.com.  You need to see your eye care provider though so you can get these lenses.