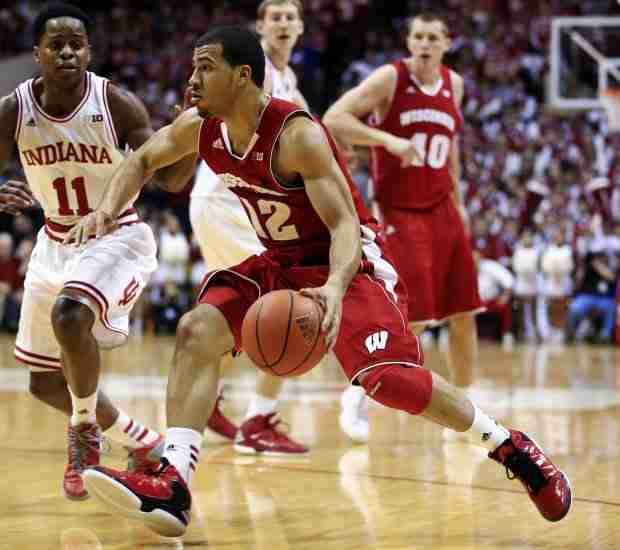 Even though he just recently finished his sophomore season at the University of Wisconsin, Traevon Jackson comes across just like his game – confident, smooth and mature. For being just 20 years old, he’s so calm and composed, you can’t help but think about where you were in life at 20….and then sheepishly quit punishing yourself.

Jackson was second on the team in free throw percentage (.765), first in steals (1.0 spg) and 15th in the Big Ten in assists. Traevon spoke about his experience in the NCAA Tournament, playing against Naismith Award winner Trey Burke and who’s the better player- him or his dad.

What was your experience like playing in the NCAA Tournament?

Traevon Jackson- “Obviously, it didn’t end the way we wanted it to. Just playing in the tournament was great, getting that kind of experience. You really grow up fast because it’s the attitude of “loser goes home” and unfortunately, we had to go home. But it really puts into perspective what you need to do to prepare for it going forward. And learning that this year, helps us next year.”

Is there added pressure based on who your dad is (14 year NBA vet Jim Jackson) to succeed? What’s the dynamic of that like?

TJ- “Growing up, I felt it more than I do now, but now I don’t even think about it at all, actually. The pressure that I feel now the most is pleasing the Lord. That may sound cliché, but that’s an everyday type of task and the biggest thing for me. As long as I continue to grow in that aspect, there is no other question.”

Did your dad give you a hard time when you went to Wisconsin instead of Ohio State?

TJ- “No, he supported me. He told me what I was getting into as far as the coaching staff and what to expect, and he was right; he was right about a lot of things.  At the end of the day he was just happy for me because he had seen where I started from in terms of basketball and what I had become. He was just very happy for me, and my mom too.”

Who would win one on one right now?

“Oh, me of course (laughing). Easily. He can beat me in golf and all the other games, cards, all that stuff. But he’s not beating me on the court.”

How did him moving around during his NBA career, playing for 12 different NBA teams, impact you as you were growing up?

TJ- “It was great. I got to go to a lot of different cities and see a lot of places I wouldn’t have probably otherwise seen. But, just from watching him, I got to really go through and experience his career with him. He started out as a top guy in the league and eventually became a productive role player. Just seeing how he handled it was awesome.  It taught me to never give up, no matter what. I think about it now when I go through adversity, I never saw him put his head down; he always found a way, just like my mom. Just keep working hard and good things will come.”

You just finished your sophomore year and you were a big part of the Wisconsin rotation, playing almost 28 minutes a game. What helped your development the most between freshman and sophomore year?

TJ- “Mainly going home and working with my trainer Anthony Rhodman. This was my first full summer going back home and doing all the skill work that I needed to work on. Coming back in this year I was way more confident and better overall. It took a little while, had to go thru adversity. I didn’t achieve all the goals I wanted to, but the little bit of success I had is like a glimpse of the future.”

How’d you hook up with Anthony Rhodman?

TJ- “I saw Trey Burke going off in Ann Arbor. We were seniors in high school at the same time and he was killing that year; he won Mr. Basketball, all the awards and I asked him, “Who are you working out with?” And he told me about Anthony. Then I heard Trey talk, and I’d never heard him say so many things he was saying about the Lord, so I knew he had everything straight. And it took me off guard so I wanted to talk to Anthony. I hit Anthony up to introduce myself and he had heard of me and was planning on talking to me. We just hooked up from there and started working.”

Who would win one on one between you and Trey Burke?

TJ- “Deron Williams. I love D Will because he’s a bigger guard and I always see myself being like him; the way that he uses hesitation and the between the leg dribble. He’s explosive and can do it all.”

What’s the most annoying or creative heckling you have heard in any Big Ten arena?

TJ- “A lot of stuff about my dad, believe me. But I’ve heard that forever so it’s rare I hear anything new. There was this one lady at Indiana after we beat them. It was after the game and I was walking off the court and she was just sitting there on the sidelines. I was walking off the court and apparently I was smiling, even though I wasn’t aware of it, and she said, “There’s nothing to be smiling at!” It caught me off guard and I thought, “Why are you so mad?” That’s one thing that comes to mind. Fans always say “Jimmy’s better!’ (laughing) but I’m so focused on the game I don’t even pay attention except at maybe at a dead ball.”