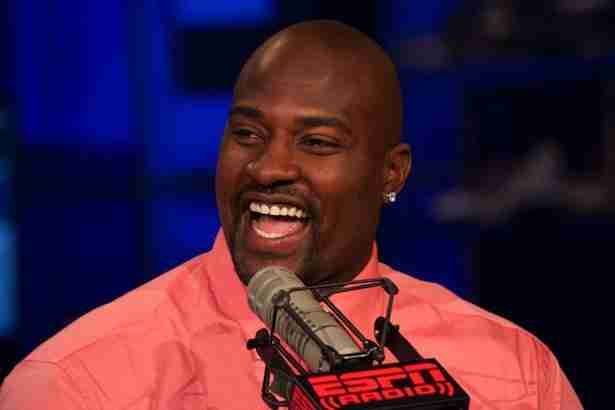 To say Marcellus Wiley is an engaging conversationalist is like saying Einstein was pretty good at math.

So engaging in fact, that the ten-year NFL veteran’s personality outgrew his sizeable 6-4, 275 pound frame and mutated into “Dat Dude”; Wiley’s off the field entertainment persona that specializes in throwing ridiculous parties, mackin’ all the fly ladies and starting successful business ventures, not necessarily in that order.

Whether it’s “Prolebrity” a project mixing professional athletes and filmmakers on the silver screen or “La’Tik” a fashion boutique he opened in Santa Monica, Wiley hits on all cylinders as a human being and does not limit himself to the title of “Former NFL All Pro.”

I spoke to Marcellus about working on ESPN, the NFL Draft, Jeff Fisher and Madden ’08.

How did you end up on ESPN?

“Actually, it just kind of worked out. I didn’t have to send in an audition tape or anything like that, like most guys. But as a player, when you do ESPN you go there all day and do all the shows while you’re there. Like in the morning I did Sportscenter and in the afternoon I did PTI, and so on. So after doing this a couple different times, they liked the way things were going and it progressed from there.”

What’s the biggest change in the way you perceive the game from being a player to now being in the analyst’s chair?

“There’s really not that much of a difference. When you’re a player, you get this huge game plan and you have look at everything and find tendencies and find what sticks out, ‘How are they in the red zone’, ‘How are they on third down?’, etc. The difference in being an analyst is that there are different kinds of analysts. There are the ones who can just spit the stats out and be a fact finder and then there’s the conversationalists, guys who just talk and talk and you just kind of sit there and interject relevant points and keep the flow going. I want to be the latter. I’m not gonna bore you with a teams rushing yardage or some other inane statistic because who cares? You can go look that up on NFL.com. People always respond to the funny stuff, the stories about coaches and players and I try to slant it towards having an entertaining experience.”

Speaking of seeing you on ESPN, after Atlanta hired former Jacksonville defensive coordinator Mike Smith last week you were on ESPN questioning if that was necessarily the right move. Why do you think this isn’t a good fit?

“Because the one thing Atlanta needs right now after the Petrino disaster is a coach who commands the respect of the players. Not only because of the way he left, but because of how the players responded to him while he was there. Point blank, they didn’t respect him. And now with Mike Smith coming in, in my experience, he is a quality defensive coordinator but he isn’t going to be able to come in and command the players respect like what they need. I played for him in two years in Jacksonville and I just think they went very low on the totem pole with this hiring. Jack Del Rio may wear the title of “Head Coach’ but he was essentially the defensive coordinator as well. As a former linebacker he (Del Rio) is obviously defensive minded and pretty much ran the defense by default. And if it wasn’t him it was (middle linebacker) Mike Peterson. As a player and in meetings with him, he may have been the defensive coordinator but he was more or less just in the room while Jack Del Rio called the shots and players don’t respect him.”

If an untested guy like Mike Smith can get a job, why can’t your former coach Marty Schottenheimer get any respect in this league? And why did GM AJ Smith do him like that?

“Marty’s personality is very different than AJ’s. Marty was all business for the most part but he was also a guy who could lead you into battle and relate to you because as a former player he’d been there himself. AJ was and is always strictly business, short and simple. Plus he had never played so I think those personalities being different from day one was a big part of the problem. I think a big reason why Marty isn’t a coach right now is because they let him go after all the coaching vacancies were filled and essentially he had a whole year to sit out because of the timing. If he had the chance at the time to get another job he probably would have. But instead he had to kind of take a step back and reflect and maybe he decided ‘Let me enjoy this semi-retirement and let me think about where I’m going next.’ Maybe no situation has been ideal for him because the only knock on him as a coach is he hasn’t won the big game in the post season and maybe he’s waiting for an opportunity that’s ideal where it’s a team on paper he knows he can take them to the post season. It’s hard to say.”

What do you think of the whole mess in Oakland between Al Davis and Monte Kiffin?

“If the Raiders continue in the front office like such there going to be the next expansion team in the arena league. The AFL is gonna come in and say. ‘We’re gonna take the Raiders off your hands, NFL.’ It’s just crazy. It’s the Raiders, man! Some franchises you just grew up and had a certain mystique; the Packers, the Raiders, the Steelers, the Cowboys, teams like that. It’s really sad to see the team spiraling downward at a very rapid rate. You have to have stability in any situation if you want consistency and success. You just can’t keep changing stuff because quick fixes don’t work. I don’t know if Al Davis is the sole controller but it’s not about quick fixes.  When you don’t give your coach a chance, you essentially aren’t giving your players a chance.”

With free agency about to start in a month, do you see a team that will come out like the Patriots did a year ago and sign all the top talent on the market?

“There are some teams in position to do that, particularly the Tennessee Titans. They have a reported $36 million under the cap, are a team that made the playoffs and are very close to making an impact. If you get Vince Young a few wide outs this team is poised to make a big jump. If they sign those some of those guys open the market, and guys like their own Albert Haynesworth, they could find themselves in a spot to challenge for the AFC title. You know Jeff Fisher is going to bring it and he always does with minimal talent, so imagine if they got him some horses.”

Is Jeff Fisher the most underrated coach in the NFL?

“If I scanned them all he is certainly on the list. When you’re a blue collar team in a blue collar city success is kind of expected, and his success is just kind of seen as another day at the office for him. There really isn’t a lot of noise that comes out of there, unless Pac Man Jones is hanging out then there is noise, but other than that it’s pretty much a team that just sits under the radar. Playing against him all the time you knew that you were up against a well coached team that played very physical, and try to hit you in the mouth. His teams were and still are the most disciplined and that’s why he is successful year in and year out regardless of roster.”

As we get closer and closer to the Draft, are you hearing any credible rumors?

“Well, definitely the one about the Dolphins trading the #1 pick in exchange for multiple picks. They have so many holes to fill you would get a tremendous value for some team that is aching to get the #1 pick. Another team I’m hearing rumors about is the New England Patriots. If they win the Super Bowl, why do they need the #7 pick?  Why not drop that down to the 20’s or 30’s and get two or three more picks because obviously you don’t need any players that are available at the top of the Draft. The only thing they need is a linebacker, but Belichick doesn’t like drafting young linebackers, he likes veterans. The Patriots trading down wouldn’t surprise me, but other than that it depends on team
needs.”

Do you think the depth at QB in this year’s Draft has been over hyped?

“Definitely. If you look at the QB’s, even the scouts are scratching their heads saying, ‘Where are all these great QB’s were hearing about?’ But I think it goes even beyond that just this draft. The QB position, even the last several years, outside of Peyton and Eli, which QB has been drafted and has been continually successful? Now more than ever the NFL is really thin at QB and initially I don’t think this draft class has much to offer in the way of a remedy. At least not in 2008, that much is for sure.”

Do you think having a degree from an Ivy League school like Columbia gets you in doors you wouldn’t otherwise get in?

“No doubt! It started when I graduated and went to the Combine and took the Wonderlic test. All the guys were like, “Hey ask Wiley about this answer. He’s smart.’ The assumption is always there which I like because I earned it. It’s the same reason athletes go to the big name schools for athletics; they want to test themselves against the best and see how they stack up. I went to class and studied with some of the smartest people in the world. Not too many guys are lucky enough to be introduced as an NFL defensive tackle one minute and a Columbia Grad the next.”

You’re from Compton, California originally and you ended up in the Ivy League and obviously the NFL. Talk about dichotomy! I bet you have some great stories.

“That’s the reason I’m writing a book. And it’s not because I’ve won the Super Bowl and I’m riding into the sunset or anything like that. It’s a perspective book of “Dat Dude’s” diary and it goes from Compton to Columbia and you can see the extremes in those situations. Then you go from the Ivy League to the NFL, which is another