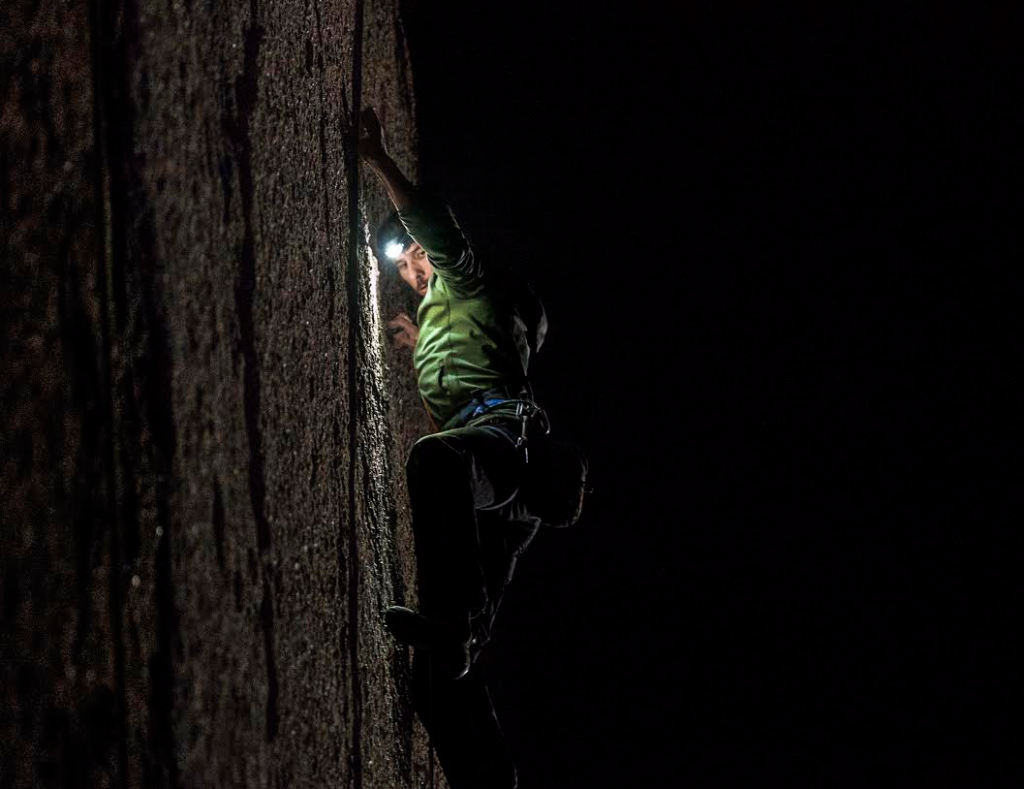 It may not rain, it may not be cold or windy…but it always gets dark. In the outdoors, light is essential. Experts trust Duracell Quantum to provide dependable power in the dark because it lasts longer in 99% of devices.

During Kevin Jorgeson’s free climb of El Capitan, he trusted Duracell Quantum to power him through the night so he could climb in the dark and be one step closer to reaching the top.

I spoke to Kevin about his epic 19-day climb, the wear and tear on his body and his partnership with Duracell.

How are your hands? I’m worried about your hands.

I wish I could say you could still see the battle scars, but unfortunately they are all healed. I was actually quite sad when they healed because it was the last physical remnant and evidence of the climb, you know? Now it is literally all memory.

How did you partner with Duracell?

I’m pretty selective on all my partnerships and I try to work with companies that I am already using their products. So that includes my climbing shoes, my harnesses, the equipment we use to stay on the wall, and that goes for batteries too. So when we started this conversation, it was a natural fit. I had been using Duracell for years, we even had them up on the wall (of El Capitan). It was something that already existed, and it just meant that now we’d be able to tell that story.

What does “free climbing” mean? Does that mean you walk up to a mountain and climb it, with nothing?

No, the word “free” kind of messes with people’s perception. Really, it’s climbing as you would imagine climbing — it’s just climbing. 99% of climbers are free climbing. Meaning we climb, but we use equipment to catch us if we fall. And we fall a lot. It took us six years to put this thing together. Six years of a lot more failure than success. It wasn’t like we just walked up and climbed this thing. We started working together on this in 2009.

Why did it take so long for someone to be able to free climb El Capitan?

It’s just so hard, man — it’s so hard. The biggest day of the climb, distance wise, was day one, and that was only 500 feet. Every day after that was 200 feet. Our best case scenario for this climb was 12 days. But I got stuck for a week in one spot. So that’s why it took 19 days.

One of the hardest things about climbing the Dawn Wall, and it sounds lame, is the skin on your fingertips. You cut your fingers on the holes that you’re grabbing and you have to put tape on to cover your cuts. The problem is, there is a big difference between calloused skin and tape. We’re climbing as hard as you can climb on vertical granite. Every little bit counts. So when you have two taped fingers, it totally changes your ability to climb. And that’s what happened. I kept going through this cycle where I would rest until one of the two would heal, and then I would climb, then I would re-split the fingers, rest for a couple more days and try again. It was the most mentally taxing climbing experience I’ve ever had. You have to turn the disappointment of failure into motivation, all over again. And that’s a hard way to go back and forth. And all this stuff is happening at night, which made Duracell so clutch.

Most of the climb was completed at night. Why?

The reason we climb at night is because of heat. It’s called the “Dawn Wall” for a reason. It gets the sun at the very beginning of the morning and it stays in the sun until about three in the afternoon. We’re hanging onto holes and standing on little jibs of rock. So if the rubber on your shoe gets warm, or if the skin on your hands and fingers get sweaty… So you have to wait in the shade until three or four in the afternoon, [and] then it gets dark at six. We still climb for seven or eight hours, but we have to stretch it into the night. So, I had to adapt to being a nocturnal creature, really. And Duracell, and our head lamps, our lanterns and our flashlights, were critical for that.

How were your supplies delivered if you’re on a mountain for 19 days?

We have a network of fixed ropes we put in place from top to bottom like a highway system. Every five days, we had a resupply hauled up to us. It would be too much stuff to move around during the climb.

What happens when you have to go to the bathroom?

It’s a “leave no trace” effort – pack it in, pack it out. And some poor guy has to take it down.

What did it feel like to reach the peak?

Not going to lie, that was the best part. It was the most relieving part. Holding onto the top of the wall you feel all the pressure of desire, anticipation, stress, all of that falls away. And you’re just standing there, weightless, because there is nothing left to do. There’s not another pitch that is going to require you to try as hard as you ever have in your life. You’re on top. You kick your shoes off and you are done. It’s a whole new reality because for 19 days you pretty much forget what it’s like to not have that stress. So to have that be over is pretty abrupt.

Do you have to turn around and then climb back down?

Oh hell no. We hiked down the back.