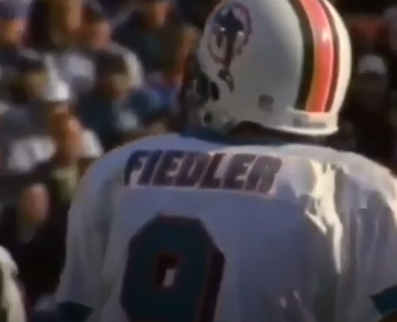 Jay Fiedler was a much better quarterback than you definitely remember.

The year is 2016. Six 20-year-old sophomores at Quinnipiac University are nursing hangovers in their dorm. They decided to dust off the PlayStation 2, figure out how to input an A/V cable into a flat screen television, and break out the best sports video game known to man.

They put together a pick-up game where 40 random NFL players are generated, and there are only two quarterbacks. Michael Vick and Jay Fiedler. Naturally, Vick is the first QB off the board, leaving me wondering, “Who the f*** is Jay Fiedler?”

I looked at the stats, and the only word to describe this man’s career is respect. He entered the league in 1995 as a 24-year-old rookie with the Philadelphia Eagles, and didn’t make an appearance for three years.

Well, if that were the case this article wouldn’t be happening.

Fiedler was cut by the Birds after the three-year stint, but that wasn’t all-she-wrote.

He garnered a tryout with the Minnesota Vikings where he would faceoff with five other players for the third string job behind Randall Cunningham and Brad Johnson.

He’d make five appearance for the purple and gold, throw seven total passes, and get cut a year later. He’d get picked up by the Jacksonville Jaguars as a backup for the 1999 season, but that is where the 28-year-old’s career would take off.

Fiedler backed up Pro Bowl QB Mark Brunell for 15 games. He would get a chance at his first NFL start in week 17, four years after he entered the league.

He filled the stat sheet, throwing for over 300 yards and a touchdown en route to a win. Most people were shocked by the numbers, but if you check out Fiedler’s career numbers at Dartmouth College, you’d say you expected it all along.

At the small Ivy League school, Fiedler set school records for touchdown passes (58), passing yards (6,684) and total offense (7,249 yards). Fast forward to the turn of the century, and a starting job is in his grasp.

The Miami Dolphins finished 1999 with a 9-7 record, but would go through some major changes in the following off season. Hall of Fame QB Dan Marino would call it quits after 16 years in Miami, and Head Coach Jimmy Johnson resigned citing burn out as the main reason.

He would lead the Dolphins to an 11-5 season, winning the AFC East, posting a 57.1 completion percentage, over 2,400 passing yards, and 14 touchdowns.

The following year, at age 30, would be his best leading the Dolphins again to an 11-5 record. His numbers were awesome, putting up a 60.1 completion percentage, throwing for over 3,200 yards, and tallying 20 touchdowns.

Those were Fiedler’s two big seasons with Miami, in 2002 he started 10 games for the Fins and made 11 appearances. He got hurt going into a Week 7 matchup against Buffalo, but would come back to lead the Dolphins to another winning season. They would go 9-7, with Fiedler tallying a QB record of 7-3, over 2,000 yards passing, and 14 touchdowns. In 2003, things were almost identical.

Fiedler went 7-4 as a starter, with over 2,100 yards passing, and 11 touchdowns. Still solid numbers, but that’s where Father Time takes over.

In 2004, at the age of 33, Fiedler and the Dolphins started 1-6. This ultimately made Dave Wannstedt bench Fiedler for AJ Feely. After that season, both Fiedler and Wannstedt would be out in Miami.

Regardless of how it ended, you have to give them credit for what they did after inheriting that team from two Hall of Famers. Fiedler had a career record of 36-23 with the Fins, over 11,000 passing yards, 66 touchdowns, and made two playoff appearances.

Fiedler would bounce around the league to try to make a comeback, but only saw the field twice as a member of the New York Jets. He would retire in 2008 after a shoulder injury, but now I can’t help but wonder what he would’ve done if he had the chance to start earlier in his career.

I guess it’s all speculation, but I do know that he deserves an incredible amount of respect. Coming from a college that has produced very little NFL success, having not made an appearance until three years into his career, and only having one start to prove himself at the NFL level, Jay Fiedler is the poster player for making dreams a reality.

So if you and your friends are about to play NFL Street, and Jay Fiedler is available, you better get ready to light up the scoreboard.