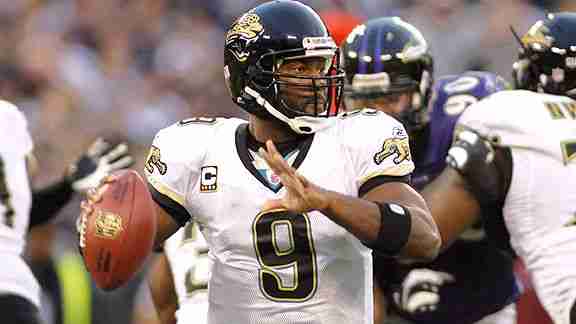 The Jacksonville Jaguars suddenly find themselves in a tough spot. The team that found itself two wins from a Super Bowl appearance a year ago, now finds itself in an 0-2 hole already facing a “must win” situation in only week three. No team in NFL history has ever recovered from an 0-3 start to come back and win the Super Bowl. But to David Garrard, history is just that.

“We can’t be thinking about ‘Oh man, we’re 0-2’,” said Garrard on his cell phone. “We have to take it one game at a time like we always have been, but we really have to do that. We just need to start winning games and everything will take care of itself.”

So far in 2008 things haven’t taken care of themselves for the Jaguars like they did in 2007. The Jags have lost their first two games by a total of 10 points and have lost the services of two starting offensive lineman (Guards Vince Manuwai and Maurice Williams) for the rest of the season. Additionally, starting center Brad Meester is still recovering from off-season surgery and back up tackle Richard Collier was also lost for the season after he was shot sitting in his car and will spend the rest of the year on IR.

“Nobody sees these kinds of things coming,” said Garrard. “Our prayers are with Richard. We hope he comes back healthy, but these other teams are not going to feel sorry for us or give us a pass just because this has happened (with the offensive line). We lost other lineman in the first game and now we just have to come together for this next game.”

So how do you regroup from losing two offensive linemen and do the fans understand how important that is?

“I don’t think most people understand how much that affects a team. When you go through an entire off-season with the same guys who have been playing these roles day in and day out it goes a long way. And now you’ve got all these new players coming in, you’ve never even seen them so what do you expect from them? It just makes it tough on you but I’ve been in tough situations before.”

The key to the Jags 11-5 record a year ago was success in the running game. The team was second in the NFL last year in rushing, averaging 149 yards a game. This season the team has only managed to rush for 131 yards in two games. The two headed monster of Fred Taylor and Maurice Jones-Drew has yet to produce the way it can, averaging only 2.7 yards per carry on 35 attempts. Fred Taylor was limited in practice all week with a sprained toe and Jones-Drew injured his ankle in last weeks lost to the Buffalo Bills.

“I didn’t even know he was hurt until I heard from my wife after the game because he still played and was doing fine. I’m sure it wasn’t more than a little tweak,” said Garrard of MJD.

And of Fred Taylor; “Fred has looked good this week. He looks like he’s 25 years old and is as strong as ever.”

The match up between the Colts and Jaguars this Sunday will give the winner a big head start in the race for the lead in the always tight AFC South. It may only be week three, but Garrard knows starting out 0-3 is an ominous beginning which is why everyone will be motivated.

“I predict were gonna show up in Indy ready to play as hard as we can and let everything lay the way its going to lay,” said Garrard. “You can’t predict wins and loses but you can predict everyone showing up and giving 100% and that’s what it takes.”

Most Versatile Defender in the NFL – An Interview with Terrell...