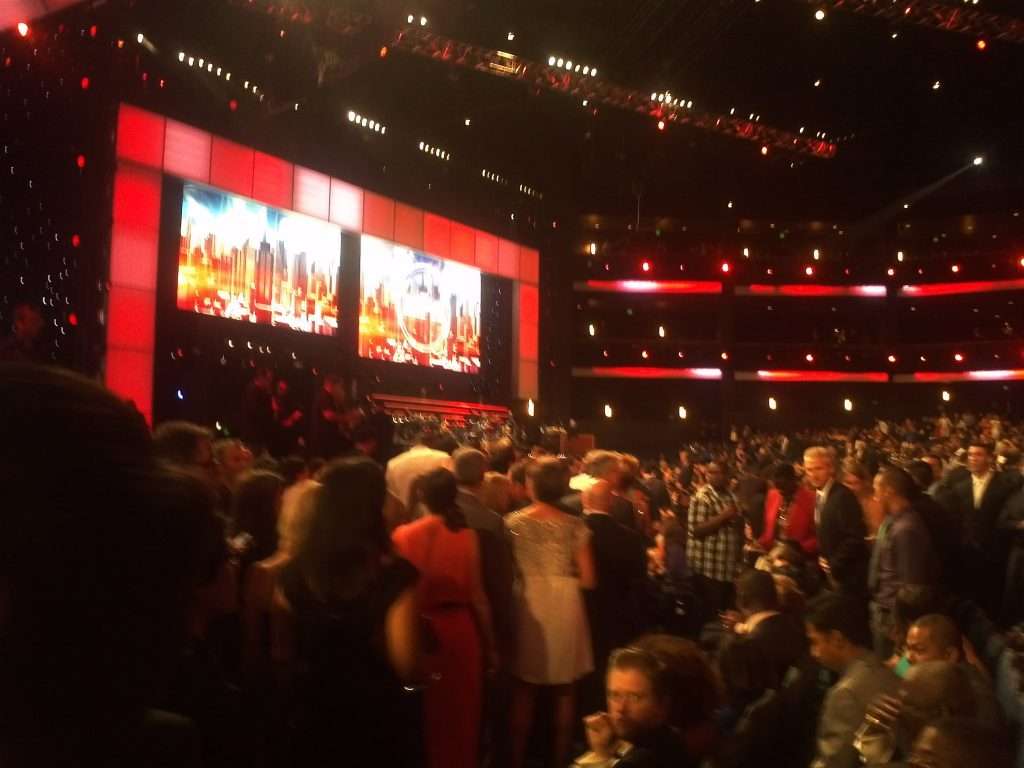 My first night in Los Angeles, I attended the BODY at ESPY’s Party which was a celebration of both the ESPY Awards the following evening, and also the release of the latest ESPN BODY issue.

Related – Jimmy Garoppolo: Best Ball You Ever Threw, Weird When 40+ Year Old Dudes Fan-Girl Over You?

The atmosphere at LURE night club was extremely intimate, as the party took place outside on a gorgeous L.A. night. Hennessy, one of the event sponsors, flowed freely and I highly recommend their take on a Mojito; it was delicious.

I spent roughly an hour of the evening talking to Bob Valvano, current national radio host for ESPN and brother of the legendary Jim Valvano.

Related – #SmellEm If You Got ’Em! All-Access At ESPYS And After Party

Bob kept encouraging me to try the doughnuts they were serving at one of the food stations and I kept declining until he came back with three of them, one for me, one for himself and one for his gorgeous lady friend Julie, from Kentucky.

The star of this party, and essentially the entire weekend, was 49ers quarterback Colin Kaepernick. Every time I saw him, he was surrounded by a slew of people, (mostly women) as everyone wanted a piece of his energy.

But the real story of night one was how many times I ran into Jimmy Butler of the Chicago Bulls.

It became an ongoing joke between myself and colleague Drew Garrison of SB Nation because every time we looked up, or turned a corner, we ran into Butler who was in great spirits.

DeMarcus Cousins was also a major force at this party, probably because he was the biggest person there, in the literal sense at the very least.

He spent most of the night hanging with former University of Kentucky teammate and current Washington Wizard John Wall.

Cousins is so big, young and agile, seeing him in person explains why teams are willing to take chances on him; he has all the tools.

The following afternoon, the Red Carpet Walk began outside of the Nokia Theater and was followed by the ESPY Awards.

DeAndre Jordan was the first NBA player I saw on the carpet and got myself right next to him to gauge his height.

One word to describe Jordan is LONG. For as big as Cousins is, Jordan was similarly built and incredibly long.

Dwyane Wade made a classic Hollywood entrance with girlfriend Gabrielle Union and was followed by Heat coach Erik Spoelstra.

WNBA legend Lisa Leslie was all smiles in a long white dress as she made her way into the event. At one point, Leslie stood directly next to WNBA rookie sensation Brittney Griner and even though Leslie had heels on, she was only an inch taller than Griner.

While “Wading” into the theater through the lobby, I again ran into Jimmy Butler and was literally sandwiched between first and second overall 2013 NBA Draft selections Anthony Bennett and Victor Oladipo.

Once into the theater, I stood next to Ray Allen for several moments as we waited for the mass of people to surge forward and I complimented his orange tie, which he appreciated.

“Thanks, man,” said the former Jesus Shuttlesworth. It was a great tie though.

Which is the awesome thing about the ESPYs- at any moment, you could look up and see an athlete you’ve watched for years and suddenly that person is THERE, right next to you, a few feet away.

The Miami Heat were up for about every award possible, either as a team or based on individual performance.

The crowd response to LeBron James was an interesting thing to be a part of.

There was a feeling in the room of being generally sick of him, and LBJ initially started out with a bit of an attitude.

But, he did a great job introducing Robin Roberts to the audience to receive the Arthur Ashe Courage Award and when James won Male Athlete of The Year, he was genuinely fun and engaging.

The ESPY’s Post-Party was the culmination of the weekend. Even though it wasn’t as intimate as the BODY Party, it was a great time filled with NBA players past and present.

The biggest thrill for me at the event, and maybe even the weekend, was getting to spend time with Lakers legend Elgin Baylor.

Meeting him brought out my inner nerd as I had to get a picture with him. Look for a forthcoming article about our conversation in the coming days.

As the night wore on and during the course of the evening I met comedian Chris Tucker, boxer “Vicious” Victor Ortiz, MMA analyst Kenny Florian and NFL Hall of Famers Jim Punkett and Terrell Davis.

Serving as celebrity DJ was none other than Biz Markie. Throughout his set he kept alluding to a “special guest” he had planned for later in the evening.

Then right around midnight, when the party was starting to wind down, Snoop Dogg aka “Snoop Lion” took over the tiny stage in the middle of the dance floor.

Flanked by DPG rapper Kurupt, Snoop went hard for about an hour and a half and played every Snoop hit you would ever want to hear. It was awesome.

It got to the point where you’d walk out of the main dining area where he was performing to get a drink from the bar and you’d hear Snoop in the background like you had previously at so many parties in your life, it felt like you were listening to a CD.

But it wasn’t a CD; it was the D-O double G himself.

The ESPY’s were fantastic. If you enjoy sports at all, you should really consider checking it out at some point in your life.

And if you don’t, Jimmy Butler will haunt your dreams.

Go to the Clear Men Scalp Therapy Facebook page for a chance to win tickets to next year’s ESPY Awards or for special offers. Clear Men stops dandruff at the source for 100% flake-free hair. Unlike other dandruff shampoos, Clear Men is great smelling and good for daily use.

Check out the image gallery below for exclusive ESPY photographs: