Gus Edwards’ fantasy value is at an all-time high – except no one knows.

But after reading this, YOU will know.

There are three things we know about Gus Edwards’ fantasy production after three years in the NFL:

Here is why I like Gus Edwards Fantasy value so much:

I am not worried about JK Dobbins – can someone tell me why I should be? Why is there so much hype/favoritism around Dobbins as the #1?

Dobbins vs. Edwards shouldn’t even be a thing. But it is.

At the beginning of camp, Dobbins and Gus Edwards were both listed as RB 1 on the Ravens official depth chart.

Based off of 2020 and the one year they played together, a few notable fantasy stats comparing Gus Edwards and JK Dobbins:

JK Dobbins and Gus Edwards were almost even in redzone carries in 2020 – 29 vs. 27. But, Edwards got the ones that counted:

Edwards is the big-bodied running back who stands in at 6-foot-1, 238 pounds and runs downhill and falls forward. Dobbins is smaller back at 5-foot-10, 212 pounds.

IDK about you but I want the guy that can take the pounding of a full 17 game season. And especially around the goalline.

Despite being the number two running back on his own team in 2020, he was 21st in the NFL in rushing yards.

In 2020 Edwards had the highest percentage of runs for first downs or touchdowns in the entire NFL. Look at who was second: 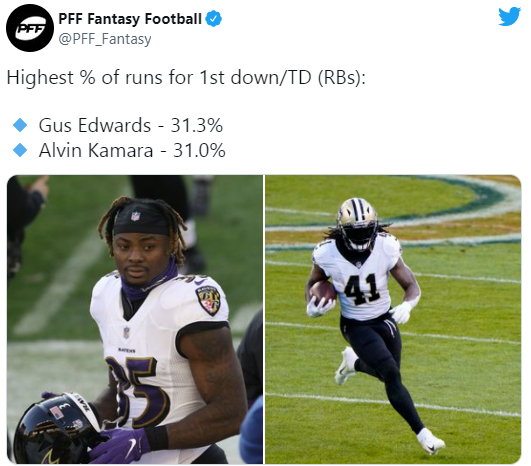 Edwards is one of only two players in NFL history to have recorded over 700 rushing yards and averaged at least five yards per carry in each of their first three seasons.

I could continue to pile on the factoids about why Gus Edwards fantasy value is ridiculously low. But that would just be piling on. Speaking of “piles” he has averaged at least 2.6 yards after contact for all three of his NFL seasons. Derrick Henry and Nick Chubb are the only other RBs to do that.

Reach on Gus Edwards in your fantasy draft and you can thank me later.