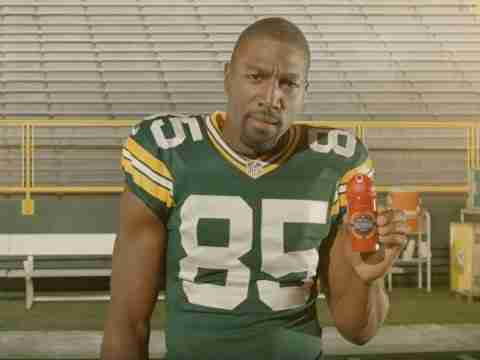 Greg Jennings, Super Bowl champion and two-time Pro Bowl selection (2010, 2011), didn’t disappoint when we discussed petting a grown man like a dog, his hate for Bears fans and who has better balls: Brett Favre or Aaron Rodgers.

Was it weird to pet a grown man like a dog?

Oh man it was real weird. It was spooky because it looked so realistic; it’s unbelievable, the process.

What’s the deal with Old Spice and how did you guys team up?

It’s all about the new Champion Scent and I was just working with Old Spice and the new ad campaign. There is more to come, but the first ad, me with my dog, just letting everybody know that if you believe in your “smelf”, anything can be possible. Your “smelf” is all about “smelf confidence” and making sure you can overcome anything getting the viewer and the fan to realize you can overcome any type of adverse situation if you use this Champion Scent from Old Spice.

So that was your dog in the ad?

That wasn’t technically wasn’t like, “my dog”, but it definitely was “my dog”.

Absolutely — “You did it Roscoe!”

Aaron Rodgers seems like a very low key guy who is easy to get along with- is that true? Does it make the relationship easier and more productive?

You’ve caught passes from obviously Aaron Rodgers and earlier in your career Brett Favre- who throws the ball harder?

I always have to tip my hat to Aaron simply because he is younger; I was with Brett in his latter stages. He has storied about guys with broken fingers on his resume, but when I was here definitely Aaron.

They both throw the most catchable balls. And that said, NO Homo. But they both have balls that…I don’t even like to talk about it. They both throw a really good uh… (laughing) balls.

How bad do you personally hate Bears fans?

When you get into games and say you’re playing a non-divisional rival, are you more motivated or are you always at the same level whether it’s a team like the Bears or not?

Um, pretty much it’s a different intensity overall of the game, the atmosphere. When you’re playing a team like the Bears or a division rival. Vikings even, Lions even. It’s just a different intensity. But when you’re out there competing it really doesn’t matter as an individual you go out there w the mindset that you gotta beat your opponent every single snap. That’s my mindset and as far as the Bears are concerned I shouldn’t really hate them, I should love them- they’ve always been so gracious to us (laughing). I had to get that in there.

Growing up in Michigan were you a Lions fan?

I was, I was. I hesitate to say I was a Lions fan because I was more of a Barry Sanders fan. I hated the Lions; but I loved Barry Sanders. I rooted for them because of him. But it was tough man. It’s great to see them having success now just because I’ve grown up watching them my entire life, but I don’t want them to have too much success, but, you know how that goes.

How different would your life be if John Skelton was your QB?

Uhh — a lot different. It would be a ton different.

Listen to the full interview here.