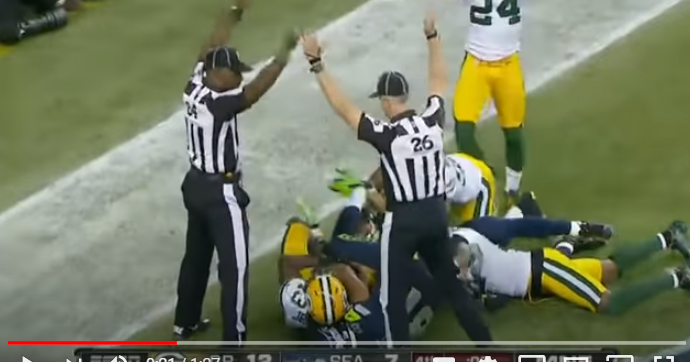 Goldengate – Forget what you know about the NFL. You can’t write this. Or can you?

Maybe you are writing this now. Only your thoughts are being projected as something that is already written? Like a shitty sports article. Like the one you are reading now.

You shake your head at the absurdity of the thought and you start to think about how you heard that Ed Huchuli is quizzing other real officials, so that their minds are sharp when they hit the thunder this coming Sunday.

You think about how absurd this last week was and you shed a tear, quietly, for you realize that scabbed referees will be the Tebow of 2011. And now, they are as obscure as the Tebow of 2012.

You will watch the rest of the season.

You will feign surprise when Peyton Manning is yanked in November.

You will watch the Saints fall into the abyss.

You will watch Robert Griffin become a man/king.

You will watch Mitt Romney lose in a landslide.

Goldengate: Golden Tate is one of the best football names ever.

Even better than Dane Sazenbacher. Adding the gate was genius, whoever coined that.

I heard Bill Simmons say it, so he probably stole it from one of his underlings at Grantland, slipped the guy a sea note and reminded him who was paying his kid’s healthcare.

The simultaneous, contradictory calls in the endzone as Golden Tate and M.D. Jennings MMA’d each other is the new David Tyree/Rodney Harrison jumping together in the Arizona night.

ESPN needs to get on this shit and start filming the 30 for 30. They could call it Goldengate.

Speaking of caps, the SF Giants sent this to Alex Smith after the Giants clinched the West. I would sell my soul for this memorabilia.

It’s one of the most beautiful things I have ever visaged. It’s wasted on on dumpster soup like Alex Smith.

But the question is begged now, are the Vikings any good–or was last Sunday their super bowl? The NFC North has the best collection of QBs.

Cam Newton: What an Emo assclown.

I swear, kids these days are the worst, especially dudes. We can’t even call anyone 25 or younger dudes anymore.

They are a collection of orgasm-numbed troglodytes addicted to sports video games. Even the NFL is not immune from these wrist-cutters.