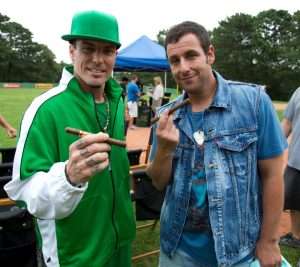 Remember when “Agent Zero” was “Agent Zero”? Now, courtesy of Vanilla Ice and his movie Cool As Ice, he’s more like “Drop Agent Zero and get with the hero.”

As of this very moment, who has more money: Vanilla Ice or Gilbert Arenas? According to Wikipedia, the “Iceman” is still worth $20 million dollars.  Arenas made $119 million dollars in his NBA career (including a staggering $19.2, a career high, in 2011-12) but how much does he have left?

Let’s be honest; a lot of people have already forgotten about Arenas and his ridiculous antics like wiedling a gun in a locker room poker game and his equally ridiculous, poorly done chest tattoo of a tiger. But the same cannot be said about one Robert Van Winkle.

Ice’s latest album is called “WTF” which accurately sums up Arenas’ playing career and relationship with Basketball Wives “star” Laura Govan. The former 2003 Most Improved Player winner with Golden State went on to sign with the Washington Wizards and in the next four seasons had average ppg totals of 19.6, 25.5, 29.3, 28.4 on his way to a six year, $111 million dollar deal with the club in 2008.

In the meantime, Arenas had four kids and multiple break-ups with Govan, who allegedly boned Shaq- talk about a “Shaq Attaq”!!

Prior to Arenas playing ball, “VI” was famously getting hung off hotel balconies by Suge Knight and extorted, but also famously “dated” Madonna, made a lot of bread and appeared on the hit TV show The Surreal Life. Believe it or not, “Ice” has had an incredibly well rounded career as a musician, actor, dancer and record producer; remember when he was in the Teenage Mutant Ninja Turtles movie Secret Of The Ooze and performed the song “Go White Boy Go”, but with the chorus changed to “Go Ninja Go”? Good times.

Oh yeah BTW, Arenas’ mansion is on sale for $3.5 million. And it has a shark tank.

So, whose life would you rather have?