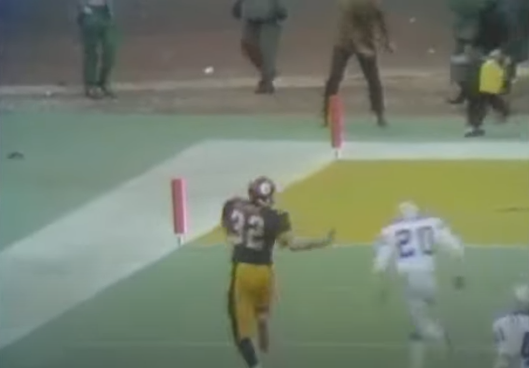 Franco Harris is a certified boss, but if you rewind to draft day in 1972, he never really wanted to join Terry Bradshaw and be a Steeler.

Franco Harris was the running back of arguably the greatest dynasty in NFL history. He was the 1972 Rookie of the Year, a four-time Super Bowl champion and a Hall of Famer, but that all could’ve never happened.

Rewind to draft night in 1972. Franco, sporting a baby face and a full afro, is sitting alone in his Penn State dorm. The phone rings. It’s his agent.

“Congratulations. The Steelers took you in the first round of the NFL Draft.”

Almost fifty years later, you’d be shocked to find out that this news brought him nothing but devastation.

Franco desired to go, and I mean this when I say it, anywhere else. After growing up in New Jersey and spending four years in Happy Valley at Penn State, this pick would send him two hours down the road to the worst team in the NFL.

What transpired after was nothing short of historic.

Franco’s career was lights out. When he retired, he was just 193 yards from beating Jim Brown‘s then record of 12,312 career rushing yards. He also would go on to nab four rings, and oh yeah… be a part of one of the most historic plays in NFL history.

We got the chance to talk to Franco Harris about his time in the league, and what he’s been up to amidst all of the craziness in the world.

I-80 Sports Blog: So tell us more about AdeNation. Tell us about how the “O Factor” will help us wash down all of those donuts.

Franco Harris: The “O Factor” is our difference. That stands for the osmolality of the product… Our osmolality number is one of the best out there, if not the best. AdeNation absorbs into your cells and bloodstream quickly and effectively to keep you hydrated and to ward of cramps or effects from dehydration. Check it out here: https://www.adenation.com/

I-80: How long have you had this product and why are you launching it now?

Franco Harris: We’ve been working on it for a few years, and it’s something that we felt that could be in the food business. It keeps you going and keeps your mind sharp. A few years ago I was traveling, and I got sick. I went to the hospital, and after running some tests, they said, “Franco you’re fine, but you’re dehydrated.” It really hit me, and got me thinking that now that I’m older, hydration and health is just as important now, as it was in my playing days. We worked on our formula, did some testing and voila.

I-80: So Franco, just some background on me (John), I’m a fellow New Jersey paisan. So I wanted to ask about Franco’s Italian Army. From what I understand, you got a phone call asking if they could use your name… How’d that conversation go?

FH: Well these are Pittsburgh Italians not New Jersey Italians, but it was so intersting. My rookie year it really started to take off. We were winning, and the fans were going crazy. This group of Italians were having dinner and drinking wine, and they wondered what could they do. They said it would take an army to keep the fans going, and someone said, “Hey there’s this kid from Jersey and he’s half Italian… maybe we can do, ‘Franco’s Italian Army.'” … So we got together and I said, “Let’s do it!” and it was incredible. One was a baker and the other was a pizza chef… the baker would make bread and hollow it out and put wine in it and make a priest carry it into the stadium… We’re still going!

I-80: What’s the biggest difference between being a sports celebrity in the 1970s compared to now?

Franco Harris: Well the number one difference is the money. The draft is also this week and that’s a huge difference. We had no one talk to us before the draft, no drills or combines. There was nothing. Scouts had to do it the old fashioned way… Back in the 70s we had our own scouting and reviewed things our way. Look at what happened during the 70s. The same thing is happening this year… there’s no parties or people getting together. Back in the day I was a first round draft pick, but I didn’t know I was going to be a first round draft pick. I didn’t talk to any team. There was no hoopla. I was just in my apartment at Penn State by myself that night, and I didn’t think I was going to be drafted… the phone rang and they said, “Congratulations. The Steelers took you in the first round of the NFL Draft.” And I was like, “No! That’s the one team I didn’t want to go to.” … Before 1972 they were the worst team ever in NFL football, but guess what? We kinda became the best team ever.

I-80: Can you take me into your mind on a third and one at Three Rivers Stadium? Everybody in the stadium knows you’re getting the ball. It’s late in the fourth quarter and you’re going to grind it out. How are you feeling? What are you thinking inside?

Franco Harris: My first regular season game… it did not go well at all. Raider guys were saying they were going to kill me. I didn’t have a good game.

The next game I played and I fumbled. The other team won, and I didn’t play in the game after that. I just kept saying to myself, “Keep working. Stay focused.” And then I said, “Next time they put you in, they’ll never take you out.” That was my focus.

In a game against the Oilers, the starter got hurt and they put me in and I had that mindset. That game I had my first 100 yard game and my first NFL touchdown. During those times when it was tough and we face those moments, you have to overcome those moments. It’s all about mindset on third and one. I always think about that on those third and ones and third and twos that we got it over 90 percent of the time. A real testament to our team was the 1976 season.

When we had to make plays… man, did our players make plays. That’s what makes the difference. When it’s time to do it, can you do it?