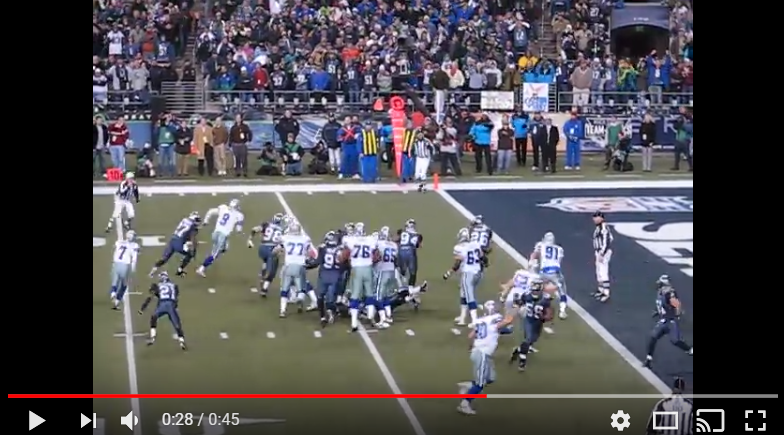 Had Jordan Babineaux not tackled Tony Romo in the 2007 NFL playoffs, NFL history would be different.

The Dallas Cowboys have won three playoff games since 1996; against the Minnesota Vikings that year, in 2009 vs. the hated Philadelphia Eagles, and against the Detroit Lions in 2014.

If it wasn’t for a mishandled Romo snap on a game-winning field goal attempt 12 years ago, and ensuing shoestring tackle by Seattle safety Babineaux, the Cowboys could’ve added another win.

The Cowboys trailed 21-20 with 1:19 to play in the fourth quarter of the wild card game in Seattle. Martin Gramatica lined up to attempt a 19-yard field goal with Romo as the holder. The ball slipped through Romo’s hands at the nine-yard line. He picked it up and attempted to run for the first down but was tackled short by Seahawks safety Jordan Babineaux at the two-yard line. Romo fumbled and Seattle recovered and ran out the clock.

“It just kind of happened,” said Babineaux of the play, which was voted “Play of the Decade” by Seahawks.com.  “The way it happened, it was like, ‘Are you for real?’ But it really didn’t sink in at first because it all happened so fast.”

“I mean once I saw him pick it up and run to the end zone I figured I had to get him. “But even thinking about it now, it was – wow. I can’t even put that into words, really.”

Here is the TV footage, which is interesting because Charley Casserly refers to Romo as “Tony Homo” on accident:

“To go from being an undrafted free agent, to that, was amazing. I was just trying to make a play. I would’ve definitely preferred it not come down to being that close!”