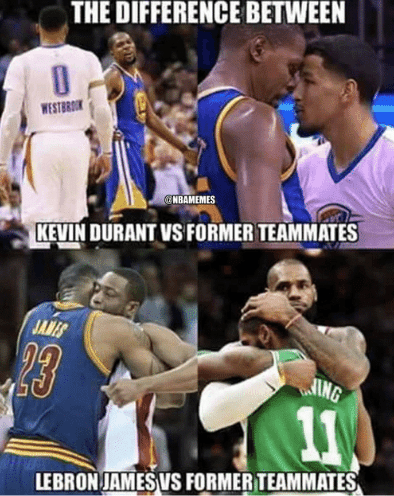 And I stumbled upon this classic piece from 2013.

The crazy thing is that both LeBron James and Kevin Durant are still consensus first round fantasy draft picks in 2020.

Not much fantasy slippage from 2013 to now.

As a much younger, and presumably, much “dummer” Paul Eide wrote in 2013:

If you’ve got the #1 pick in your fantasy basketball draft, you have a decision to make:  Who do you anchor your season around; LeBron James or Kevin Durant?

The first thing to consider is the type of league you are playing in; is it head to head or rotisserie? Is it standard scoring, or are there custom settings that make particular stat categories more valuable than others?

In standard scoring head-to-head leagues, players who score a lot but need a lot of shots to get going won’t hurt you. But in a rotisserie league their low field goal percentage will be detrimental.

Productive centers are as deep as they have been in recent memory, so unless you are hung up on getting Dwight Howard or Marc Gasol, you can wait on them, especially with the first pick.

Which brings us back to our original question – King James or Durantula at numero uno?

Again, depending on your league and which positions each player is listed at, James may have an advantage because of his versatility.

But from a pure statistical production perspective, who do you pick? Let’s look at the raw data.

Since LeBron took his talents to South Beach, his on court success has increased and while his numbers have been great, they have decreased in comparison to Durant.

Here is a comparison of his averages from his last three years in Cleveland, to his first three in Miami:

His per game averages are down right in line with playing a minute per game less. But is there any player in the league more consistent than LeBron?

If you’re in a fantasy league that puts heavy emphasis on field goal percentage, LeBron made .602% of his two-point field goal attempts last season and an insane .565 overall. LeBron is entering his 11th NBA season.

The three-time NBA scoring champ contributes across the board, as his career averages in six NBA seasons would indicate:

So, who do you pick first – LeBron or Durant?

Scoring is sexy and Durant does that better than anybody else in the league.

But, the decline of any NBA player is inevitable and you could argue that LeBron is due for that sudden decline.

Until the wheels fall off, I’m going with LeBron.

Here’s a video to aid you in your decision, or to waste time at work: