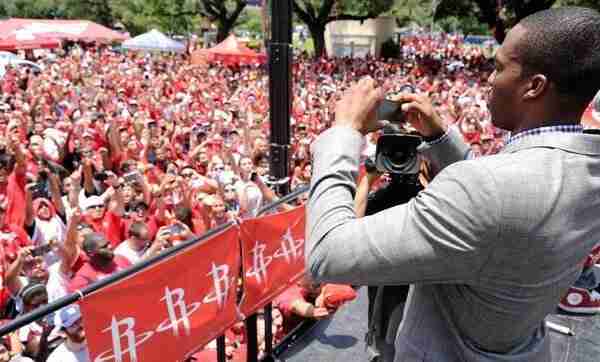 After being fined $150,000 earlier in the week for prematurely celebrating the signing of Howard, the Rockets did it the right way on Saturday. Optimism is as high in “H-Town” as its been since the days of Yao/T-Mac.

On Saturday, the Houston Rockets introduced free agent acquisition Dwight Howard as the newest member of the franchise.

“I’m just very excited to be here. Leslie and everyone at the Rockets have been great to me so far,” said Howard. “This is very special. Words really can’t explain how I feel about being here. It is a fresh start, a clean slate. I am looking forward to doing it in Houston with these beautiful fans behind me. I think it is going to be great. I am looking forward to embracing this city and giving them everything I got.”

The culmination of the rally was an outdoor press conference in front of an estimated 10,000 fans. A new brand strategy was revealed by the Rockets as well, “H-Town”, a play on the team’s home city and new teammates (and perceived team leaders) Howard and James Harden.

The fans were also treated to a video montage of Rockets history which featured Howard, aka “Rocketman“, in a digitally enhanced Rockets uniform, alongside legendary big men who preceded him in Houston; Moses Malone, Ralph Sampson, Hakeem Olajuwon and Yao Ming.

“Dwight is the biggest free agent acquisition in the history of the Rockets,” said Rockets owner Leslie Alexander. “His addition puts us in contention. This is good for the city and especially the fans. Fans are going to have a great time this year. This team will be tremendous fun to watch.”

While watching the highlight video you could almost feel Rockets brass attempting to woo disgruntled big man Omir Asik, as he got nearly as much face-time as Jeremy Lin and more than Chandler Parsons.

Keeping Asik happy would give the Rockets two of the best centers in the game at the thinnest position there is, league-wide. To re-visit the “Twin Towers” era by keeping Asik would be a nice way to “launch” Howard’s career as a Rocket.