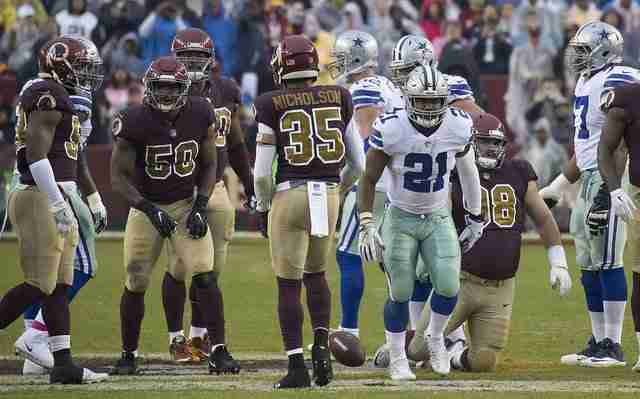 When Ezekiel Elliott arrived on the campus of Ohio State no one knew who he was.

And why would they?

Starting running back Carlos Hyde was coming off a junior season that saw him rush for 17 touchdowns and garner second-team All-Big 10 honors. Quarterback Braxton Miller finished 5th in the Heisman Trophy voting. Linebacker Ryan Shazier led the conference in tackles for loss and was second in total tackles.

The Buckeyes finished the 2012 season with an undefeated 12-0 record, but only ranked third in the AP Poll because of no playoff system.

“Coming in as a freshman and competing against all those future NFL guys, very good players like Ryan Shazier (Pittsburgh Steelers) and Carlos Hyde (San Francisco 49ers), it definitely pulls the best out of you,” said Elliott about his first year at Ohio State.

Elliott wasn’t the only freshman trying to figure out his place on the team. Defensive end Joey Bosa and linebacker Darron Lee were in the same exact spot.

“As freshmen, myself, Joey and Darron, we were roommates – we literally lived together, spent every day together. From when we arrived on campus not even two-and-a-half years ago, to see how we’ve all evolved as people in those couple years…how it all came together is really special, honestly. It’s giving me chills thinking about it right now. The hair on my arms is standing up.”

Elliott, Bosa and Lee were all first round draft picks – Elliott as the top running back, Bosa as the top defensive end and Lee as a top linebacker.

In Elliot’s his freshman season, and as part of a five-player rotation at running back in a talent-drenched OSU backfield, he scored three touchdowns on just 33 touches. But during his sophomore campaign in 2014, it all came together. And Elliott remembers the exact moment.

“When I really realized that I could do this – when I realized I could be the best in the nation – was during my breakout game when we played Cincinnati at home. I had like 180 rushing yards, 50 receiving yards, had a really good game. And the game of football just started coming to me so easy after that.”

Elliott’s 182 rushing yards against the Bearcats was a career-high that stood for the next eight games. The ninth game was the Big 10 Championship and the start of a three-game terror he went on to end the year and clinch a national championship for the Buckeyes.

In the Big 10 Championship against Wisconsin, he rushed 20 times for 220 yards and two touchdowns as Ohio State hammered the Badgers 59-0.

In the Sugar Bowl, also the first playoff game in the newly created postseason bracket format, he carried the ball 20 times for 230 yards and three touchdowns against perennial threat Alabama en route to a 42-35 upset win.

In the final game of the season, and biggest one of them all, Elliott turned in the best performance of his career (and MOST dude’s careers, for that matter) with a 36-carry, 246 yard, four touchdown gem in a 42-20 win over Oregon to secure the Buckeye’s first title since 2002.

“I was in a rhythm and the game was just coming so easy, and it was happening so slow. Every decision I was making was the right one. In that moment – in high school I went to three state championship games and lost all three – I was tired of losing championships. I felt like it was my time and I promised myself I wasn’t going to lose another one. And everything just went the way it was supposed to.”

“Going into that post-season, I was angry. That year, the Big 10 had a lot of great running backs; Melvin Gordon at Wisconsin, David Cobb out of Minnesota, Amir Abdullah from Nebraska, Jeremy Langford out of Michigan State. After all-conference teams came out, I was only selected as honorable mention and I was disappointed. I felt overlooked. And we were angry as a team. We were being overlooked. We went into the Big 10 Championship game as underdogs. We knew what kind of team we were – we were a national championship caliber team. Not everyone believed us but we went out there and played our best ball. And you saw the results.”

As a junior in 2015, with opposing teams gunning for him, he had only one game with less than 100-yards rushing. Elliott finished the season with 1,821 yards and 23 touchdowns and declared for the NFL Draft.

“That’s just how I live my life. That’s how I was raised, to demand excellence out of myself,” said Elliott about his production. And, his protection. “The new Old Spice collection is called ‘The Hardest Working Collection.’ It’s the strongest Old Spice ever created and it’s perfect for athletes like me who work hard, play hard, and demand more from their anti-perspirant. And, girls definitely love that Old Spice scent.”

In various mock drafts, Elliott was forecast anywhere from being selected by the Dallas Cowboys with 4th overall selection, to the Chicago Bears who own the 11th. The Cowboys reached on Elliott and he responded with one of the best rookie seasons in NFL history, leading the league in rushing and being named to the All-Pro team.

Prior to the 2016 NFL Draft, did it matter to him whether he got selected first overall or 10th overall?