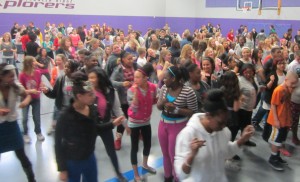 The most questionable and single most objectionable event I ever witnessed was watching a kid with down syndrome win the air guitar contest at my 7th grade mixer.

Sure, it seems harmless enough, doesn’t it? Cram about 300 prepubescent 7th grade boys and girls in a small place and serve Coke, while a rented DJ played the top 40 hits of the day, such as Bon Jovi and the Spin Doctors. (I guess some of us were more like post-prepubescent because we had pubes and we could get a boner when exiting our desk if we weren’t careful.)

Of course, nobody had the balls to dance, except like four chicks who had paired off in a group and gyrated in unison to Van Halen’s “Right Now”. But then, a strange thing happened. The DJ cut all the lights except for a menacingly large spotlight that pointed directly at the dance floor. Smoke billowed from well-placed smoke machines as visibility in the room dropped to zero. Then the voice of an over-enthusiastic DJ began booming through the PA system at decibels previously unknown to us young ass 7th graders.

Of course the response was extremely limited, as none of us had come there to “party”. We didn’t even know how to “party” unless he meant that one time dad came home on Christmas eve piss drunk on Wild Turkey, urinated on the Christmas gifts, threw the tree in the fire place and couldn’t take two steps without blaming “That goddamn Jesus!”  If that’s what he meant, then this couldn’t be a party because nothing was on fire yet. But, the DJ continued.

“WELL IF YOU GUYS CAME HERE TO PARTY I SURE COULDN’T TELL BECAUSE NOBODY’S DANCIN’!! COME ON GIRLS, THE GUYS WON’T BITE; THAT HARD!! HA HA HA!!!!

A comment like that would garner innumerable lawsuits in today’s world of pussy ass behavior, but it went right over our heads thanks to the smoke and boners that seemed like they would never subside.

“NOW IT’S THE TIME YOU’VE ALL BEEN WAITING FOR. THAT’S RIGHT, THE WAIT IS OVER, THE WESTSIDE MIDDLE SCHOOL AIR GUITAR CONTEST IS NOW UNDERWAY!!!”

And with that, the DJ cranked up Aerosmith’s “Walk This Way” and the contest began. The word contest implies 2 things: competitors and competition, two things that this so-called contest was sorely lacking.

At that point, the students of Westside Middle School needed one thing: a hero. With the rest of the student body in peril, someone had to answer this call to arms. One person did. And I mean one person. That person was Bobby Greenberg.

Sure, none of us really knew this kid because he didn’t really speak English and the safety helmet he always wore was semi-intimidating, and he used a walker, which scared everyone because of his infamous flaring temper.

By themselves, none of those things were that bad, but when you combined these volatile elements and remembered that he was wearing a helmet emblazoned with stickers of characters from The Simpsons, it was fuckin’ scary.

In the midst of the smoke, coke and boners Bobby Greenberg took off his helmet, threw his walker to the side and yelled a bunch of unintelligible jargon that could only be described as angry gibberish.

Suddenly, out of the smoke he emerged on the dance floor in the center of the spotlight, zipper down, shirt halfway over his head, arm swinging in a windmill motion like some Trojan warrior who loved Aerosmith. But, he wasn’t a Trojan warrior, he was retarded, something the DJ hadn’t been kept abreast of.

“WHOA ALRIGHT!!! I’M GLAD TO SEE SOMEONE CAME TO GET DOWN!! IF THAT GUYS NOT CAREFUL HE’S GONNA HAVE AN ANEURYSM AND LEAVE HERE RETARDED!!! I MEAN SLOW!!!!”

It didn’t matter to Bobby that he had been called a retard, he knew it and lived it. He also lived out his rock ‘n roll fantasy that afternoon as he did kick flips, the splits, and even did a pretty mean impression of AC/DC’s Angus Young.

“AS THE WINNER OF THE AIR GUITAR CONTEST, WE HAVE THE PERFECT PRIZE!!!”

All the 7th graders expected something cool for our bold, brash, newly crowned leader, but we were all left longing for something after the presentation.

“AND HERE’S YOUR PRIZE, BOBBY; A FULLY INFLATABLE GUITAR POOL TOY!! THAT WAY YOU CAN ALWAYS HAVE YOUR OWN AIR GUITAR!!!! GET IT!?! HA HA!!!”

Everyone in the crowd fell silent. You could almost taste the rage.

Bobby Greenberg tasted the rage. Fuck, he lived it and pay back is a bitch. Bobby emitted some sort of primordial scream, ripped the air guitar out of its package and began tearing it with his teeth! Being as though he was retarded, he had no sense that this could end badly. The guitar ripped in his mouth and the follow through caused him to hit the DJ in the mouth with his hand.

As a result, all the kids went ape shit and started breaking tables, trashcans, lunch trays and anything else they could physically destroy. Over the sound of cracking wood you could faintly hear the DJ attempting to re-establish order in what was now speeding towards a full-scale riot.

We didn’t want to hear the fucking Spin Doctors again, we wanted blood!! And so did Bobby. He removed his safety helmet and struck the DJ in the face with it. At the sight of his own blood, the DJ dropped his Mic and Bobby picked it up.

“Blahhhh POOO Blahh” were the last words generated over the P.A. System on that day, as Bobby was bum rushed by three security guards who swiftly beat the shit out of him in front of us.

That’s all it took to end the riot, because we didn’t think the administration had the balls to match our blood lust; but they did, so we all went home, played Nintendo, drank pop and went to sleep.

I can honestly say it was the most impacting experience of my life.