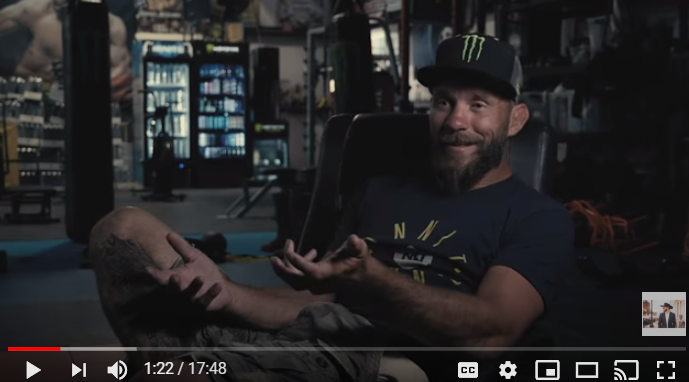 After you speak to UFC fighter Donald Cerrone, it becomes obvious why he has been a top-10 ranked fighter for over a decade – the guy never stops.

We spoke to Donald “Cowboy” Cerrone after a full day of training, between sips of his beloved Budweiser, and he gave us his six keys to success.

“Staying busy is just my approach to life. If you’re my friend and you hang out with me, some guys have to go home and take a break from livin’ life. Because we’re fucking full throttle all the time.

The next six weekends Thursday to Sunday I’m gone – NASCAR, sky diving – we’re just everywhere! We’re runnin’ and gunnin’ from sun up to sundown every day. I’m like Superman. As soon as I get out in that sun I just charge up for the day. And I’ll whip Batman’s ass, too.”

“It’s easy to talk and say, ‘I’ll fight him, shit. They call me out I’ll fight him.’ Until they call him, and they have to fight him right now! Then they’re like, “oooh, man. I don’t know. I’ve got this and that…”

3. Figure out what you love to do and do it as hard, and as frequently, as you can.

“Dude, check this out. We left the house at 8 AM this morning. It’s now 7 o’clock, we’re stopping at Wal-Mart to pick up some shit, then we’re going home. We’ve been gone all day. Right? Runnin’ and gunnin’! You know why? Because I thought I would be laying hardwood floors in Colorado. A construction worker. Middle class or working class, that’s where I was!

I just fought because I loved it – it was so fun! Being able to go in there and out think your opponents. It was so fun then and it still is today. I love training. It’s so much fun. And not only is it 10 years of fighting at the highest level, mother fucker, it’s 10 years in the top 10, baby! I ain’t just hangin’ on in this mother fucker! We just lost a championship fight, but I’m 11-1 in my last 12 fights. Against top ranked people. You know why? Because my fight camps are 365 days long! You don’t have to get ready if you stay ready, alright? I’m always in the gym, always training, all the time.”

4. Your friends don’t define you — unless you let them.

“The guys that I hung out with in high schoo, are still doing what they were doing in high school. It’s not that I don’t hang out with them anymore. Or I don’t call them once in a while. They’re just not in the same mindset of moving forward in life like I am. They’re kind of stuck. They found their girl, they’re stuck in their job for 15 years and that’s just what they do. And it’s not that those are bad things. Every year you gotta reinvent yourself. I gotta keep up with the young kids and just keep moving forward.”

“I was telling my coach yesterday, every year you’ve gotta reinvent yourself. You’ve gotta keep moving forward, you gotta keep pushing yourself. But for me, and my energy…if you call me this time next year, I better be driving a newer truck, living in a better house – I’m moving forward in life and that’s my plan.”

“It’s really cool to have a little kid come up to me and say ‘You’re my idol.” I’m like, oh man! You better pick a different dude bro!’ But it’s crazy and fun. I never would’ve expected it. Here I am and it is awesome. I’ll never turn down a picture. I’m honored every time someone asks me no matter where I am in the world.

“The sport has allowed me to live a crazier life, so it’s fun. I was just on a 10-day USO tour and it was really cool to see all the reactions that we got from those guys. And I tried to explain to them how honored I am to be a part of the greatest country in the world. They’re over there so I don’t have to wake up every morning and worry about walking down the street with people shooting at me, you know? I can literally wake up and do whatever I want.

“I got a super good girlfriend. She’s going to school to be a nurse practitioner, got a great head on her shoulders. She’s my diving buddy, my everything, man. So, that’s how I deal with women. When they come at me, I just back hand them bitches off and tell ‘em ‘I got a girl!’”