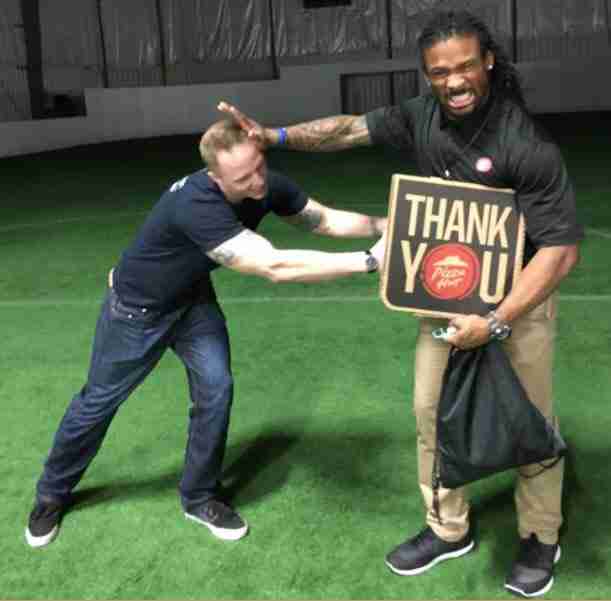 During the Super Bowl, Pizza Hut produces 2+ million pizzas that will be consumed by football fans as they watch the game. Among the fans is former Carolina Panthers and Pittsburgh Steelers running back DeAngelo Williams.

In 2000, the then 16-year-old Williams worked at Pizza Hut as a cashier, cook, and delivery driver.

“I grew up in the small town of Wynne, Arkansas, which had about 8,000 people,” Williams said. “You knew the people who were good tippers and definitely got those people their pizzas first.”

Pizza Hut is the largest pizza restaurant in the world.The culmination of the NFL standings is the Super Bowl, the largest delivery day of the year (2nd place goes to Halloween). To prepare, Pizza Hut hires an additional 11,000 employees.

Started by two brothers in a single location, they named the business “Pizza Hut” because the only piece of scrap metal they could afford for building signage could only fit a total of eight characters — five of them reserved for the word pizza — and one of the brother’s girlfriends said the building that housed the first store looked like a “hut.” Pizza Hut was born.

Once upon a time in Pittsburgh, I hung out with DeAngelo Williams and watched him put delivery drivers through various drills at the Pizza Hut Delivery Combine.

When he wasn’t scolding Pizza Hut delivery drivers, I challenged the Carolina Panthers’ all-time leading rusher to a 40-yard dash and whether he get his picture taken with the iconic Franco Harris statue at Pittsburgh International Airport like I did.

Paul Eide: Do you think I could beat you in a 40-yard dash? I bet I can hang with you for at least five yards:

DeAngelo Williams: “I’m still sore from the game (AFC Championship), but even being sore, I don’t think you would be any competition. I’m a sore winner and sore loser. No, not even for five yards. I can tell your first step is probably trash.”

On getting called into duty during AFC Championship and scoring a TD after Le’Veon Bell’s injury:

DeAngelo Williams: “My thing is this — and Coach Tomlin always says it shows my age and calls it a ’90s cliche’ — if you stay ready, you don’t have to get ready. Whether you’re a starter in this league or a backup, it’s a privilege to be in this league. You’re one play away from potentially being the starter. I tell the young guys all the time that if you have an ego in this league, it will put you out of this league.”

On who would win a fight between Steelers’ coach Mike Tomlin and his former coach in Carolina, Ron Rivera:

When you got to Pittsburgh, did you take a pic with the Franco Harris statue at Pittsburgh International Airport commemorating the Immaculate Reception, the game-winning reception from Terry Bradshaw to Harris?

DeAngelo Williams: “I think that is everyone’s first picture when they come to Pittsburgh. But that was not my first picture.”

“My first picture was with the dinosaur on the first floor, because my kids are huge dinosaur fans. When we got here, my kids were scared of it. I said, ‘It’s Franco Harris, it’s not real.’ They were so scared of it I picked them up. We went down to the second floor with this huge T-Rex and they were like, ‘Daddy let’s get a picture!”

What is your favorite type of pizza:

DeAngelo Williams: “Meat Lover’s pizza; that’s my favorite pizza of all-time. When I used to work there, I had my own recipe where I’d put the breadsticks on the outside over the crust. That way, I get the pizza and the breadsticks at the same time.”

Pizza Hut anticipates selling more than two million pizzas during the hungriest day of the year for pizza fans – enough pizzas to cover a football field twice or provide each attendee in Houston with 27.8 pizzas or 222 slices. Some other fun facts about Pizza Hut and the day of the big game include:

– The day of the Big Game is the highest tipping day of the year
– Drivers will log nearly five million miles on the day of the Big Game
– Most popular pizza topping is pepperoni
– Peak ordering time is exactly one hour before kickoff
– More than 50 percent of orders come via digital channels, i.e. apps, PizzaHut.com, Twitter and Facebook chatbot, Amazon Echo and others
– 94 percent of Americans eat pizza at least once a month
– Average American eats about 46 slices a year

1 thought on “DeAngelo Williams Used To Deliver For Pizza Hut”