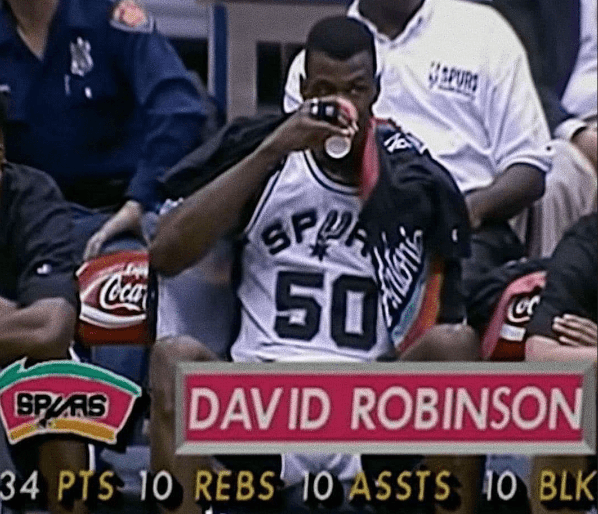 It happened during a Spurs win over the Detroit Pistons, the Spurs winning the game by 19 points.

On February 17, 1994, David Robinson aka The Admiral became the fourth player in NBA recorded history to record a quadruple double.

The quadruple double is possible the rarest individual statistical achievement in the NBA. Robinson is the only member of the 1992 Dream Team to accomplish the feat – something not even Michael Jordan did.

What Is A Quadruple Double?

Just like a double-double or a triple-double, a quadruple-double happens when a basketball player records double digits in 4 major statistical categories (points, rebounds, assists, steals, and/or blocks).

How many quadruple doubles have happened in NBA history? Only 4 players in NBA history have ever achieved it. There have been just four quadruple-doubles since the NBA started officially recording steals and blocked shots during the 1973-74 season.

After that, the second was defensive stud Alvin Robertson (February 18, 1986). While playing for the San Antonio Spurs, Robertson led them to a 120-114 victory over the Suns. His quadruple-double came on 8-17 shooting from the field and 4-6 from the free-throw line. Robertson had 20 points, 11 rebounds, 10 assists and 10 steals in 1986.

The third quadruple double happened in 1990, (March 29, 1990). Hakeem Olajuwon had 18 points, 16 rebounds, 10 assists and 11 blocks. Olajuwon led the Rockets to a victory over the Milwaukee Bucks, and against fellow quadruple double club member Alvin Robertson.

With this list, it would be great if the NBA would go back and total quadruple doubles for players prior to steals and blocks being official statistics.

Imagine how many quadruple doubles Wilt Chamberlain or Bill Russell would have.

But back then, not NBA game had limitless press in attendance, so it really is impossible to know.

On March 3rd of 1990, The Dream racked up 29 points, 18 rebounds, 11 blocks and 10 assists against the Golden State Warriors. But the NBA disagreed and added a stat correction.

Rockets coach Don Chaney and team media-relations director Jay Goldberg reviewed the game tape immediately after the final buzzer and “found” what seemed to be an uncredited assist for Olajuwon in the first quarter.

NBA director of operations Rod Thorn asked if he could take his own peek at the tape.

Three days later, Thorn announced his findings. Olajuwon didn’t deserve 10 assists, and the original box score that gave him credit for nine dimes would remain the official record of the game.

Do you think we will ever achieve the absolute MAX of a quintuple double?