The one thing sports journalists fear more than anything is to physically engage in the sports they write about in front of other people.

The only thing worse than that is engaging in those sports against other media members in front of some of the most iconic athletes in NCAA history.

And during CWS Omaha, Pizza Hut challenged me and other journalists to put up or shut up in the Pizza Hut All-American challenge.

The only hint the people we worked with from Pizza Hut gave to us prior to arrival was be “prepared to play sports.” And I cooly said to no one outside of my head, “Sports is my middle name.”

I accepted and the only thing I knew in advance is that Jason Williams would be there. And I was PRIMED to J up Jay.

No, not that one that killed his limo driver. No, not White Chocolate. But “Jay” Williams, a name he presumably gave himself to carve out his own career.

We got to the Rasmussen Center at Creighton University and immediately you could see multiple stations of all kinds of sports – lacrosse, whiffle ball, a football toss – and I knew it was about to be on.

Because every station was manned, or womanned, by a notable celebrity/athlete. As you can see in this video recap:

The resident stud at the whiffle ball homerun derby challenge was former MLB player Joe Carter, who hit the most memorable home run in World Series history in the bottom of the ninth to win it for the Blue Jays.

Tom Osborne was in charge of the football toss. Hanging out with TO, the greatest coach of any sport in NCAA history IMO, was the most surreal experience I have ever had covering sports and attending huge events like the Super Bowl, Indy 500, X-Games, ESPYs, you name it. Growing up in Nebraska, he was like a superhero. He wasn’t even a man, he was like a myth. The epitome of class.

I asked him to help me “loosen my arm” and we played catch for about 15 seconds. I could’ve just died right then, it would have been fine.

“Sorry Fiona, your dad died doing something he loved.” It would have made for a killer obituary.

Most of the other media members were from other states and had no idea of the significance of Coach Osborne, so he was standing by himself most of the day.

Which gave me more opportunities to talk to him. I tried not to be too annoying and he put up with me. Here’s an example:

Best player he ever coached? Said there was no way to pick overall, that he’d have to go by position and quickly selected Tommie Frazier as QB, Dave Rimington as offensive linemen.

Best rivalry? Oklahoma and briefly mentioned how he’d like to see the Colorado rivalry get restored.

We literally hung out all day.

Here’s a picture of me and my friend from 8th grade and Fiona’s Godfather Nick Wegman (check out his site Dadvice) asking him about modern o-line play vs. his/our era and why more teams don’t ditch the spread offense in favor of the I-formation. Real heady stuff. 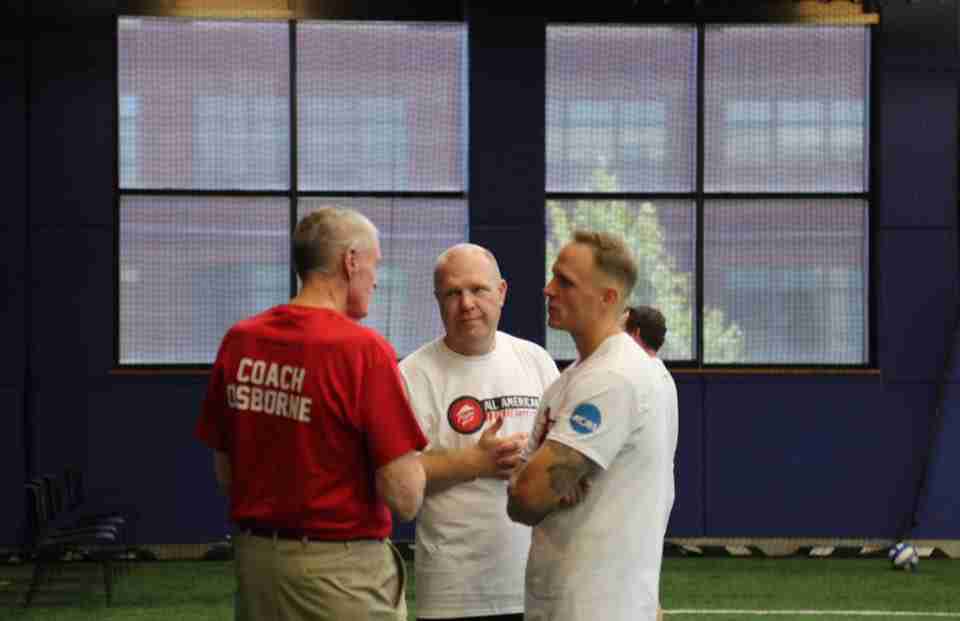 And then, I saw a basketball hoop in the distance. And guess who was in charge of the free throw challenge? Jay Williams.

I immediately went up to him, introduced myself, and challenged him – forget the media idiots I was surrounded by that couldn’t even spell free throw, they were nothing to me.

I came to this damn event to beat Jay Williams – and to completely destroy my friend Joe Kinsey from BustedCoverage.com. And I got it on video – Jay Williams and Joe – here is what happened.

I made 27 shots in 60 seconds. I immediately began talking trash and continued throughout Jay’s minute.

It was the exact opposite feeling of playing catch with TO. But honestly, Jay Williams (again, NOT the one that gunned down his limo driver in cold blood) was super cool, great personality, funny, got along with everyone.

He told me I had a great stroke and we both moved on with our lives.

Here were the NCAA studs that were on hand at the stations, coaching us, in order of popularity:

At the conclusion of the challenge, we were whisked away to TD Ameritrade Park, where CWS Omaha is hosted, for an all access tour.

Here’s me and the CWS Omaha National Championship trophy giving a postgame interview to a bunch of media scoundrels: 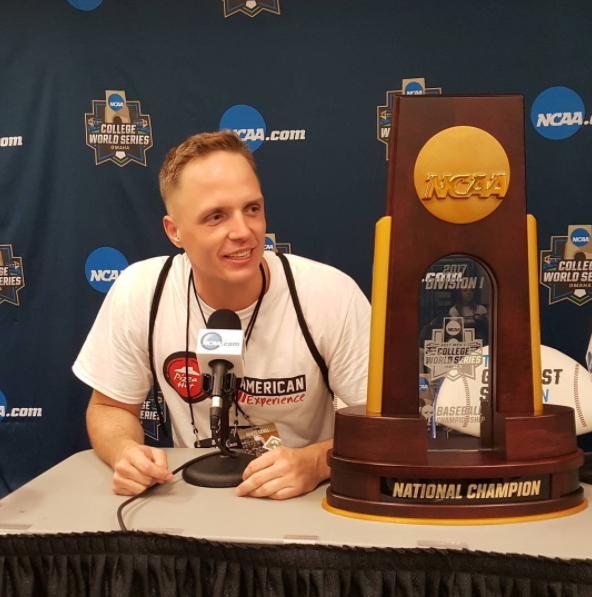 And me taking a selfie from center field: 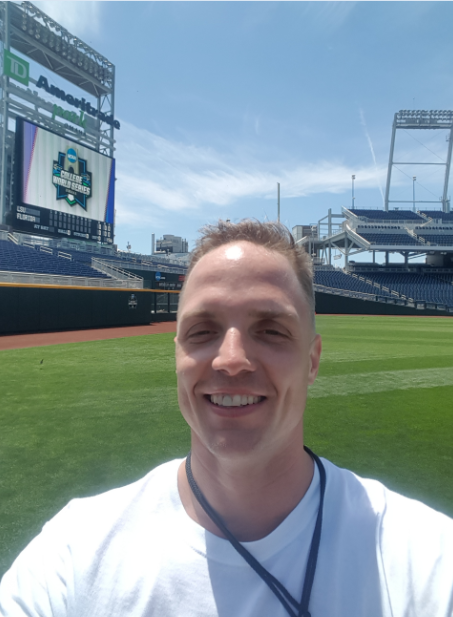 And from inside the locker room: 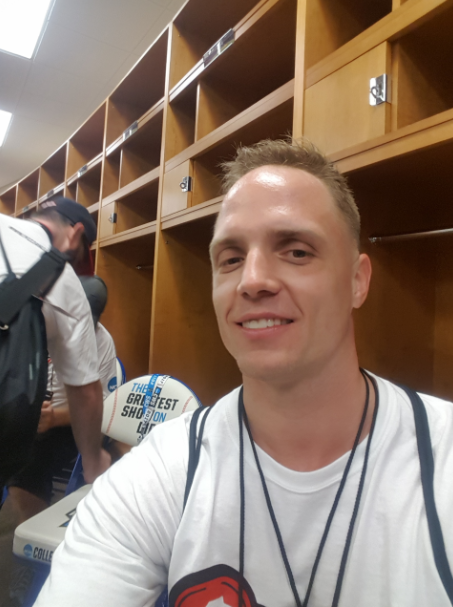 Here’s the view from the CWS Omaha pressbox at TD Ameritrade Park:

And the view from our suite where we watched Florida win the national championship: 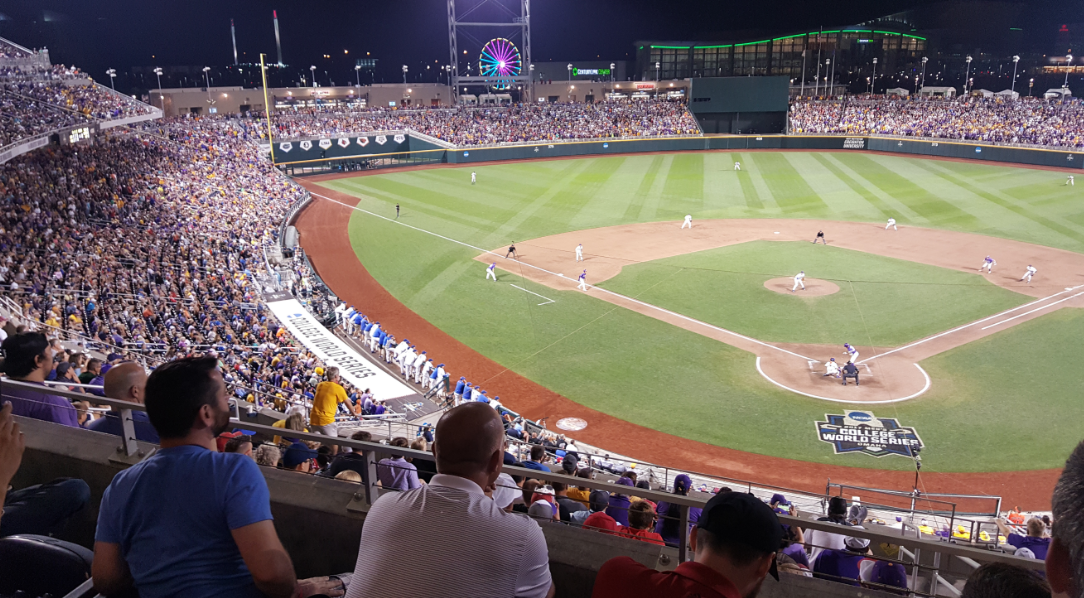 Not a bad day at the orifice! The CWS Omaha experience was an amazing one. There’s really no reason for me to ever go to another game because what could top it?

Except of course, beating Jay Williams (not the murderer) in SOMETHING.